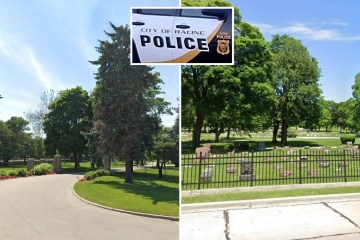 THE chilling confession of a boy, 15, who allegedly fatally strangled a six-year-old girl reveals horrific new details about a “shadowy man.”

A juvenile court judge recently ruled that Anthony Hutchens will be tried as an adult over one year after Grace Ross was found dead in a wooded area near Chicago.

But, the judge presiding over the teen’s murder trial ruled on Tuesday that two doctors will conduct psychological examinations to determine if he’s competent to stand trial.

Attorneys representing Hutchens have sought to have him declared legally insane at the time of the March 2021 slaying of Grace.

The youth’s mother has testified in court that he is on the autism spectrum, and has ADHD and a sensory disorder.

Authorities have alleged that he molested and killed Grace, whose body was found in a wooded area behind the New Carlisle apartment complex about 75 miles (120km) east of Chicago where they both lived.

Read more in the US Sun

Hutchens told police a “shadowy man” controlled him and made him strangle Grace after she followed him into the woods, according to court documents.

Grace, from New Carlisle, Indiana, was found dead less than two hours after she was reported missing by her family.

An autopsy found the six-year-old had died from asphyxiation.

St. Joseph Probate Court Magistrate, Graham Polando, decided that he would be tried as an adult in light of several factors.

The court was told these factors included steps taken to hide evidence such as his bloody clothes, and the very serious nature of the crimes alleged, reported South Bend Tribune.

Meghan playfully dotes on kids as she FINALLY reunites with Royals

RETURN TO THE FIRM

The paper said that Hutchens’ name was being published now as the case has been waived to adult court. He is currently in custody.

Polando wrote: “If the question is simply ‘should an ASD [Autism spectrum disorder] eighth-grader be in an adult jail?’ the answer is almost certainly ‘no’.

“On the other hand, if the question is ‘should a juvenile arrestee who there is probable cause to believe molested and murdered another child be around other children?’ the answer is similarly almost certainly ‘no’.”

Two doctors from the Kokomo area will evaluate the teen and submit their findings to the court.

Michelle Ross, Grace’s mother, said at a vigil last March: “Grace was loved by everybody and she was friends with everybody.

Tara Bush, the principal of the elementary school Grace attended, said: “You could tell she was smiling all the time.”

Grace Ross, 6, went missing at around 6.30pm on March 12, 2021 from a residential area in New Carlisle, Indiana[/caption] An autopsy found the six-year-old had died from asphyxiation.[/caption]

at June 02, 2022
Email ThisBlogThis!Share to TwitterShare to FacebookShare to Pinterest
Labels: BBC News