Politicians are wrong about what the public want 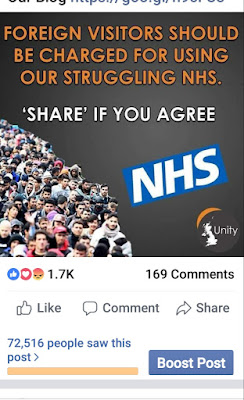 So the, out of touch political elite are trying to say that the public would be happy to cough up an extra £2000 a year, per household to prop up the NHS?
Advertisers website
Wrong! While many British families struggle to make ends meet, the political elite thinks that people will be glad to fund a failing business that is being run into the ground because of their failed policies on how the NHS is managed?
No. This just shows that we have monkeys running our country! Many people on Facebook have shared the above post on various pages; a large number of those people don't even do politics. If our political elite were more than just yes men weighed down by the chains of political correctness, they would see that the people of Britain have had enough.
Ever increasing taxation to try and fix their mistakes?
Continuiosly using the NHS as a stick to beat the opposition or a classic party political paper dragon! (Paper Dragon): a politician or political party who campaign to fox the problems they, themselves, cause or have caused by trying to ensure their political future! Some even create the problems intentionally so as to give themselves a reason to campaign (making themselves look busy).
The public are sick of self serving politicians who are detatched from the general public they are supposed to serve!
The revolution will come and only those truly democratic, populist politicos, with the courage of their convictions,  will survive.