Showing posts from September, 2019
Show All

September 30, 2019
On 9th April 2019 I encountered a political first, which after 40 years of active campaigning is increasingly rare. That evening, while canvassing for support in Eccles, a small working-class village in the otherwise prosperous and leafy council ward I represent in Kent, I encountered loathing and hatred. At door after door (I think eleven consecutive properties), they left me in no doubt that they hated who I was and everything I stood for. I have encountered anger before, which of us has not? During the Poll Tax, the ERM debacle and MPs’ expenses they hated what we had done. But this was different. Now they hated “us” for who we were and what we represented. It didn’t matter whether you were a Thatcherite Brexiteer like me or a patrician elitist Remoaner, we were all as bad as each other. We were “them” and we were out to do them over. And what’s worse, every one of those angry, betrayed and hostile people was a former Conservative pledge. And who can blame them? We promised (and
1 comment
Read more 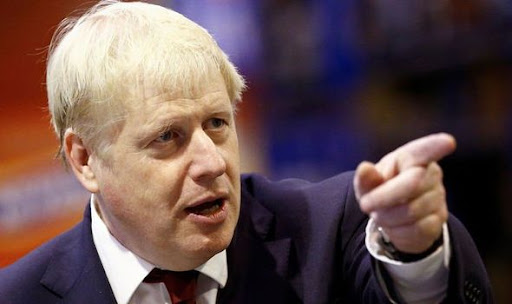 CONSERVATIVE friends of Europe are advertising for a paid intern to join their MEPs’ office in Brussels - a day after Britain leaves the European Union. Continued .... Read the full article Here
Post a comment
Read more

The MP, who worked for Boris Johnson when he was London mayor, referred to the riots that erupted in the capital in 2011, saying: 'I never want to go through something like that again.' * This article was originally published here
2 comments
Read more 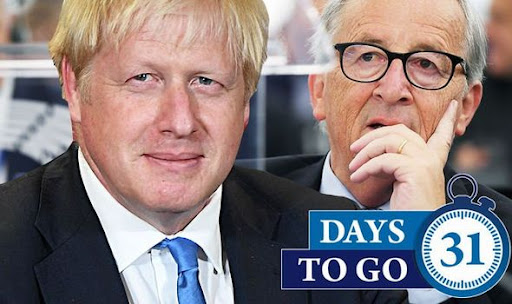 BORIS JOHNSON’S secret Brexit plan is finally finished and proposals could be sent to the European Union as early as this week, raising hopes the UK will leave the bloc with a deal in place on October 31. Continued .... Read the full article Here
Post a comment
Read more

BORIS JOHNSON’S secret Brexit plan is finally finished and proposals could be sent to the European Union as early as this week, raising hopes the UK will leave the bloc with a deal in place on October 31. Continued .... Read the full article Here
1 comment
Read more 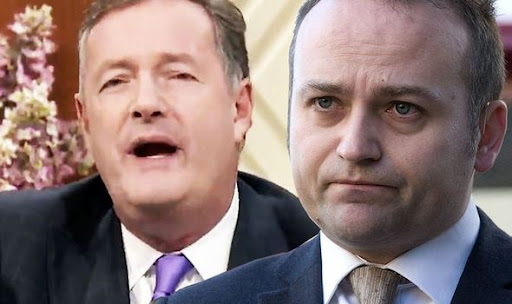 PIERS Morgan has rejected an apology from a Labour MP who told the Good Morning Britain host to “go f*** himself”. Continued .... Read the full article Here
Post a comment
Read more 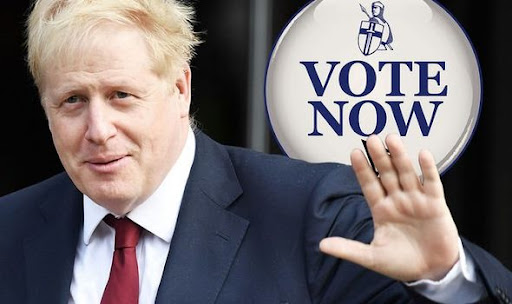 BORIS JOHNSON has repeatedly promised to secure Brexit by October 31, but as the deadline looms Express.co.uk is asking if you believe him. Continued .... Read the full article Here
2 comments
Read more

Boris Johnson will submit his formal 'final offer' to Brussels next week as the Prime Minister's bid to strike a Brexit deal with the EU enters its final phase. * This article was originally published here
Post a comment
Read more 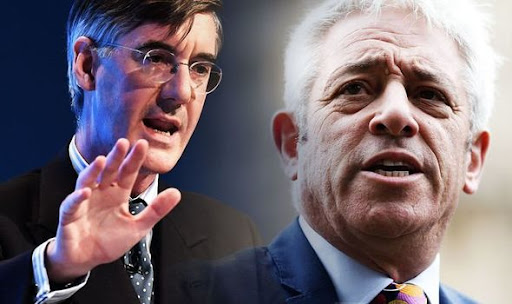 JACOB REES-MOGG launched a blistering attack on John Bercow as the reputation of the House of Commons has plummeted to “the lowest point in history” in the eye of the public. Continued .... Read the full article Here
1 comment
Read more

When will you apologise? Javid confronts McDonnell on praise for IRA ‘bombs and bullets’ 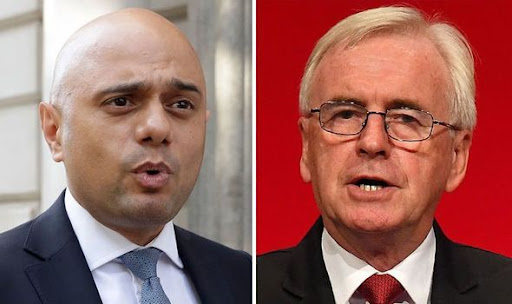 SAJID JAVID has hit out at John McDonnell over his praise for the IRA after the pair became involved in a Twitter row. Continued .... Read the full article Here
1 comment
Read more 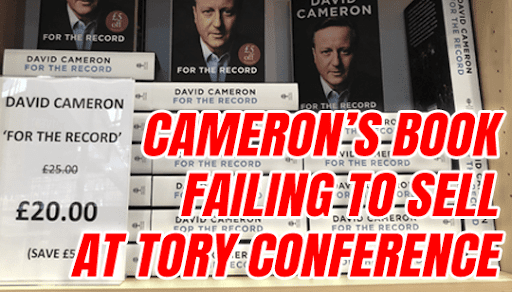 The signs were never good for David Cameron’s autobiography, following reports of slow pre-orders and backlash over publishing the memoirs at such a fractious political moment; however a sign – if one was needed – of how much he is struggling to flog the book can be seen at the Tory conference bookstall, where the book is currently reduced by 20%. For comparison, Thatcher’s books are selling very well at full price… Perhaps spurred on by this, May announced at the Henley Literary Festival today that she has no plans to write an autobiography. Writing a memoir is not something Theresa May is rushing to do. Did she keep diaries? “there honestly wasn’t time!” #TheresaMayHLF pic.twitter.com/TMmTEeBMlw — Henley Literary Fest (@HenleyLitFest) September 30, 2019 This does presume May could actually find a publisher willing to take her on of course… The post Cameron’s Memoirs Reduced by 20% at Tory Conference appeared first on Guido Fawkes . * This article was originally pu
Post a comment
Read more 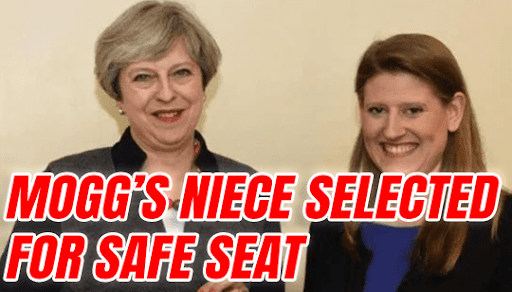 Jacob Rees-Mogg’s niece, Theo Clarke, has been selected as the Tory candidate for Stafford, following Jeremy Lefroy’s announcement that he will be standing down at the next election. With Jacob, Annunziata and now Theo, the Rees-Mogg dynasty has almost taken over… Theo – who previously described her uncle as “ a well-spoken mortician, come to collect the corpse of compassion ” – is the daughter of Jacob’s wife, and named after her relative and former US president, Teddy Roosevelt. Guido also hears she is currently living at Sandon Hall, the 19th-century country mansion her boyfriend’s parents own.  In keeping with the Rees-Mogg namesake The post Rees-Mogg’s Niece Selected as Tory Candidate appeared first on Guido Fawkes . * This article was originally published here
Post a comment
Read more

BORIS JOHNSON has received a huge boost after Liberal Democrat leader Jo Swinson ruled out holding a vote of no confidence in the Government this week, claiming it would “play” into the hands of the Prime Minister. Continued .... Read the full article Here
Post a comment
Read more 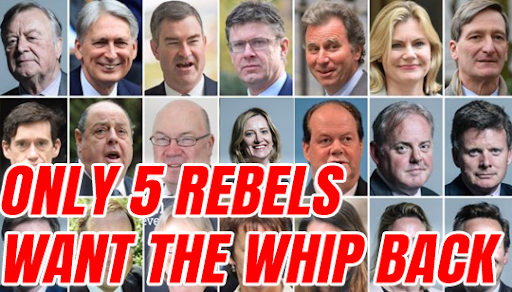 Only five of the 21 expelled Tory rebels still wish to return to the Conservative Party, according to a senior One Nation source. Namely, Amber Rudd, David Guake, Richard Benyon and Stephen and Philip Hammond.  You couldn’t guess some of them want to return given how they’ve been behaving since losing the whip… Whilst it was obvious some of the cohort – such as Sam Gyimah who is now a Lib Dem, and Rory Stewart who plans on standing as an independent – had given up on rejoining to Tory Party’s loving embrace, it was still assumed the majority of independent remainers would look at regaining the whip once Brexit is sorted.  It’s also believed that only Rory has any chance of keeping his seat if standing as an independent… In other wet Tory news, the Tory Reform Group held their one nation drinks reception yesterday, during which Justice Secretary Robert Buckland said multiple times “ I am the law”  and one member fainted.  They’re truly dropping like flies… The post Only Five of t
Post a comment
Read more 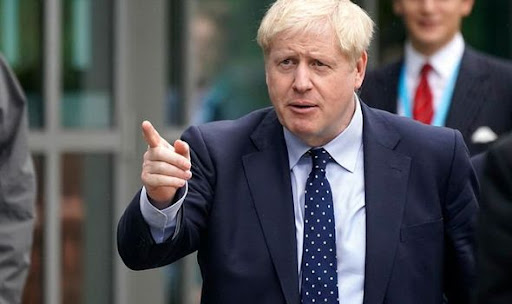 BORIS Johnson has warned there will be “consequences” following the Supreme Court’s decision to rule his prorogation of the Parliament for five weeks ahead of Brexit unlawful. Continued .... Read the full article Here
Post a comment
Read more Despite reports of a rift between Boris and Crosby, it looks like Boris has accepted Crosby’s advice in at least one respect – the next Tory manifesto is set to be a short one. Despite Boris having a better track record of levity than brevity… Speaking at a Women2Win fringe event late last night, the PM said “And if you want any evidence – any further evidence – to our commitment to having a wonderful agenda not just for women but for the entire country, I can tell you that we […] already have a Conservative manifesto for the next election (which will be a short and concise… with no hostages to fortune) being drawn up by two particularly brilliant women” As Tim Shipman detailed in Fallout , Crosby implored May to release a very short manifesto that only covered Brexit, to ensure the election didn’t get derailed by other more contentious policies – the election guru even suggested May didn’t release a manifesto at all. Nick Timothy, however, overruled him, leading to the disastro
Post a comment
Read more 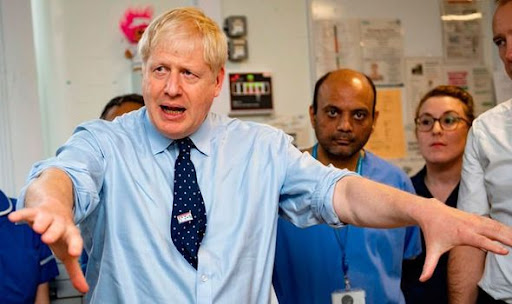 REMAINERS are hell-bent on forcing another Brexit referendum which they would “rig” to make sure they did not lose by offering votes to “16-year-olds and foreign nationals”, Theresa May's former chief of staff Nick Timothy has claimed. Continued .... Read the full article Here
1 comment
Read more

Grieve and Gauke at Tory Conference Despite Voting Against It 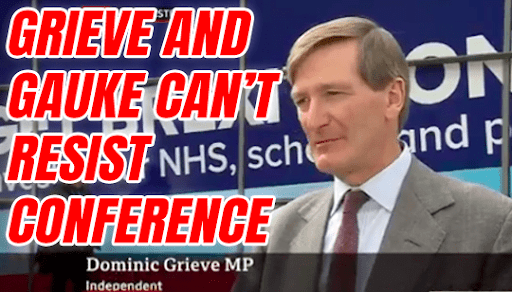 Expelled Tory MP David Gauke has been spotted arriving at the Raddison Blu hotel just outside the Tory conference secure zone – despite having just voted against allowing a recess for the conference. Fellow expellee Dominic Grieve has also spent a couple of days doing fringe events – including one with Jacob Rees-Mogg. They clearly can’t resist the attention… Gauke has three fringe events scheduled, including one tonight with fellow expellee Dominic Grieve on why a no deal Brexit would be bad for the country; however Guido has been tipped off a group of pro-Brexit young Conservatives plan on gatecrashing the event to heckle. Wonder whether Gauke and Grieve will regret turning up after that…   The post Grieve and Gauke at Tory Conference Despite Voting Against It appeared first on Guido Fawkes . * This article was originally published here
1 comment
Read more
More posts