FOUR people were killed when homes were hit by a Russian missile aimed at an Ukrainian military base, a senior official has said.

Anton Gerashchenko, adviser to the Ukrainian interior minister, said on said the residential buildings near the base of the 95th Airborne Brigade in Zhytomyr.

“So far, four people have died. Including a child,” he said.

Video from the scene showed firefighters picking through the smouldering wreckage of what remained of the homes.

Flames continued to pour from buildings in the aftermath of the missile strike.

It comes after Russia today issued a chilling warning for Ukrainians to flee parts of Kyiv NOW ahead of another massive bombardment.

At least five people were killed after Russian missiles rained down on the city, hitting a Holocaust memorial and the biggest TV mast in the Ukrainian capital.

The attack on the Babyn Yar memorial, the site of one of the Nazis’ deadliest individual war crimes, sparked outrage across Ukraine.

Between September 29 and 30, 1941, the Nazis and their collaborators murdered more than 33,000 Jews, dumping their bodies in a ravine.

It was the largest single massacre in the history of the Holocaust up to that point.

Decrying Russia’s apparent indiscriminate targeting of a non-military site in Kyiv, Ukraine’s President Volodymyr Zelensky tweeted: “To the world: what is the point of saying ‘never again’ for 80 years, if the world stays silent when a bomb drops on the same site of Babyn Yar?

Tonight, footage showed a fireball erupting next to the TV transmitter tower where the Holocaust memorial is located – temporarily knocking out all broadcasts.

The interior ministry said equipment had been damaged and “channels won’t work for a while”, but services resumed soon after.

It comes after Vladimir Putin’s defence ministry warned targets in the centre of Ukraine’s capital will be hit with “high precision weapons”.

Russian marines ‘MUTINY on warship and refuse to fight in Ukraine', reports claim

On Tuesday, a 40-mile column of Russian armour and artillery was pictured on the outskirts of Kyiv with fears looming of an even heavier onslaught after six days of war.

Russian forces are believed to be aiming to seize the capital and topple the government led by President Volodymyr Zelensky.

But Putin has been frustrated by the fierce resistance to his invasion, with Ukraine’s forces so far holding strong.

A senior US defence official has said it believes morale is flagging in some Russian units, and that some of Putin’s forces have surrendered in Ukraine without a fight.

The same official is quoted as saying Russia’s onslaught on Kyiv has stalled.

Fears are spreading that Russia will turn to more indiscriminate bombing in a bid to weaken the Ukrainian resolve.

Earlier the Russian defence ministry announced it was planning strikes on the Ukrainian security service and its alleged “Psyops Unit” in central Kyiv.

Spokesman Igor Konashenkov said: “In order to suppress information attacks on Russia, the technological infrastructure of the SBU and the 72nd main PSO (Psychological Operations Unit) centre in Kyiv will be hit with high-precision weapons.

“We call on… Kyiv residents living near relay nodes to leave their homes.”

Meanwhile, residents armed themselves with guns and Molotov cocktails as they prepared for what could be a prolonged siege.

Makeshift barricades of tyres, trucks and wheelie bins have been erected ahead of the defence of Kyiv.

Signs also appeared in the capital which read: “Russian soldier, go to f***”.

Others read “Putin is lost” and “The entire world is with Ukraine”.

Western officials fear Putin could unleash barbaric new attacks as the invasion is not seen as going to plan.

Russian commanders are believed to have thought they could seize Ukraine within 48 hours.

But now the invasion has lasted almost a week and they have so far failed to capture a major city.

Putin’s growing frustration could lead to an even more vicious and indiscriminate campaign to break their resistance, analysts fear.

Ukrainian authorities have accused the Russian army of carrying out strikes on residential areas in several cities, including the eastern city of Kharkiv, where fierce fighting is taking place.

Russia however insists it does not target civilians, despite overwhelming evidence otherwise.

Putin’s forces pressed their attack on other towns and cities across the country, including at or near the strategic ports of Odesa and Mariupol in the south.

And they launched a massive strike on Kharkiv, killing at least ten people.

Day six of the biggest ground war in Europe since World War 2 found Russia increasingly isolated, beset by tough sanctions that have thrown its economy into turmoil and left the country almost friendless. 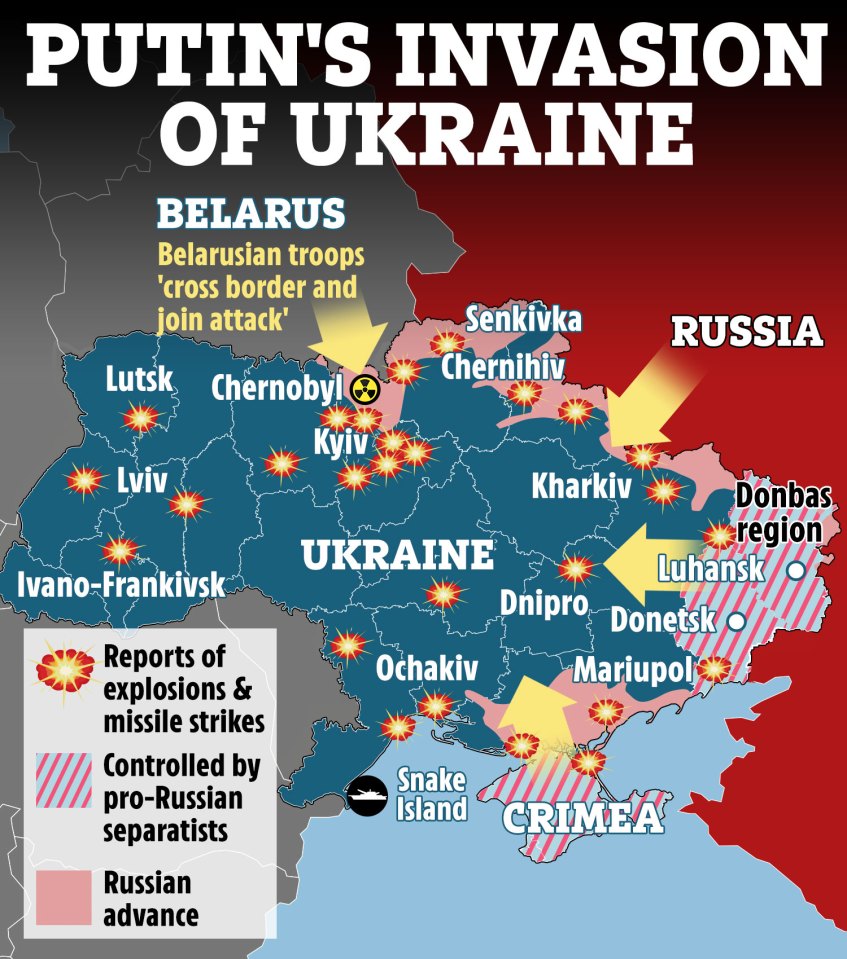 But a senior Western intelligence official estimated Tuesday that more than 5,000 Russian soldiers had been captured or killed.

US officials also believe Russia has not yet managed to win control of the airspace – and so far 400 missiles have been launched at Ukraine.

It came as Ukraine claimed that Belarus troops stormed across the border in the north to join the Russian invasion.

The huge 40-mile convoy of Russian tanks and armoured vehicles is already inching closer to the Ukrainian capital as fighting intensifies on the ground.

Putin’s puppet leader Lukashenko has already allowed the Russian president to use Belarus as a staging post for his forces.

A blast is seen at one of the main TV towers in Kyiv[/caption] Ukrainian soldiers stand in the aftermath of an overnight shelling at the Ukrainian checkpoint near Kyiv[/caption] Kyiv residents make Molotov cocktails ahead of the Russian attack[/caption] The attack on the Babyn Yar memorial (pictured), the site of one of the Nazis’ deadliest individual war crimes, sparked outrage across Ukraine[/caption] Sand is dumped on the street is Kyiv to act as a makeshift barricade[/caption]

Images have emerged in recent days appearing to show trains stacked with tanks arriving in the city of Brest in the south west – and there have been reports of missile and aircraft launches from Belarus.

And meanwhile, President Zelenskyy addressed the European Parliament after yesterday requesting to join the EU.

He accused Russia of “state terrorism” over a missile strike on Ukraine’s second largest city Kharkiv.

“We are fighting also to be equal members of Europe. I believe that today we are showing everybody that is what we are,” he said.

“We have proven that, as a minimum, we are the same as you.”

Zelinsky received a round of applause as the war continues for its sixth day and Ukraine remains under siege.

All you need to know about Russia's invasion of Ukraine

Everything you need to know about Russia's invasion of Ukraine...

Nato’s chief Jens Stoltenberg today called on Russia to withdraw all its forces – and said Belarus was “enabling” the war.

Speaking at the Tapa military base in Estonia, he said: “That is the reason why we need to continue to provide support to Ukraine, why we continue to call on Russia to stop this bloody war and why we need to impose costs by the heavy sanctions on Russia.”

Putin’s troops are believed to be looking to surround Kyiv after earlier attacks by advanced forces were repelled in fierce battles.

Kyiv is bracing itself for a further onslaught after the Russians unleashed hell on Ukraine’s second city Kharkiv using deadly cluster bombs.

People walk by a damaged vehicle and an armoured car at a checkpoint in Brovary, outside Kyiv[/caption] People board an evacuation train at Kyiv central train station[/caption] Ukrainian soldiers stand guard amid ruined cars near Kyiv[/caption] A massive column of Russian armour moving towards Kyiv[/caption]

at March 02, 2022
Email ThisBlogThis!Share to TwitterShare to FacebookShare to Pinterest
Labels: BBC News

POLL: Is Rishi Sunak trying to ‘water down’ Brexit?