MUMS and grandads pledged to fight Vladmir Putin’s army to the death today – as they trained for war in Ukraine holding wooden rifles.

Volunteers in tracksuits were put through their paces as a key Putin ally boasted the feared invasion will be over “in 48 hours”.

This grandad is one of 600 new recruits in Ukraine’s Self Defence Force volunteer army[/caption] Mums and dads from all walks of life are training with wooden guns[/caption] Recruits will get real weapons later, ready to bolster defences against a Russian invasion[/caption]

In an inspirational show of grit, hundreds of ordinary folk assembled for military drills in snow-covered abandoned railways sidings outside the capital Kiev.

The Self Defence Force recruits cut a touching Dad’s Army dash as their rag-tag ranks lined up in an assortment of winter coats and sportswear.

Commanders vowed they would be fully armed within weeks and ready to help face down the Russian troops and heavy armour surrounding their nation.

The ranks of the partisan-style force have now swelled to around 600 in Kiev with dozens of new rookies joining every day.

Once trained they will link up with regular army units or join an urban guerilla war to tie up Russian forces in bloody house–to-house battles.

Andrew, you have the PR skills of a wasp - don't make a fool of our Queen

DRIVEN UP THE WALL

They face a fearsome invasion force including the latest T-72 battle tanks and high-tech rocket launchers.

Fears of an imminent invasion ramped up further today amid reports that Russia was now shipping supplies of life-saving combat medicines and blood to forward positions.

Boris Johnson is set to visit the region and will speak to Putin on the phone in an effort to make him pull back from the brink.

But a close Kremlin insider today blamed the West for the looming bloodshed – and predicted Russia will sweep away all resistance inside two days.

Media tycoon Konstantin Malofeev said: “Open military conflict between Russia and Ukraine cannot be a war, or, at least, a long-term war, because the difference in military potential is so big that there can be only an operation for forcing the peace.

“It will take 48 hours maximum, and we cannot talk about different fronts.”

He also claimed that Ukraine was under the sway of US and British “Anglo-Saxon” secret services.

“The invasion has already happened,” he said.

“We know that Canadian special forces have arrived in Ukraine.

“Therefore we can expect provocations on the border with DPR (rebel-held Donetsk People’s Republic) and LPR (Luhansk Peoples’ Republic).

“Let’s see if their masters will be ready to make peace without shedding the blood of Ukrainians and Russians, or they will drag the Ukrainians into this crazy and suicidal conflict.”

Analysts fear Putin will use these as a pretext for war, claiming he is defending ethnic Russians.

It was taken as another signal the Kremlin is trying to annexe the territories, after it granted half a million passports to people in eastern Ukraine.

Russia insists it has no plans to invade and the huge military build-up is part of joint exercises with Belarus.

A battle group of 20 warships has also sailed into the Black Sea to Ukraine’s south as part of separate war games.

Joe Biden has said he is ready to move thousands of US troops to Ukraine’s western borders in a show of force.

The Pentagon’s top general, Chairman of the Joint Chiefs of Staff Mark Milley, said the troop build-up is the biggest since the Cold War.

He said yesterday: “Given the type of forces that are arrayed … if that was unleashed on Ukraine, it would result in a significant amount of casualties.

“You can imagine what that might look like in dense urban areas, along roads, and so on and so forth. It would be horrific. It would be terrible.

“And it’s not necessary. And we think a diplomatic outcome is the way to go here.”

Ukrainian soldiers train with NLAW anti-tank missiles supplied by the UK[/caption] Ukrainian artillery units train with 2A65 Msta-B howitzers and anti-aircraft guns[/caption] Ukrainian cavalry inspect tanks ready to defend the country against an invasion[/caption] More Russian warships have sailed into the Black Sea amid fears of all-out war[/caption] Putin’s forces fire field guns in drills in southern Russia[/caption] A fearsome invasion force is lined up near the border, including T-72 tanks[/caption] 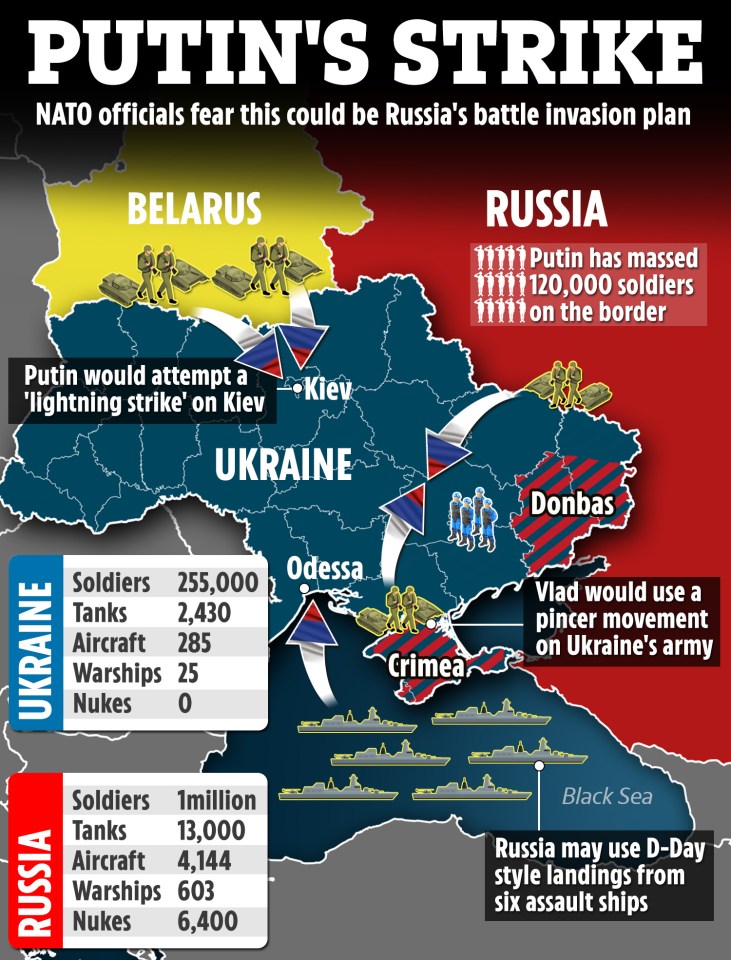