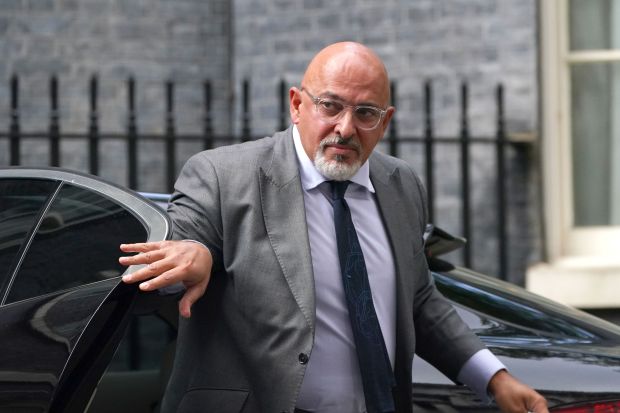 Ms Truss was given the job after Dominic Raab, a close ally of the PM, botched Britain’s exit from Afghanistan last month.

Nadhim Zahawi has been rewarded for his work as vaccines minister by taking over from Mr Williamson as Education Secretary.

But three other key Boris-backers in the 2019 leadership election joined Mr Williamson in being axed — Robert Buckland from Justice, Robert Jenrick from Housing and Amanda Milling as Tory Party boss.

Renowned reformer Michael Gove has been tasked with fixing Britain’s housing woes as well as handling demands for a another Scottish independence referendum.

After weeks of speculation about a reshuffle, Downing Street hailed a new look team to fix Britain from the devastation of the pandemic and wrestle day-to-day politics back on to Mr Johnson’s winning agenda from two years ago.

Last night he said: “The Cabinet I have appointed will work tirelessly to unite and level up the whole country. We will build back better from the pandemic and deliver on your priorities.”

But the PM’s big day hit an early wobble after terse talks with Mr Raab over his demotion.

Mr Raab had been heavily criticised for being on holiday as the Taliban swept across Afghanistan.

While the blow was sweetened with a symbolic title of Deputy PM, allies say he was aggrieved at being blamed over the Kabul extraction and “got a lot off his chest” during a lengthy one-on-one.

Red-waller Simon Clarke — who resigned earlier this year as a junior minister after falling for a young aide — returned as Chief Secretary to the Treasury.

But the biggest promotion of the day was for trade deal queen Ms Truss, who became Britain’s top diplomat and only the second female Foreign Secretary.

She had been the butt of Westminster jokes for years over her strange speeches about cheese and over-enthusiastic use of Instagram — and had been widely tipped for the axe a year or so ago.

But her success signing up Britain to a slew of rollover trade deals after Brexit and a landmark new free trade accord with Australia made her an instant Boris favourite.

As the longest continuously serving Cabinet minister for seven years, she now holds a Great Office of State and is the clearest female leadership contender to one day replace Mr Johnson.

On the flip side, the biggest casualty of the day was sacked Education Secretary Mr Williamson.

He got the boot after a string of fiascos while in charge of Britain’s schools, including closing them for the first time in modern history and delays getting pupils back.

He also oversaw the exams fiasco and got sucked into an ill-fated war with footballer Marcus Rashford over free school meals.

Teaching unions delighted in his demise, but Downing Street said he had “played a key role” and that Mr Johnson was “grateful for his loyalty and service.”

He is the latest ethnic minority Tory put into a top position in Boris Johnson’s cabinet.

Mr Zahawi, born in Baghdad, fled Iraq with his parents during Saddham Hussein’s early years of terror in the mid 1970s.

He could barely speak English when he arrived and will now make sure millions of kids catch-up on missed learning from Covid.

National Education Union’s General Secretary Dr Mary Bousted said: “The reports are that he’s competent and I hope he is.

“I don’t expect we will always agree, but we can expect decisions made on better evidence.”

He has had a few junior posts, including one in education.

Michael Gove has been put in charge of the Government’s levelling up agenda — and will reform crumbling planning laws as Housing Secretary.[/caption]

FORMER I’m A Celeb Star and best-selling author Nadine Dorries was promoted to Culture Secretary in the reshuffle.

The daughter of a bus driver brought up on a council estate in Liverpool, she is not afraid to ruffle Tory feathers.

She once memorably branded David Cameron and George Osborne “two posh boys who don’t know the price of milk”.

More recently, she has blasted leftie “snowflakes” and cancel culture in universities.

In a taste of her priorities in her new role, she recently tweeted: “Left-wing snowflakes are killing comedy, tearing down historic statues, removing books from universities, dumbing down panto, removing Christ from Christmas and suppressing free speech.“

Sadly, it must be true, history does repeat itself. It will be music next.”

Ms Dorries is one of Britain’s best-known politicians after she appeared on I’m a Celeb in 2012.

She failed to tell the Tory whips of her stint Down Under and was temporarily suspended from the Conservative Party as punishment.

But her reality debut was short lived as she was the first contestant booted off the show.

The following year, she wrote her first novel, The Four Streets, which draws on her Liverpool Catholic background.

Acid-tonged reviewers panned the book, but Brits catapulted it into the best-seller list.