THIS time last year, New York was about the worst place in America.

As well as being a centre of the coronavirus, it was also an epicentre of the most angry people. Everywhere you went, people barked at you to pull up your mask.

Even people jogging in an empty Central Park were expected to snuffle through one. The feeling in the city was mean, hostile, scared and self-righteous.

But last month the city’s left-wing governor announced the lifting of almost all restrictions.

New Yorkers have been getting their vaccines. Cases have fallen. As I discovered on a recent visit, the city is finally breathing again.

The nightmare finally feels over. And that is because New Yorkers want to get going again.

They know that they, and their city, cannot sit for ever at home, fearing a virus that will not affect the vast majority of them and will affect almost nobody now the vaccines are in place.

What a difference from our country. When Boris Johnson made his announcement on Monday about the lifting of most remaining lockdown conditions, it was greeted with joy by many. But a noisy minority responded, once more, with a whine of protest.

The Duchess of Cambridge was pictured without wearing a mask[/caption]

Labour politicians tried to outflank the PM, as ever, by saying it was too much too fast. Commentators who seem to have become addicted to wearing their masks boasted they weren’t going to remove their apparently cherished face coverings, whatever the Prime Minister said.

Everywhere the impression was given, once again, that Britain has become a nation of lazily contented mice.

Too many people seem to want the last year to go on for ever — and there are a number of reasons.

Some of them have nice pensions or salaries and have found working from the garden for the last year to be enormously restful. It’s the life they always wanted. Why work from an office when you can work from your nice house?

Other people have bought into the worst of the fearmongering of the last year. They believe that if they open their front door they will see the street piled high with bodies. Covid casualties.

Others are just determined to show they are “caring” — or not able to weigh up the evidence — and wear face masks even if everybody in the country is vaccinated.

Frankly, I have had it with these people. Our country cannot remain in some form of lockdown for ever. We cannot live our lives like timid little mice — and for one reason in particular.

Most people do not have the luxury of a silver-plated pension, a fully-paid mortgage and nice garden, or a job that allows them to work from home on a full salary.

Most people, especially young people, need to get back to a normal life — and the vaccine is the way to do that.

We have a choice over taking the vaccine, and those people who haven’t taken it have taken the risk upon themselves and can deal with whatever consequences that means.

But our country, especially our economy, cannot cope with this endless fearfulness. This endless timidity.

Currently, we have a media scouring the land to find fully vaccinated people, like the Duchess of Cambridge, not wearing a mask for a nanosecond.

So what? Have we become a nation of informers and tell-tales as well as a nation of mice?

The Prime Minister was given four options for what to do later this month.

One of them was effectively to reimpose lockdown until nobody in Britain catches or dies from the coronavirus. The other options weren’t much better.

He chose the right one, to let the country get going again. And from then on it is going to be up to us.

But I cannot understand the mewling and the moaning from mask addicts and others.

One of the biggest looming problems in our country is the difficulty that young people have accumulating capital. Let alone trying to leap on to the property ladder. 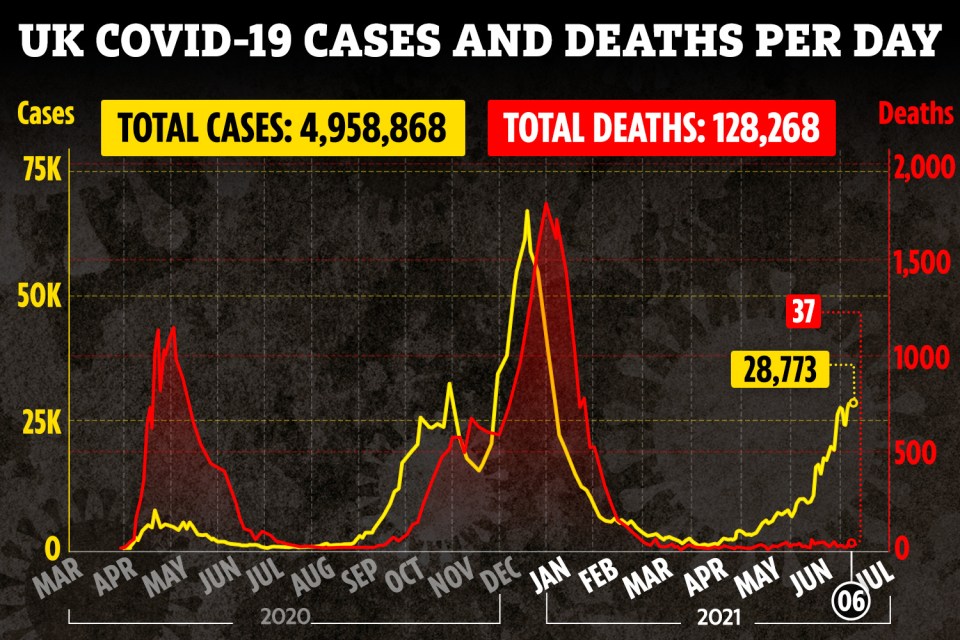 It is a nightmare. One that every-one who isn’t young vastly downplays.

What we have done to young people over the last year is terrible. It cannot continue because some people of an older generation seem to never want to come out of lockdown.

The rest of the world is reopening. China — which gave us this virus — is more than up and running again. America, too, is opening up and beginning to roar. New York doesn’t want to be held down and it won’t be.

So what do we want to do, Britain? Do we want to get going and start competing with the rest of the world again?

Or do we want to pretend the current state of affairs can go on for ever? Because while people may think it can, it can’t.

The PM is right to give us a shove, not just out of our front doors, but back into the real world.

Green tosh is an eco circus

One of the most touching things about the green extremists is their belief that the rest of the world is just waiting to follow Britain.

Whenever the likes of Extinction Rebellion try to make any sense, they always say Britain must “lead by example”.

They leave you with the impression that China, India and the rest of the world sit, puppy-like, waiting to watch what Britain is doing and then follow.

The British Government also hangs on to this belief.

Whenever you ask why they are going all the way with some barmy green idea, the “leading by example” line comes up.

As it happens, on this as with so many other matters, the world is not waiting for our lead.

Yet still our Government goes through the costly circus. Like shutting down our remaining coal-fired power stations.

Or trying to phase out gas boilers in homes.

That includes trying to ban them in new homes from 2025, pushing us to replace existing heaters and banning their sale completely from the mid-2030s.

It is still unclear that the new technologies to replace them will work.

Or that we will not be put through endless blackouts and brownouts in the years ahead.

So it is worth looking at the rest of the world.

The UK currently accounts for less than one per cent of global CO2 emissions.

And while we are shutting down our energy supplies, the rest of the world is going the other way.

China is planning hundreds of new coal-powered power stations. India is planning almost 100. Same with Indonesia and other countries.

Of course, they all pretend to be meeting carbon commitments. But they think their energy supply matters more.

Of course, we should do what we can to protect the planet. If it works. But we should stop fooling ourselves that the world is watching.

A new poll once again reveals the blindingly obvious.

The work of American super-pollster Frank Luntz reveals that young people are the most intolerant generation yet.

Over half of young people between the ages of 18 and 29 have cancelled a friendship because of a friend’s views, while 22 per cent stopped talking to someone over something political they said.

And 22 per cent described shunning people over their political views.

To be clear, the views they shut people out for will be the usual ones.

Support for Brexit. Saying anything sensible that the majority of people would also say. Not signing up to all of the latest woke dogmas.

We used to describe young people as “open-minded”.

That was a hangover from the 1960s when we just assumed young people, before they started families, would be open to new ideas, experimenting and more.

But that is exactly wrong when it comes to Generation Woke.

Generation Woke is the most closed-minded generation since the Puritans.

They don’t debate because they know they are right.

They won’t speak to people who disagree with them because they know those people are wrong.

They won’t listen because they don’t think they need to learn anything. Will they grow up?

Perhaps. If not, we should be afraid. Very afraid.

The exciting announcement is here, revealing what is going to stand on the fourth plinth in Trafalgar Square for the next few years.

Once again a committee of dunderheads has chosen the worst ideas submitted by the least talented artists. All paid for by City Hall.

The fourth plinth in Trafalgar Square[/caption]

The winners this time include a sculpture consisting of the faces of 850 transgender people.

Also a sculpture of a man from Malawi who once told his followers to slaughter all the white people in his area and preached with the severed head of one of his victims beside him.

Another great diversity pick. Personally, I can’t now remember a time when the fourth plinth wasn’t filled with similar rubbish.

And it is a shame.

Because Trafalgar Square is one of our great public spaces and should be made better, not worse, by whatever goes on the plinth.

Of course, the committees who decide these things always want “relevancy”. So I’ve got an idea for City Hall.

Britain will not be back to normal until next SPRING, Prof Chris Whitty warns

Why don’t we have a sculpture to commemorate the 23 children aged 17 or younger in London who were murdered with knives between 2019 and 2020?

If City Hall wants relevant, I can give them relevant.