MATT Hancock told his wife he was leaving her on the night his affair with an aide was revealed, it was reported.

In his resignation statement, the former Health Secretary said he needed to spend more time with his children but pointedly didn’t contain an apology to his wife.

Hancock quit in the wake of mounting pressure from colleagues within the Conservative party over the shocking footage of him kissing Gina Coladangelo.

He finally caved in to pressure, admitting he had “let down” the millions who had made sacrifices during the pandemic.

In a resignation letter to the Prime Minister he said: “I want to reiterate my apology for breaking the guidance, and apologise to my family and loved ones for putting them through this.

“I also need to be with my children at this time.”

But the statement had no mention of wife, Martha , who has been married to the Health Secretary for 15 years,

According to The Sunday Times, she had no idea her husband was having an affair until he broke the news and announced that their marriage was over.

Martha Hancock seen out walking this morning after yesterday’s explosive news and still had her wedding ring on.

Martha, mum-of-three, wore a floral dress and dark sunglasses as she gave a saddened half-smile to onlookers.

And a bunch of pink peonies in a glass vase were placed on the front doorstep of her home by a florist delivery man – who arrived just after 10am.

He said Mr Hancock “should leave office very proud of what you have achieved – not just in tackling the pandemic, but even before Covid-19 struck us”.

Mr Johnson added: “I am grateful for your support and believe that your contribution to public service is far from over.”

Tonight Labour leader Keir Starmer said: “Matt Hancock is right to resign. But Boris Johnson should have sacked him.”

CCTV images showed him passionately kissing his aide – with the dad-of-three shamelessly asking for “privacy on this personal matter” just hours later.

And he admitted he had “broken social distancing rules” after lecturing the country on coronavirus regulations throughout the pandemic.

He was recorded kissing her on May 6 – while hugging was still banned. 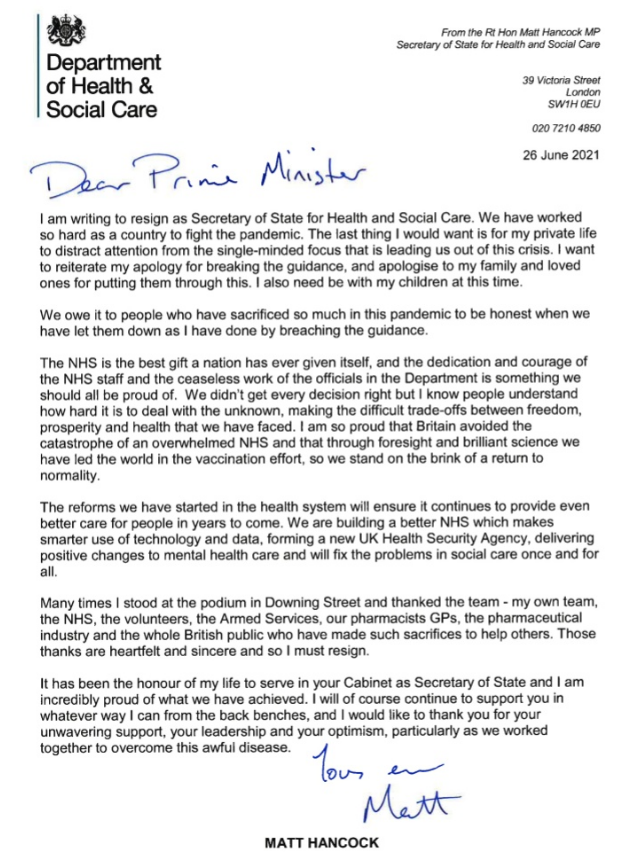 Just ten days later, the hypocritical politician warned the country we mustn’t cuddle our loved ones.

Ms Coladangelo, who has been a close friend of the former cabinet minister since their time at university, was appointed as a non-executive director at the Department of Health and Social Care last year.

Ms Coladangelo, who is listed on the department’s website as a non-executive director, is the marketing and communications director at British retailer Oliver Bonas, which was founded by her husband Oliver Tress.

Her LinkedIn profile says she has been working as a non-executive director at the Department of Health since September 2020 and was at Oxford University at the same time as the health secretary.

MP Duncan Baker, who represents North Norfolk, became the first serving Conservative to openly call for him to go.

I am writing to resign as Secretary of State for Health and Social Care. We have worked so hard as a country to fight the pandemic. The last thing I would want is for my private life to distract attention from the single-minded focus that is leading us out of this crisis.

I want to reiterate my apology for breaking the guidance, and apologise to my family and loved ones for putting them through this. I also need to be with my children at this time.

We owe it to people who have sacrificed so much in this pandemic to be honest when we have let them down as I have done by breaching the guidance.

The NHS is the best gift a nation has ever given itself, and the dedication and courage of the NHS staff and the ceaseless work of the officials in the Department is something we should all be proud of.

We didn’t get every decision right but I know people understand how hard it is to deal with the unknown, making the difficult trade-offs between freedom, prosperity and health that we have faced.

I am so proud that Britain avoided the catastrophe of an overwhelmed NHS and that through foresight and brilliant science we have led the world in the vaccination effort, so we stand on the brink of a return to normality.

The reforms we have started in the health system will ensure it continues to provide even better care for people in years to come.

We are building a better NHS which makes smarter use of technology and data, forming a new UK Health Security Agency, delivering positive changes to mental health care and will fix the problems in social care once and for all.

Many times I stood at the podium in Downing Street and thanked the team – my own team, the NHS, the volunteers, the Armed Services, our pharmacists, GPs, the pharmaceutical industry and the whole British publish who have made such sacrifices to help others. Those thanks are heartfelt and sincere so I must resign.

It has been the honour of my life to serve in your Cabinet as Secretary of State and I am incredibly proud of what we have achieved.

I will of course continue to support you in whatever way I can from the back benches, and I would like to thank you for your unwavering support, your leadership and your optimism, particularly as we worked together to overcome this awful disease.

He said: “In my view, people in high public office and great positions of responsibility should act with the appropriate morals and ethics that come with that role.

“Matt Hancock – on a number of measures – has fallen short of that.”

Then Work and Pensions Secretary and Tory MP for Tatton Esther McVey has urged Mr Hancock to step down.

She said: “If it had been me, I would have resigned myself.”

This morning, Mr Hancock faced fresh embarrassment when an ally booked in to defend him on the radio failed to turn up.

The unnamed supporter was due to be interviewed this morning on BBC Radio 4’s Today programme – but presenters Mishal Husain and Martha Kearney were forced to explain that he’s “not been answering his phone”.

The pair told listeners: “We had been expecting to speak to a supporter of Matt Hancock this morning but he’s not been answering his phone. We will keep trying.”

The MP for Christchurch told BBC Radio 4’s PM programme that the AGM of his local party association had “unanimously called on Matt Hancock to resign immediately”.

“And they’re absolutely seething now, that having made sacrifices themselves, including not seeing loved ones and all the rest of it, they find that the person who was in charge of all this feels free to not comply with his own regulations and I think that’s the essence of it really.”

Gina Coladangelo to step down from £15,000 post as Matt Hancock leaves wife

He added: “I agree with that. I think that his position is untenable. For that reason, the sooner he does the honourable thing and announces his resignation, the better – because otherwise it is not going to go away.

Some Tory MPs have leapt to Mr Hancock’s defence – and last night, Housing Secretary Robert Jenrick told the BBC: “There’s a task to be done, Matt is on the job doing that, and I think we should allow him to get on with the job.”

And he claimed that “the rules have been hard” – news that won’t come as a surprise to the millions of Brits who have complied faultlessly since coronavirus took hold.