THE EU’s vaccine tsar has claimed millions of AstraZeneca Covid jabs will now be kept within Europe and not sent to Britain.

Thierry Breton said the pharmaceutical giant told him all but a fraction of doses produced at a Dutch plant would be delivered to EU member states.

And in an interview on Friday, he said “zero” doses made in the EU would now be sanctioned for delivery to the UK until AZ fulfilled its contract with the bloc, reports the Independent.

The Dutch factory, where the Anglo-Swedish firm’s subcontractor, Halix, makes the much-needed vaccine, produces around 7.5 million doses of the jab a month.

Whitehall officials had proposed a 50/50 split but Breton said Pascal Soriot, AZ’s French-born chief exec, had recognised that all but one batch of the jabs would go to EU residents.

The stockpile at the plant in Leiden, in south Holland, had been seen in Whitehall as a key part in making up a shortfall in vaccine production in the UK.

“The CEO of AstraZeneca told us that, in fact, since February all the production of Halix has been planned to be delivered to Europe except, he said, one batch, to be very precise.

“AstraZeneca has a commitment: they have committed 70 million in quarter two [of the financial year] and I know that 70 million is AstraZeneca’s production, more or less, of Halix and Seneffe [a plant in Belgium],” he added.

“This is why I think that they will deliver this commitment, but I just remind you that at the beginning the contract was 180 million, so they reduced drastically what they could do.”

The UK invested £21million into the Halix factory in Leiden, in the Netherlands[/caption] The Dutch factory produces around 7.5 million doses of the jab a month[/caption]

Breton – a former French finance minister – said after a slow start, a rapid increase in European production was now allowing EU nations to speed up their vaccination programmes.

Comparing the EU and UK programmes to the fable of “the tortoise and the hare” he boasted European programmes were now quickly catching up.

However, EU nations have so far administered only around 19 jabs per 100 people, compared to 55 out of 100 in the UK.

Breton then hinted the UK’s policy of leaving three months between the first and second doses of vaccine was the reason why it had pulled ahead in terms of early jabs.

However, he believes the UK may struggle to match the EU when it comes down to providing the full protection of two jabs.

“The British policy of prioritising first doses was completely understandable, but it means it now has to find second doses, and in a hurry,” he said.

“I don’t want to make anyone anxious, we will of course do all we can to meet their needs, but we also have certain constraints in Europe.”

The AZ plants have been at the centre of a “vaccine war” between London and Brussels, with the UK insisting it has first claim on vaccine production under the terms of contracts signed last year.

Last week, it was revealed the UK pumped £21mMILLION into a Dutch AstraZeneca vaccine factory during the vaccine war as the Netherlands refused to invest. 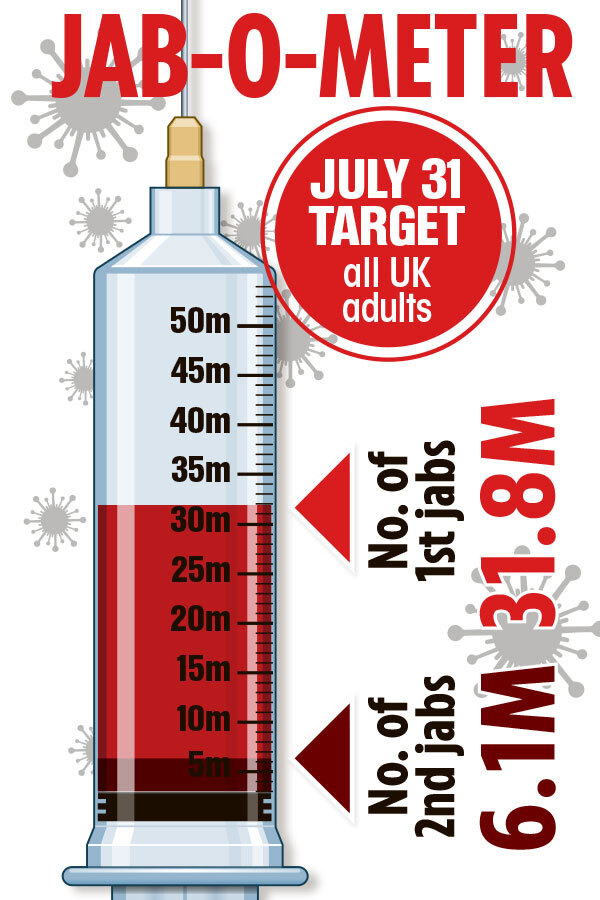 Dutch Prime Minister Mark Rutte turned down a plea from Oxford University for £8.5m in funding to boost production of the AZ jab on the continent.

The jabs blockade on Britain by the EU has been fatally undermined by the revelations that their own side refused to invest in the Halix factory in Leiden.

When the request was made, at the start of the pandemic in April last year, the UK had already pumped more than £21m into the plant.

Matt Hancock approved the multi-million pound investment with the guarantee that doses made at the factor would be sent to the UK.

The Sun Online has reached out to AstraZeneca for response to Breton’s comments but when contacted by the Irish Times it reportedly refused to comment.

William pulls out of Bafta speech tonight after death of grandfather

Queen has been 'amazing', tearful Sophie reveals after visiting monarch

A UK government spokesman said: “Producing vaccines is an international endeavour and the UK is proud to be playing a leading role in the global effort to develop and distribute the coronavirus vaccine.

“We are continuing to make exceptional progress through the rollout of our vaccination programme and remain confident in our supplies.

“The details of any commercial vaccine supply agreements between national governments and AstraZeneca are commercially sensitive and a matter for those two parties.”