FRANCE, Italy and Germany have resumed the rollout out of the AstraZeneca vaccine after the EU finally declared it safe.

The humiliating U-turn came after all three countries led the way in suspending use of the jab amid an unfounded safety scare about the link with blood-clots.

A man getting the AstraZeneca jab in Italy, one of the countries to resume the roll out[/caption] 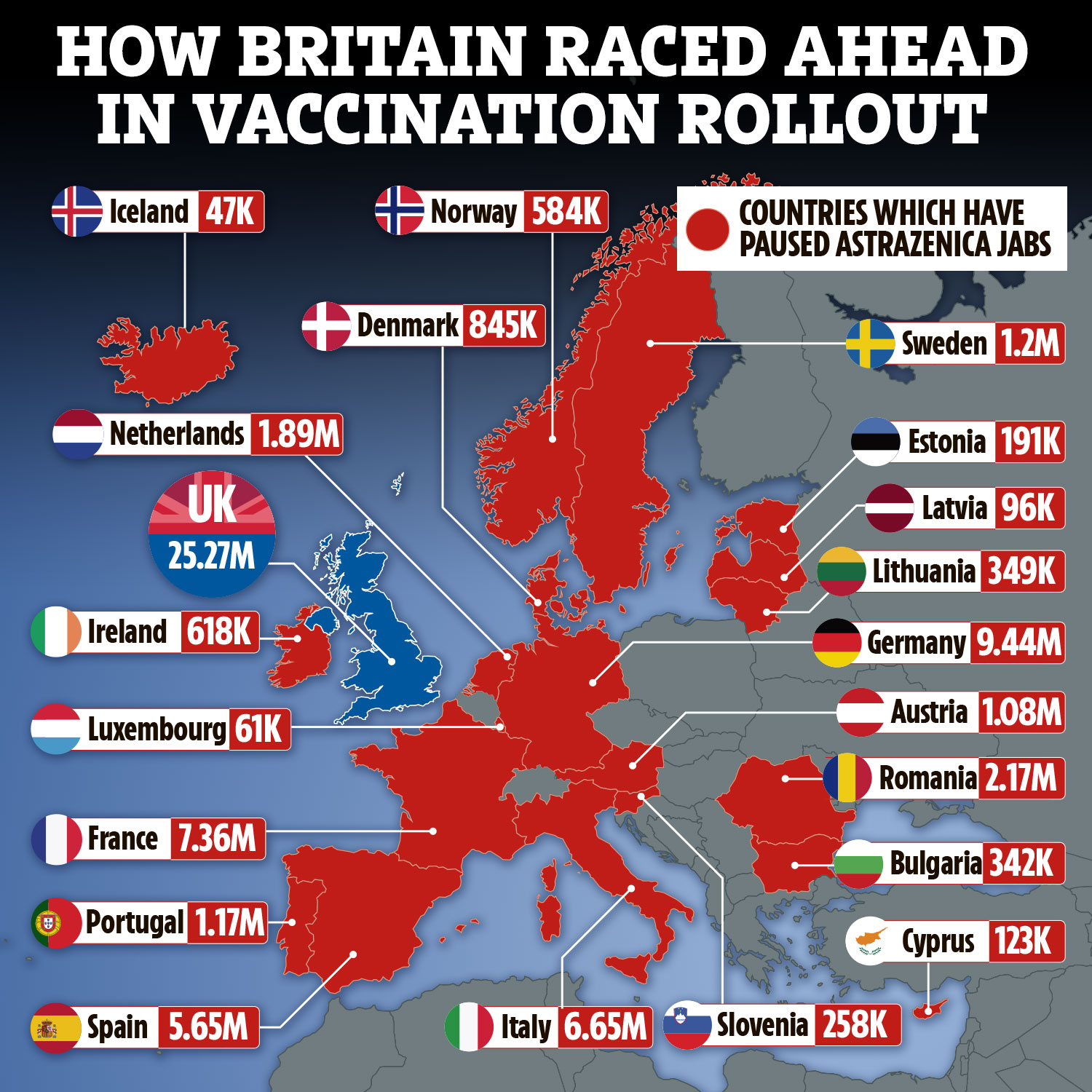 The EU’s regulator has now said the Oxford jab is “safe and effective” marking the end days of dithering.

More than a dozen EU nations had halted its use over unsubstantiated fears it may trigger blood clots after what leaders admitted was a political decision.

Within minutes of regulator EMA’s announcement Italy became the first state to say it will resume use of the jab from today.

Matteo Salvini, leader of Italy’s biggest party Lega, said heads should roll over the fiasco and urged “full steam ahead” on deploying the AstraZeneca shot.

He fumed: “Further mistakes by Brussels are not tolerable. We’re awaiting the firing of all those who got things wrong.”

In France, a government spokesman said there is now no reason for the country not to use the AstraZeneca jab.

France is due to resume use of the vaccine today with Prime Minister Jean Castex is due to get the jab.

Castex announced a new month-long lockdown for Paris and other parts of the country on Thursday, after a faltering vaccine rollout and the spread of highly contagious coronavirus variants.

Germany’s largest state Rhineland-Palatinate, with a population of four million, became the first reintroduce it.

Authorities in Berlin said two large vaccination centers that offer the AstraZeneca shot to people in the German capital will reopen Friday.

A stark picture of an empty vaccination centre this week showed the extent to which the decision to suspend use of the AstraZeneca jab was taking on the country’s stuttering vaccine roll-out.

Latvia, Lithuania, Cyprus, Luxembourg and Slovenia are also due to resume use of the vaccine today.

Other EU countries have been critical of Brussel’s handling of the AstraZeneca safety scare.

He said they were down to “panic in the EU that is not based on any research or scientific recommendations but based on political decisions”.

Greece’s PM said he “didn’t understand” why some countries blocked the shot’s use and that there was “no confusion whatsoever” about its safety.

Brussels’ handling of the vaccine rollout has widely been seen as fiasco, with the rollout lagging far behind the UK, as a third wave hits many nations.

Yet, despite countries questioning whether it is safe, Brussels is threatening to hoard millions more doses.

But Europe is also deeply divided over Ursula von der Leyen’s threat to ban exports of vaccines to Britain.

She has complained complained the EU is exporting millions of jabs to the UK but receiving none in return.

Germany, Italy, France and Denmark have all backed Brussels boss’ plan to stop shipments to countries with successful jabs rollouts.

But the Netherlands, Belgium, Ireland, Poland, and Sweden are all sceptical and fear tit-for-tat measures will hit European supply chains.

Some of the key raw materials used to make the Pfizer factory on the continent come from Britain.

The EU boss hasn’t ruled out rule out blocking deliveries of Pfizer to Britain if we don’t.

Asked abut that threat her spokesman said: “Nothing is off the table, everything is possible.”

The panic over blood clots is just the latest block on EU residents getting their jabs – following problems over supply, lack of trust in the vaccines, and a chaotic rollout.

It comes as Emer Cooke, the EMA’s executive director, said she would take the Covid vaccine “tomorrow” if offered – after debating on its safety for days.

Mrs Cooke added: “We are very much aware that some member states have paused vaccinations, waiting for EMA’s outcome of a review.

“Given that thousands of people in the EU die every day – in fact over 2,500 were reported one day last week – it really was crucial for EMA to review rapidly and thoroughly all the available evidence, so we made this review our highest priority.”

“We are delivering on that promise today and our responsibility is to come to a conclusion as to whether the benefits outweigh the risks of the vaccines so that countries can make an uniformed decision and increase trust int eh vaccine.”

She said the EMA recommends the jab for use – but a link between a small number of “blood clotting disorders” and the vaccine can’t be entirely ruled out, so it must be added to warning labels.

Although some EU countries have reversed the jab suspension, Sweden has vowed to keep its ban in place until next week. 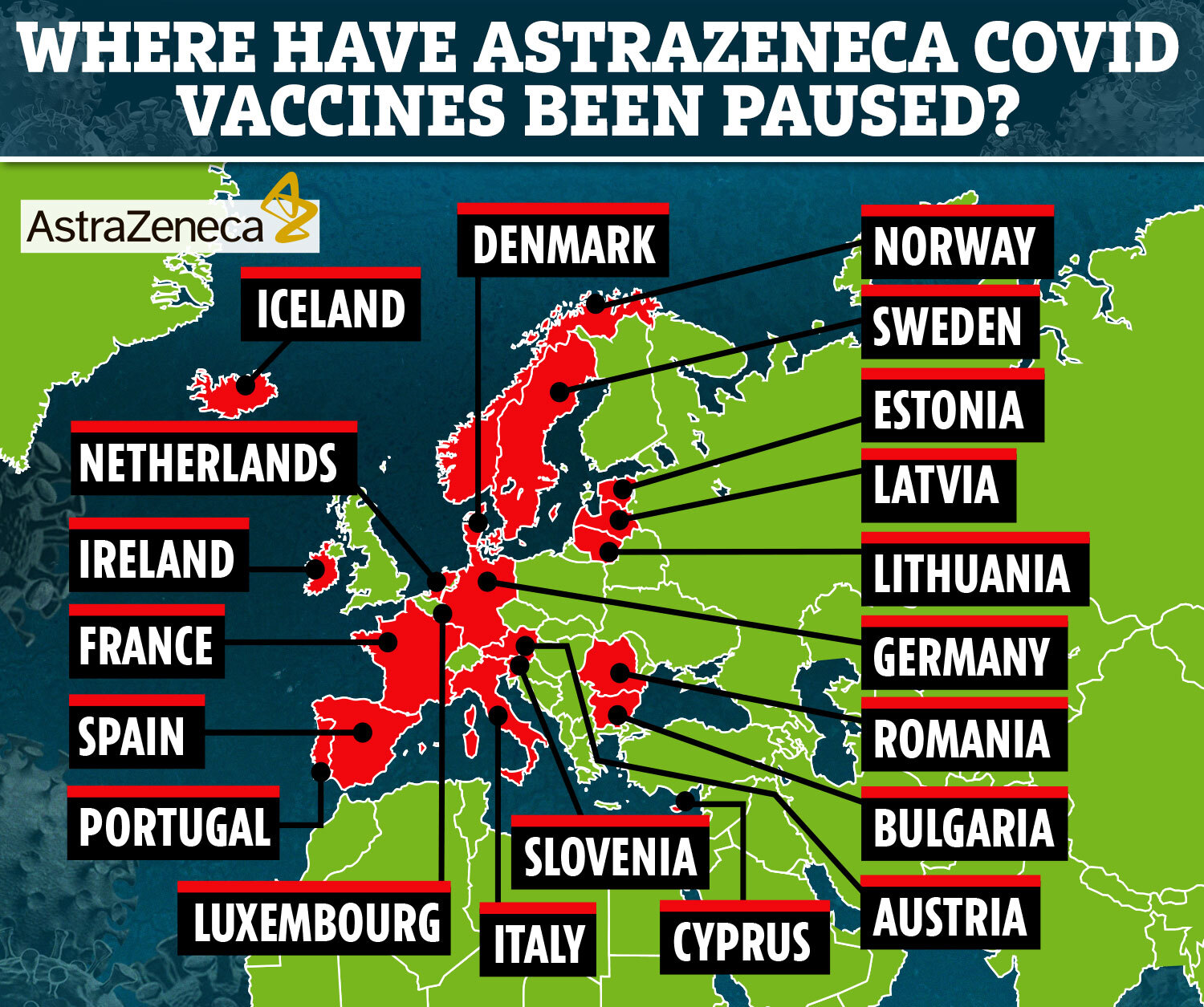 “The Public Health Agency needs a few days to analyse the situation and how the AstraZeneca vaccine can be used in Sweden,” Johan Carlson told reporters.

“Next week we will say the position we are taking on the use of the AstraZeneca vaccine.”

Medical bosses still don’t know why the blood clots occurred in these cases, but said thousands develop for a range of reasons every month in the EU.

The patients in this case may have even developed clots due to Covid itself, they think.

Mrs Cooke added while they believe the vaccine is safe, people who are jabbed should be aware of possible side effects to “look out for just incase they have any problems”.

Dr Sabine Strauss, an EMA board member, added the group is also probing a possible link between the Pill and clots, after the regulator found a higher risk of thrombotic incidents among women.

But they are also investigating the risk of smoking and a number of other links. 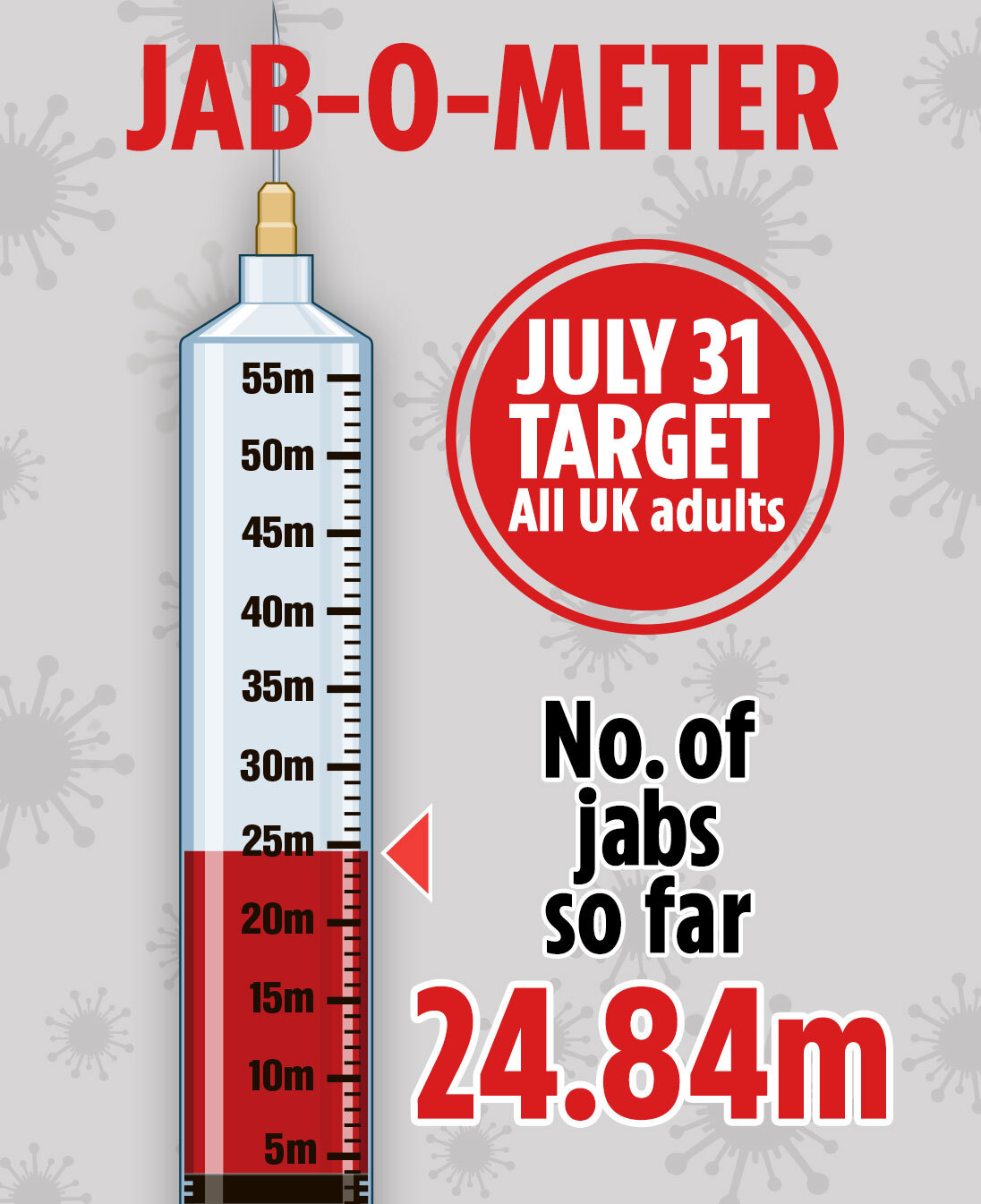 The UK regulator, the MHRA, released a fresh statement on the issue today with the World Health Organisation set to follow suit tomorrow.

Professor Sir Munir Pirmohamed, chairman of the Commission on Human Medicines, said: “We will still recommend that the vaccine is taken when you’re offered the vaccine.”

The MHRA said the UK had five reports of a specific brain blood clot in people who had had the AstraZeneca coronavirus vaccine, though no causal link has been made with the jab, the medicines regulator has said.

Its benefits in protecting people from Covid-19, with the associated risks of death and hospitalisation, outweigh the possible risks.

They were men aged 19 to 59 who experienced a clot together with low blood platelet count. One of the five has since died.

It said the cases represented a less than one in a million chance of suffering this type of clot, while the risk of dying from Covid aged 40 to 49 was one in 1,000.

Dr Hans Kluge, WHO regional director for Europe, said that the benefits of the AstraZeneca vaccine “far outweigh its risk” and its use “should continue to save lives”.

He added: “At this point in time, the benefits of the AstraZeneca vaccine far outweigh its risk and its use should continue to save lives.”

Scientists rushed to reassure people that the Oxford/AstraZeneca vaccine is safe after 20 EU countries, including France, Germany and Spain, suspended its use over unproven concerns about blood clots.

Cases are now on the rise across Europe with Poland and Bulgaria the latest nations to announce further lockdown measures.

Professor Jonathan Van-Tam said that “vaccines don’t save lives if they’re in fridges” as he sought to reassure the public after a dozen European countries suspended the vaccine over isolated cases of blood clotting.

The move would delay Britain’s jabs roll-out, as many of our supplies come from factories on the continent.

A No10 spokesman said restrictions on vaccine supply would “endanger global efforts to fight the virus”.

Police give gran, 82, warning for cuppa with neighbour in communal garden

Schoolgirl, 11, missing in west London as cops launch appeal to find her

It comes as a new study suggests the vaccines from Oxford/AstraZeneca and Pfizer/BioNTech may be more effective against the P1 Brazil variant of coronavirus than previously thought.

Research from Oxford University, which has not yet been peer-reviewed, measured the level of antibodies that can neutralise – or stop infection from – variants that are circulating in South Africa, Brazil and elsewhere.

It found that vaccines do not work as well against the variants as against the original strain of coronavirus, but that the P1 Brazilian variant may be less resistant to vaccine-induced antibodies than first feared. 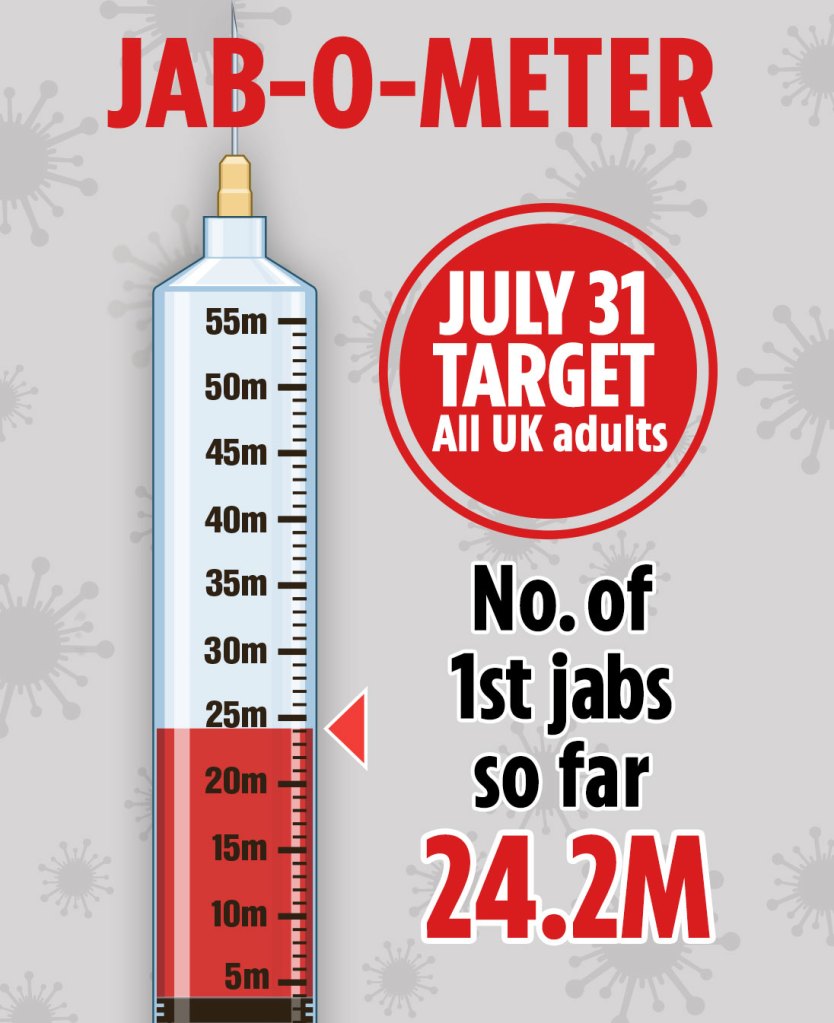 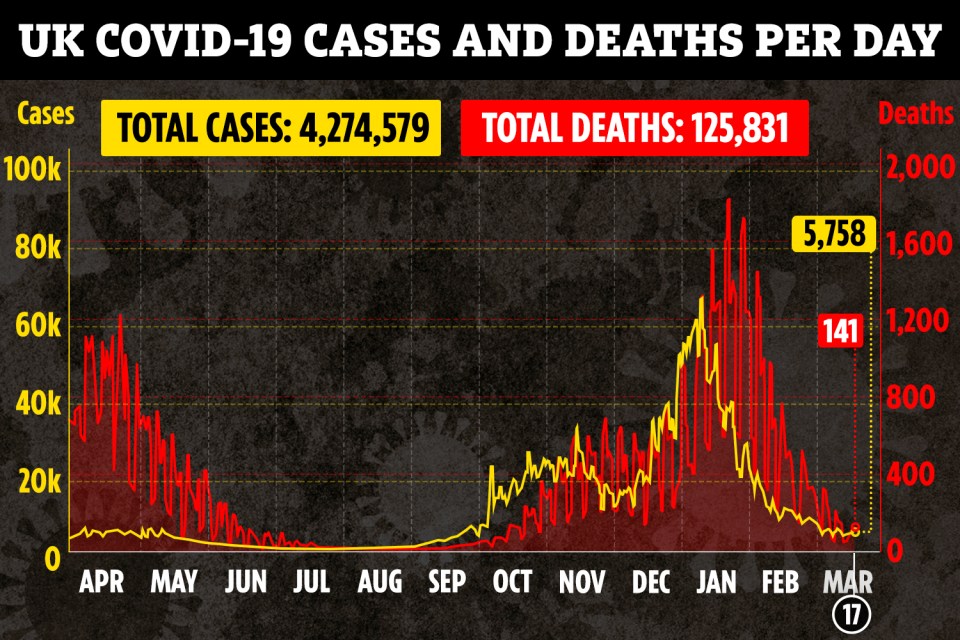