RUSSIA has warned the Britain that weapons supplied to Ukraine will be a “legitimate targets”.

It comes as a Russian helicopter has been blasted out of the sky by Ukrainian forces using a British missile for the first time.

The threat has come from the country’s UK ambassador who has also accused Britain of escalating the war by supplying Kyiv with weapons.

The UK has already sent thousands of anti-tank missiles to Ukraine and Defence Secretary Ben Wallace has agreed to send more after a conference held by military donors to the country.

“They exacerbate the situation, making it even bloodier. Apparently, those are new, high-precision weapons.

Russian troops 'DIES from radiation poisoning after camping at Chernobyl'

“Naturally, our armed forces will view them as a legitimate target if those supplies get through the Ukrainian border.”

The conference of 35 nations helping Ukraine was hosted by Mr Wallace who said “more lethal aid” would go to the country.

He said the Ukrainians will be getting longer range artillery and the countries also agreed to supply anti-ship missiles.

But the ambassador said “wrong decisions of this kind are very dangerous, because they are aimed at fuelling the conflict”.

“They reveal the desire to do us as much harm as possible,” he added.

He went on to claim that supplying more weapon will serve to fuel the idea “that there’s no need for negotiations at this point”.

“This is the position of an ostrich, an attempt to hide your head in sand in a fit of powerlessness and blind rage,” he said.

Dramatic footage shows the moment the Mi-28N is hit by the Starstreak in the Luhansk region of eastern Ukraine.

The Starstreak is the world’s fastest surface-to-air missile and can travel at three time the speed of sound.

Ministry of Defence sources said it’s the first time the missile has been used to bring down a Russian plane.

In the video, the chopper can be seen skimming the treetops before it’s hit in the tail by the Starstreak.

The missile can be seen lifting off through the trees towards its target.

Other footage shows the aircraft wreckage strewn across a road as it’s inspected by Ukrainian troops.

The two crew on board the helicopter were reported to have survived being shot down though it’s unclear if they were captured by the Ukrainians.

Defence sources who examined the video of the Russian helicopter coming down reportedly believe it was as a result of a Starstreak. 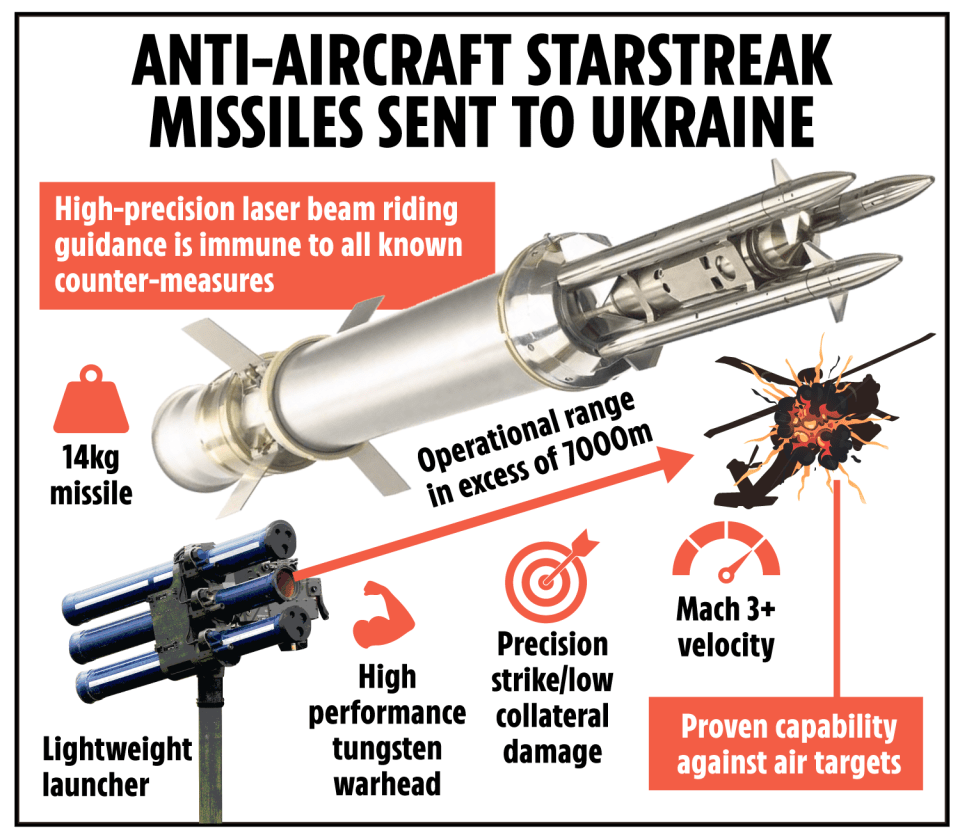 Britain announced on March 9 that it was supplying the high velocity portable missiles to the Ukrainians.

The Belfast-made missiles can be shoulder-mounted or attached to a vehicle and each missile one splits into three darts to puncture armour before warheads detonate.

The Starstreak is not a “fire and forget” system like other anti-aircraft missiles.

The darts are guided to targets by an operator on the ground but this making it difficult for the enemy to deploy counter measures.

Ukrainian troops have been training with Britain’s best Starstreak operators at a secret location in a neighbouring country.

The intensive training was aimed at getting them ready to use the missiles in combat with a two to three weeks intensive course.

Mr Wallace has previously said the Starstreak system was ready to be used imminently.

Britain recently said it would ship another 6,000 anti-tank missiles and explosive weapons to Ukraine to help “keep the flame of freedom alive”.

The latest shipment of weapons means Britain has more than doubled its total sent there to 10,000 just days after Ukraine warned it was fast running out.

The UK has already given 4,000 anti-tank artillery — including Next-Generation Light Anti-Tank Weapons Systems, or NLAWs, and Javelin missiles.

at April 02, 2022
Email ThisBlogThis!Share to TwitterShare to FacebookShare to Pinterest
Labels: BBC News