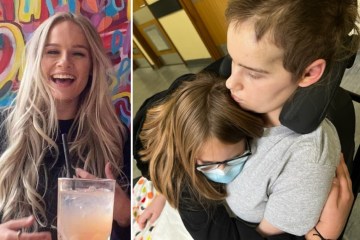 HOLLY Willoughby has gushed over her “hubby” Dan Baldwin in a throwback picture showing her spouse with her co-star.

The This Morning anchor, 41, re-posted a snap shared by her ITV presenter Dermot O’Leary, which showed the pair larking around on a boat.

Dermot could be seen in a pair of sunglasses and tackling a bloodied gash on his hand.

Meanwhile for Ministry Of Mayhem producer Dan, 47, who married Holly in 2007, was having a whale of a time.

He could be seen giggling as he posed topless while standing by his mate, enjoying the banter.

After spotting the image on Dermot’s page, Holly re-posted the snap to her Instagram Stories with the sweet caption: “Hey hubby!!”

Holly Willoughby shouts 'Willy' during game of Blockbusters on This Morning

Dermot, who fronts Friday’s episode of This Morning with Alison Hammond, uploaded the picture as part of a series of trips down memory lane.

In his caption, he wrote: “It’s 90s Day on @bbcradio2 – Join me from 8pm tonight for an A-Z of the 90s to celebrate the launch of my brand new “Alternative Sounds of the 90s” show on @bbcsounds.

“In honour of that wonderful decade…this is me looking damn hunky.”

One fan quickly wrote: “This is too much ” as a second quizzed: “Is that Holly’s husband on photo 2?”

Most read in Celebrity

PUT A RING ON IT

A third then wrote: “Hot then. Even hotter now

Meanwhile, lovebirds Holly and Dan met while working together on kids show Ministry of Mayhem.

Holly got her big break in TV when she landed a role fronting the show with Stephen Mulhern in 2004.

Dan was one of the producers on the series, and they went on to marry in 2007.

To celebrate their ten year anniversary, the couple jetted off on a romantic holiday together.

Dan and Holly have three children, with Harry, Belle and Chester making up the happy family.

In 2017, the This Morning host hinted that she was open to the idea of having more kids.

After admitting that she “loves being pregnant”, she insisted that giving birth is “amazing” and “empowering.”

Earlier this year, Holly told how the pair had had an “intense friendship” before things turned romantic.

She said: “We met on Saturday mornings when we were doing that [TV] and became really ridiculously close friends.

“It was like this intensity of friendship for about 10-15 weeks. I remember cheersing him with a glass and looking at him and I was like ‘oh my God, I fancy him, I fancy my friend’.

“It took me so by surprise that I thought ‘what’s just happened?’ And then the relationship carried on.

“In hindsight, looking back, I think I was actually falling in love with him.”

In her new book Reflections Holly opens up about home life with Dan – and reveals what they argue about.

She said: “If I’m watching something on TV and my husband suddenly asks, ‘Why are you watching this s***?’, it’ll spark something deep inside and I will get disproportionately angry about it.

“But actually, I’m angry because I subconsciously feel as though someone’s trying to control what I’m doing.

“My husband absolutely isn’t trying to control me, but I’m getting a really strong reaction, so maybe I’m worried about control in my life. Maybe that’s a sign that I still need to address the issue of control.”

Do you have a story for The Sun Showbiz team?

We pay for videos too. Click here to upload yours.

at April 09, 2022
Email ThisBlogThis!Share to TwitterShare to FacebookShare to Pinterest
Labels: BBC News