VLADIMIR Putin is prepared to lose 50,000 troops to capture Ukraine, it was reported.

The Russian tyrant is said to be “furious” that his forces have not been able to subdue the Ukrainians, as he put on a brave face in a triumphant speech praising his “heroic” soldiers.

A burning Russian tank after it was hit by Ukrainian forces[/caption] Vladimir Putin put on a brave face despite Russian setbacks in Ukraine[/caption] Smoke billows from an oil depot in Vasylkiv, around 25m west of Kyiv, after a Russian missile attack[/caption]

Shells rained down across the country following the invasion in the early hours of Thursday – as the battle for the capital, Kyiv, stretched into a fourth day.

The city awoke to more air raid sirens after missile attacks that turned the sky orange during what Ukrainian President Volodymyr Zelenskyy said was a “brutal” night.

And Ukrainian forces are battling the Russian invaders on the streets of Kharkiv, where Kyiv’s forces remain in “full control”, local commanders say.

But with Russian forces faltering, worrying new evidence has emerged about the blood Putin is willing to shed in his quest to conquer Ukraine.

Intelligence chiefs have said he is willing for 50,000 of his troops to be sacrificed in the war, the Mirror reports.

The grim prediction comes as the Russian Ministry of Health is preparing for a massive medical emergency.

Officials are looking for doctors with a number of specialisms from across Russia to come forward, according to ITN.

Medical organisations should be be ready “to be promptly involved in activities aimed at saving lives and preserving the health of people in Russia”, the ministry has urged.

In a speech marking the annual day of Special Operations Forces, Putin put on a brave face.

He said there should be “special gratitude to those heroically carrying out their military duty these days in the course of the special operation to provide assistance to the people’s republics of Donbas”.

The Russian leader was referring to the two Russian-speaking breakaway enclaves in Ukraine he has recognises as independent countries.

In their latest setback for Putin, a convoy of Russian special forces made up of Chechen fighters has been destroyed.

A general leading the troops was killed in the battle, outside Kyiv, as the slow pace of the invasion has left Vladimir Putin furious.

In a major setback for Russian forces, the Chechen special forces column, including 56 tanks, was obliterated near Hostomel, north-east of the city, the Kyiv Independent reports.

The Russian province of Chechnya is led by the brutal Ramzan Kadyrov, 45, a close ally of Vladimir Putin.

The dead included General Magomed Tushaev, commander of the 141st Motorised Regiment of the Chechen National Guard, according to Ukraine’s Interfax Agency.

The Chechen soldiers are known as “hunters” and each of them was reportedly given a pack of cards with senior Ukrainian officials that Moscow wants dead.

The special forces were pictured training in a Ukrainian forest as they took part in Islamic prayer rituals ahead of their deployment to the frontline.

As his forces encounter stiff resistance from Ukrainians defending their homeland, the Kremlin strongman must be “furious” about the lack of progress, a former Nato defence chief has said.

“Putin is furious, he thought that the whole war would be easy and everything would be done in 1-4 days,” tweeted Riho Terras, who is also the former commander of the Estonian armed forces.

He said Ukrainian intelligence believes the Russians don’t have a “tactical plan” to deal with an enemy that is fighting back.

“The Russians are in shock of the fierce resistance they have encountered,” Terras said.

Mr Zelenksyy Russian troops are “attacking everything” – including ambulances – and areas where there are no military bases.

He has also rejected talks in Belarus which he said “could have been possible” if Russia had not attacked Ukraine from the country’s territory. 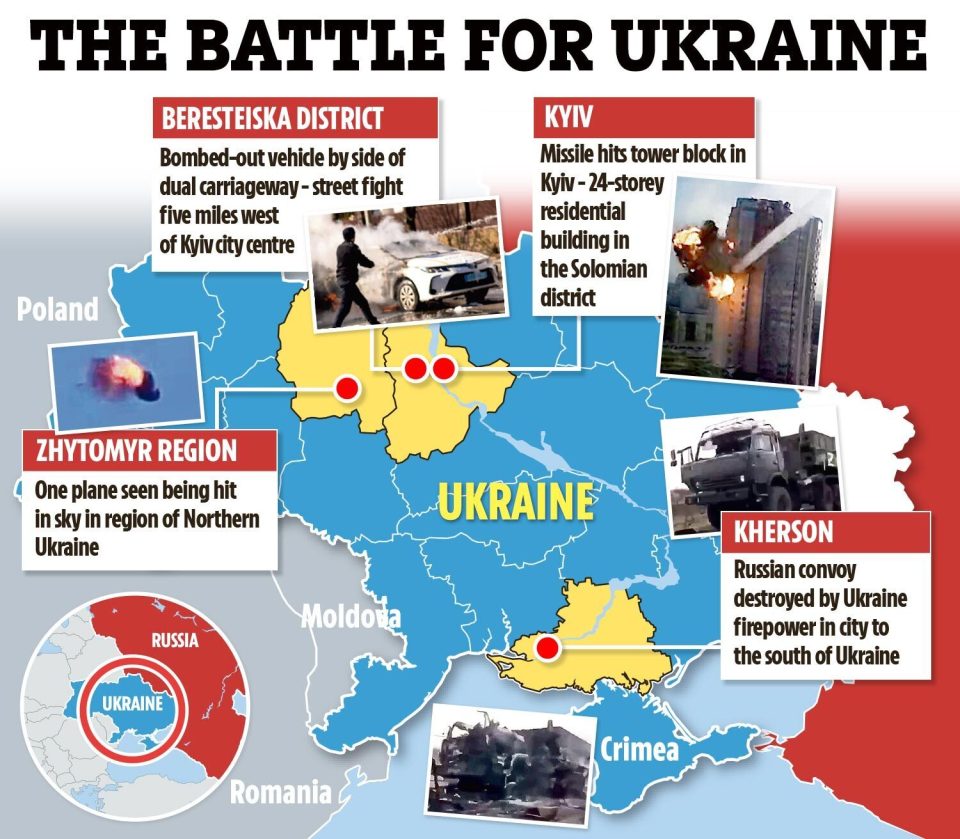 Earlier terrified civilians were urged to take cover in subways and basements as darkness fell.

Missiles kit Kyiv’s main airport, Boryspil International and an oil depot was also blown up at at Vasylkiv, around 25m west of Kyiv.

Residents have been warned the burning depot was emitting smoke and poisonous fumes and were told to keep their windows shut and to take cover.

People were asked not to turn lights on in their homes and keep well away from windows over fears of flying shards of glass.

There were widespread fears that the Russian army would step up its efforts to seize Kyiv this weekend, targeting commercial businesses in a bid to destroy Ukrainians’ morale.

A city-wide curfew is being enforced in the capital while authorities hunt down “sabotage and reconnaissance groups,” Kyiv’s mayor said.

As midnight struck in the war-torn country, civilians and troops were urged to hunker down ahead of the “imminent” attack.

It marks the dawn of a fourth day of fighting as hero Ukranian troops and civilians scramble to beat off the Russian invaders.

MP Lesia Vasylenko tweeted: “In 30-60 mins Kyiv will be under attack never seen before. #Russia will hit us with all they have.”

It comes after a day of fighting during which Russian troops failed to capture the capital.

The official Ukraine death toll stands at 198, including three children.

And at least 17 of those were civilians, killed in a blast.

The Ukrainian Government has insisted the Russians are failing to advance with some 3,500 killed.

The UK Ministry of Defence tweeted in an intelligence update that Russian troops appear to be waning, suffering from “logistical challenges” and a strong, Ukrainian resistance.

The MoD confirmed that Russian troops had been injured and captured by Ukrainian forces.

And Putin has reportedly banned some social media from the country, in a “probable” attempt to hide the horrific details of the Russian invasion from his own people.

Prime ministerial adviser Oleksiy Arestovych said: “We are striking the enemy around Kyiv. The enemy is not moving for now.”

at February 27, 2022
Email ThisBlogThis!Share to TwitterShare to FacebookShare to Pinterest
Labels: BBC News