Europe is ‘on the brink of war’ and Vladimir Putin ‘won’t stop’ after Russian invasion of Ukraine, fears Britain

EUROPE is now “on the brink of a war” with a Russian invasion of Ukraine “imminent and highly likely”, Liz Truss warned today.

The foreign secretary said Britain and the West are “preparing for the worst” but there’s still time for Vladimir Putin to step back.

But she also raised fears he won’t stop at annexing Kyiv and would quickly move onto target other countries in Eastern Europe.

She said we’re in “a very dangerous moment for the world” and an invasion could encourage other hostile states like Iran and China.

Ms Truss vowed a crackdown on Russian oligarchs on London as part of worldwide sanctions that would “cripple” the Russian economy.

She admitted previous attempts to curb the Kremlin’s growing aggression haven’t gone far enough, including those taken by the UK.

The foreign secretary said this morning: “I’m very worried about the situation. We could be on the brink of a war in Europe.

“That would have severe consequences not just for the people of Russia and Ukraine, but also for the broader security of Europe.

“There is still time for Vladimir Putin to step away from the brink. But there is only a limited amount of time for him to do that.”

She added: “President Putin has actively questioned why other countries in Eastern Europe are members of NATO as well.

“So this I fear would not stop at Ukraine. This is an attack on the neighbouring states of Russia and other Eastern European countries.”

'I made a mistake'

Haunting last words of woman, 25, before she died after headache

PE teacher, 22, who 'had sex with pupil in Premier Inn' after prom is struck off

Mystery of Andrew's millionaire lifestyle - despite earning only £270k

She warned in the event of an invasion Kremlin troops could reach the capital Kyiv “very, very quickly” from neighbouring Belarus.

Ms Truss said the city would “certainly” be a high priority target.

And she said Moscow is likely to begin any attack with a “false flag operation” such as a faked attack on Russian separatists.

She said: “There could be false claims that they have been provoked to give a pretext for Russian invasion.

“What we have been doing is we’ve been calling out the Russians, we’ve been exposing their attempts to put a puppet government into Kyiv.

“Over the next few days there could be an attempt to claim the Ukrainians are attacking them, so the Russians have a justification for invading.”

Ms Truss said it’s important the West doesn’t grant any compromises to deter “bullying” by other warmongering states around the world.

She said the message must be “there can be no reward for aggression”, expressing concerns about how Iran and China might react.

There will be nowhere to hide for those oligarchs close to Putin, for companies that back the Russian state.

And she told Germany it would be “simply unconscionable” for gas pipeline Nord Stream 2 to go ahead if there’s an invasion.

The foreign secretary also defended the UK’s response insisting the Government is readying “tougher sanctions than we’ve ever had before”.

She vowed: “There will be nowhere to hide for those oligarchs close to Putin, for companies that back the Russian state.

“It will see a degradation of the Russian economy. I can assure you if Russia invades Ukraine we will be targeting all those organisations.

“We will be extremely tough.”

But she wouldn’t say precisely what punishments will be used or which individuals and companies are set to be targeted.

Russia has now massed such a huge force it can attack Ukraine from all sides starting with a blitz on capital Kyiv, intelligence sources fear.

British and American spooks say the Kremlin is likely to strike without warning and the invasion could start as early as tomorrow.

But a Western intelligence assessment reveaed: “We would expect multiple sequenced attacks and not a single strike.”

It could mean a sudden thrust against Kyiv, using precision strikes.

Other key cities would be encircled by Putin’s tanks and troops while being pounded by planes and helicopter gunships.

The grave assessment came as Ukraine president Volodymyr Zelensky declared tomorrow a day of unity and urged his people to stand and sing the national anthem at 10am.

He said: “We do not know how to give up and we will not learn to do so. We believe in our own strength and will continue to build the future together. We are united by love for Ukraine.”

Last night Boris Johnson held crisis talks with US President Joe Biden, after saying it was “pretty clear” Russia will invade within days.

He warned an invasion would result in a “protracted crisis with far reaching damage for both Russia and the world.”

But a Downing Street spokesman insisted there “remained a crucial window for diplomacy and for Russia to step back from its threats towards Ukraine”.

No10 said Boris and Biden had agreed to stay in touch as the situation “evolves”.

Reports warned 60 per cent of Russia’s ground forces are in striking range. 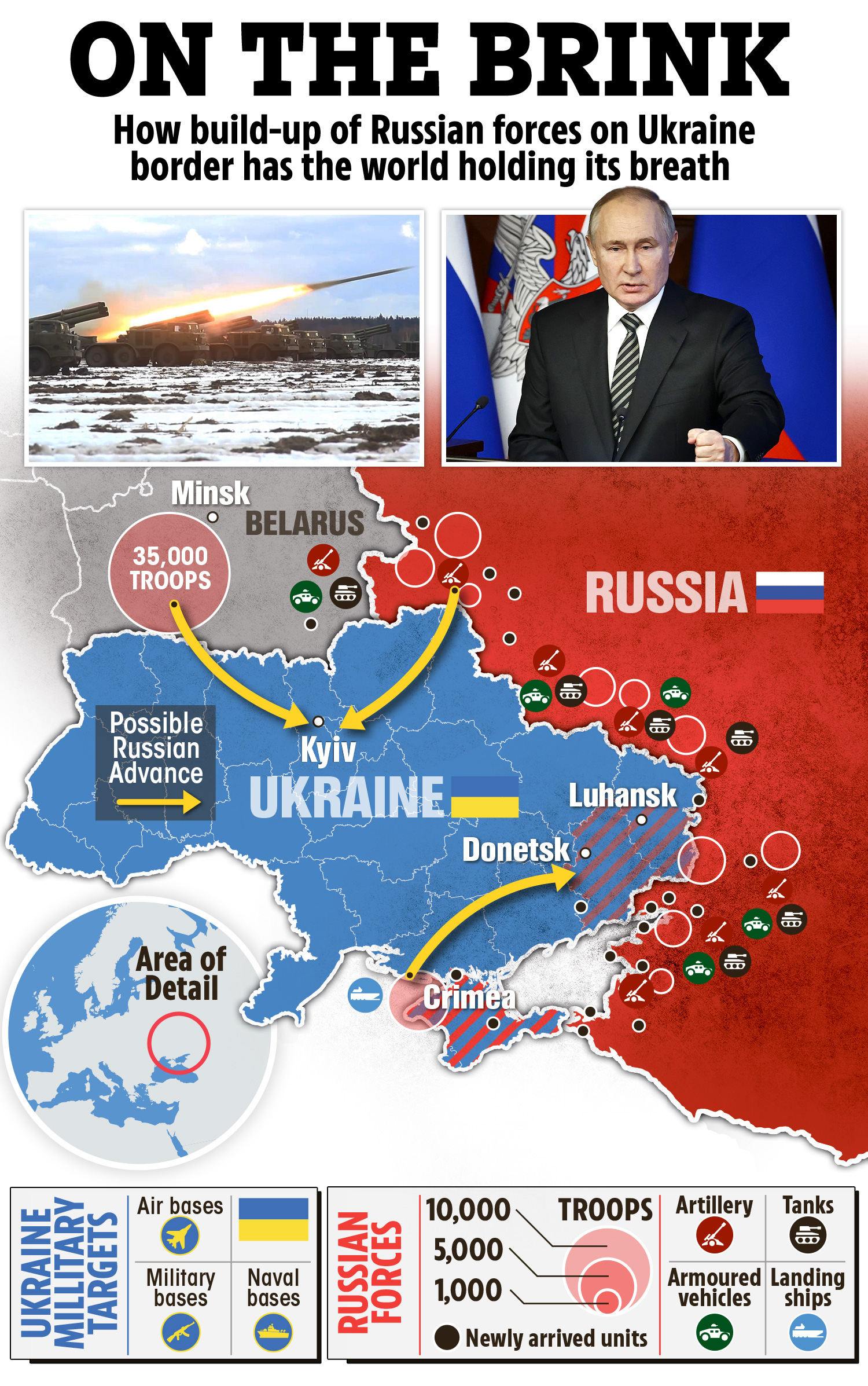 at February 15, 2022
Email ThisBlogThis!Share to TwitterShare to FacebookShare to Pinterest
Labels: BBC News