Urgent booze warning as millions of Brits drinking ‘dangerous’ levels at home – are you one of them?

MILLIONS of Brits are boozing at a “dangerous” level, with drinking alcohol at home blamed for a rise of the pandemic.

Take our quiz below to find out if you are at high risk of alcohol dependence, based on your habits.

New data from the Government’s Office for Health Improvement and Disparities shows millions of people in England are downing bottles of wine, beers and spirits that are harmful to their health.

Professor Julia Sinclair, chair of the addictions faculty at the Royal College of Psychiatrists, said drinking at home during the pandemic had become problematic.

She said drinking at home “can go on for hours” and people are not keeping track of their measures.

Many people have not yet reached the stage where they realise they have a problem and are causing themselves “silent harm”, she said.

She added: “You kind of realise ‘Oh, that bottle of wine has gone, where did that go?’”

Prof Sinclair said that drinking during lockdowns had pushed people “over the edge” into dependency on booze – and they will struggle to come back from it.

There has been a big jump in the numbers drinking at levels considered to be high risk.

“Increasing or higher risk drinking” is defined by the alcohol use disorders identification test (audit) used by professionals.

The official data shows that 18.1 per cent of adults in England, or eight million, were drinking at increasing or higher risk in the three months to the end of October 2021.

A quarter (25.2 per cent) of adult men (about 5.5 million people) were harmfully drinking in October compared with 17.8 per cent (about four million people) in February 2020.

In an interview with PA news agency, Prof Sinclair said while some people had formed new habits, others were still coping with uncertainty and anxiety caused by the pandemic.

“Sometimes with alcohol, we forget that for some people there is a huge amount of trauma behind it all but, actually, for other people, it’s just habitual use of an addictive product. Some habits are now getting ingrained.”

Asked if the current drinking levels could be considered the “new normal”, Prof Sinclair said it was unlikely people would switch back to their pre-Covid habits.

She said: “What we’re going to see is that some people who were perhaps drinking at a higher risk but weren’t physically dependent will have pushed themselves into being physically dependent, and they’re not the group who can suddenly wind back from this.

“What was really clear was that just even nine months of drinking, as we saw in 2020 (first year of the pandemic), was enough to push a whole load of people over the edge.

“We’ve yet to see the data from this year but my guess anecdotally would be that it is going to be substantial.”

Prof Sinclair said that “some people who never drank except when they went out or went to the pub” are now drinking at home.

And the data suggest they have not made efforts to return to their previous behaviours, therefore are drinking much more than before.

“It’s ‘Should we open another bottle?’

Prof Sinclair said although you “can get away with it when you’re 20 and 30”, you can’t get away from the harms of alcohol as you get older.

She said patients were now coming into hospitals in a “much more severe” state now than ever before.

Are you drinking too much?

The NHS recommendation is that adults consume no more than 14 units of alcohol per week.

Most people count their drinks as “one glass of wine” or “a pint of beer”, rather than units, however.

This test reveals if your drinking is a problem based both on how much you consume, and your behaviour around booze.

For reference, here are some unit examples: 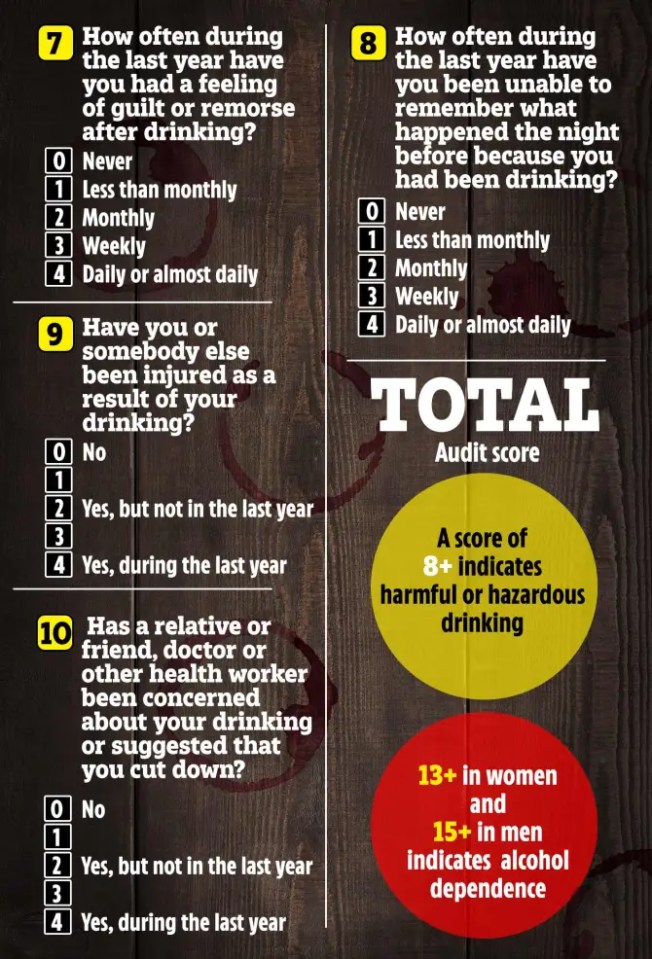 What your score means

Elaine says: If you drink fewer than 14 units a week, you’re at lower risk of dependence on alcohol and of health problems from drinking.

The good news is, if you sometimes drink more than 14 units a week it should not be too hard to cut back.

Be careful not to binge drink. It can lead to accidents and even alcohol poisoning.

If you drink 14 units a week, spread them out, with at least three drink-free days each week.

Elaine says: It’s important for you to know that your pattern of drinking could be dangerous to your health, because you could be drinking more than 14 units a week.

You could be at an increasing risk of developing some serious health problems and increasing your risk of alcohol dependence.

Now is the time to cut back on how much you have been drinking.

Elaine says: Your drinking could be very dangerous to your health.

Regularly drinking much more than the low-risk guideline of 14 units a week causes serious harm – seven types of cancer (including breast), liver and heart disease, and high blood pressure.

You could be at high risk of alcohol dependence and should think seriously about drinking less and perhaps find expert support to help you.

Elaine says: Your answers suggest you drink much more than the low-risk guideline of 14 units a week and your drinking is dangerous to your health.

It may already be causing problems to your physical or mental health – or both.

at January 17, 2022
Email ThisBlogThis!Share to TwitterShare to FacebookShare to Pinterest
Labels: BBC News