RUSSIA has moved elite paratroopers who it’s feared could be used for a lightning strike on Kiev close to its border with Ukraine.

Vladimir Putin has already massed 127,000 troops on its neighbour’s border amid warnings a Russian invasion could trigger World War Three.

The Kremlin has been beefing up its force on the border with Ukraine with the deployment of the crack 217th Guards Parachute Regiment of the 98th Airborne Division.

The deployment was reported by independent Russian researchers known as the Conflict Intelligence Team (CIT).

“This is the first confirmed video of paratroopers moving closer to the border with Ukraine,” said the Team.

“In any large-scale attack on the territory of Ukraine, the Airborne Forces should play a decisive role.”

The CIT referenced reports that one Russian tactic could be a rapid advance on Ukraine, with the possible installation of a pro-Kremlin puppet government.

Screams heard after boy, 5, 'stabbed' to death as woman, 49, arrested

Dad, 44, charged with murder after daughter, 19, killed in car smash

'Sadistic' girl, 16, 'laughed as she tortured a doctor to death in park'

“We consider an offensive from the territory of Belarus and/or the Bryansk region in the direction of the Ukrainian capital as at least one of the possible scenarios of Russian actions in Ukraine.”

It comes as Boris Johnson warned of Russian plans for a “lightning war” that could take out the Kiev amid reports its troops are already in Ukraine.

Other Members of the alliance – including Denmark, Spain, Bulgaria and the Netherlands – are sending more fighter jets and warships to Eastern Europe to bolster defences in the region.

The US has also put 8,500 troops on alert to deploy at short notice, which Russia said caused it “great concern”.

Isabel Sawkins, a research fellow at the Henry Jackson Society, thinks any potential conflict in Eastern Europe would not be confined to its borders.

She told The Sun: “The crisis has the potential to extend its tentacles into all corners of the globe.”

Analysts say Putin is now almost certain to launch a limited strike in the next ten days — which could include an attack on the three-million-strong population of the Ukrainian capital.

The Kremlin strongman has 127,000 troops, tanks, artillery and missile batteries plus warjets and drones ringing the border with its pro-Western neighbour after peace talks failed.

He is also ready to draft his favourite “war toys” into battle in Ukraine – including robot tanks, kamikaze stealth drones and paratrooper dogs.

He hopes a lightning victory will boost him back home after being dogged by a flagging economy and Covid woes.

Military sources say another 30 trainloads of troops have poured into Ukraine’s pro-Putin neighbour Belarus in recent days – and 200 more could follow.

The move – claimed to be for “military exercises” in Belarus – sparked alarm in Kiev, just 100 miles from the Belarusian border.

The conflict could see the first combat use of remote-controlled tanks, and the first ever aerial dogfights between unmanned drones. 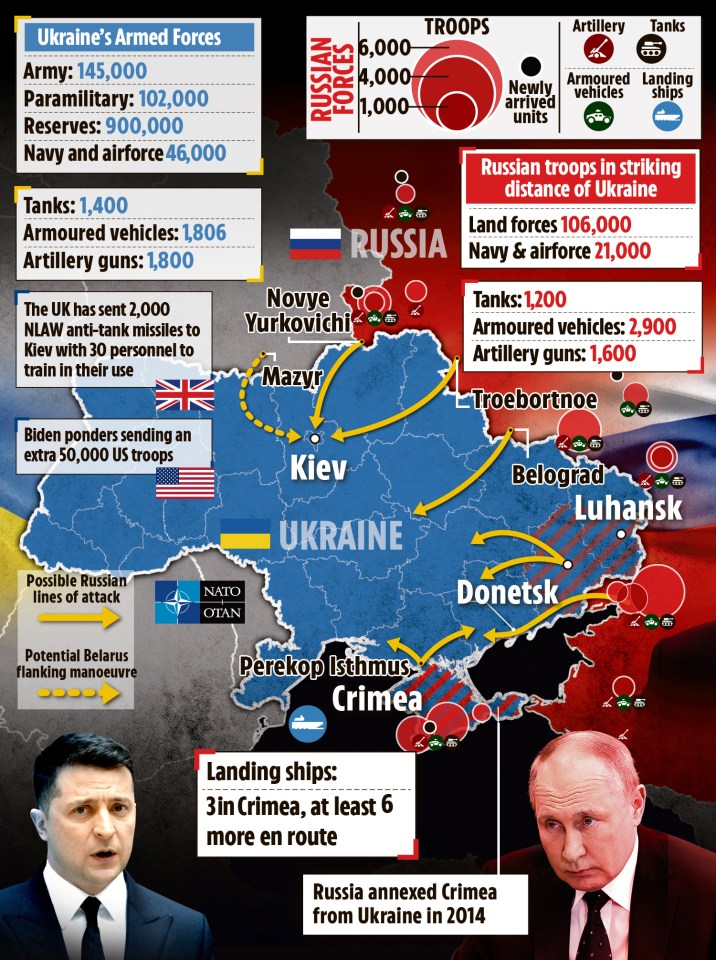