A NEW Covid strain dubbed “Omicron’s sister” has been designated a variant under investigation by UK health chiefs, it is understood.

It originally emerged in early December, not long after Omicron started spreading around the world.

UKHSA is expected to formally confirm it is now under investigation in this afternoon’s technical briefing.

It is a sub-variant of Omicron, and has many of the same mutations – but current case rates are very low.

Crucially though, it is missing a mutation that allows labs to discover and then flag up cases.

Scientists have suggested it could be more transmissible, and harder to distinguish from other variants when using PCR tests.

But experts have said there is little to be concerned about at the moment and there is no evidence of it being any more severe.

It has been seen in many countries since December 6 and is nowhere near outcompeting Omicron.

The sub-lineage is known as BA.2, with most cases of Omicron from the original BA.1 variant.

The UKHSA’s incident director, Dr Meera Chand, said the sub-variant follows the pattern of “viruses to evolve and mutate”.

Adding: “Our continued genomic surveillance allows us to detect them and assess whether they are significant.”

Tom Peacock, a virologist at Imperial College London, said early evidence from suggested there was no difference in severity.

He tweeted: “There is likely to be minimal differences in vaccine effectiveness against BA.1 and BA.2.

“*Very* early observations from India and Denmark suggest there is no dramatic difference in severity compared to BA.1. This data should become more solid (one way or another) in the coming weeks.

“So how worried should we be? Those working in sequencing/surveillance should definitely be keeping a close eye on BA.2 (and very likely already are!).

“Personally, I’m not sure BA.2 is going to have a substantial impact on the current Omicron wave of the pandemic…”

Initial studies from Denmark, where the sub-variant has spread quickly and makes up half of all Omicron cases, shows no difference in hospitalisation risk.

Danish health officials also say vaccines are thought to still be as effective.

But more data is needed to see if it could be more transmissible than original Omicron.

Around 2,093 cases of BA.2 have been recorded on a database from 22 countries so far.

The new form was first spotted in South Africa, Australia and Canada – initially found in a South African man who had travelled from Gauteng, a hotbed in the Omicron outbreak.

As of January 10, the UK Health Security Agency confirmed there had been 53 cases of the sub-variant in the country.

In a report it added: “UKHSA are continuing to monitor data on the BA.2 sub-lineage closely.”

It comes as the R rate has fallen dramatically this week in another sign that Omicron has peaked in England. 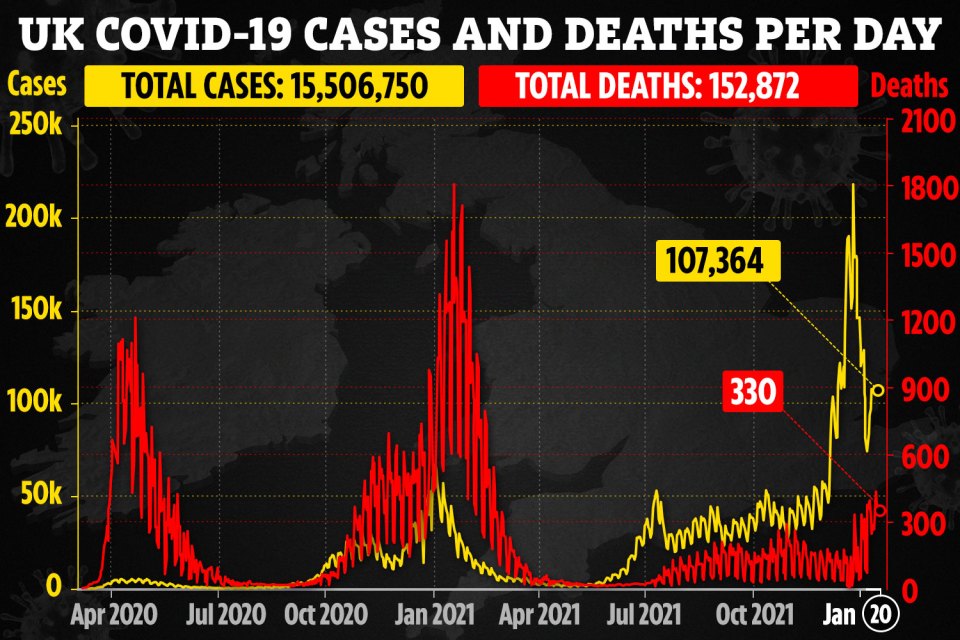 It comes as Prime Minister Boris Johnson announced an end to Plan B restrictions, with working from home being scrapped.

Vaccine passports will be dumped along with requirement to wear face masks anywhere indoors.

The guidance to work from home was dropped effective immediately – meaning Brits could go back to the office this week.

The remaining rules will expire on January 26, meaning the changes will kick in on Thursday morning.

Scientists have also said that Omicron deaths have peaked and will start to drop within days.