Boris Johnson yesterday added to calls for the UK Health and Security Agency to revisit guidance that says Brits should quarantine for at least a week.

His remarks came as boffins were forced to admit they were wrong to slap down calls to slash isolation with untrue claims the US rules are different.

The UKHSA has already recommended moving from ten to seven days last month as long as people test negative on days six and seven.

But in a blog last week the agency said our rules couldn’t be compared “like with like” with America’s, where people can quit quarantine on day 5.

It claimed isolation in Britain was counted from the day someone experienced symptoms, whereas in the US people had to wait for a positive test.

However, the agency has now admitted the UK and USA measure the start of Covid isolation from the same point.

It was forced to correct its advice to MPs, NHS leaders and business chiefs.

Many have been calling for Britain to look at slashing isolation further to stop the country grinding to a halt.

Initial data shows up to a third of people with Covid are still infectious on day six – which is why scientists are reluctant to cut quarantine further.

But they are still examining other studies to see whether it might be possible.

GO WITH THE FLOW

A string of hugely positive studies show Omicron IS milder than other strains, with the first official UK report revealing the risk of hospitalisation is 50 to 70 per cent lower than with Delta.

Boris yesterday said he’s “looking at” slashing the quarantine period and will do so if scientists give the green light.

He made the remarks while speaking during a visit to a vaccination centre in his Uxbridge constituency this morning.

“We’re looking at that and we’ll act according to the science as we always have.

“But what I would say to everybody is Omicron is still out there and it’s incredibly contagious.

“Everyone will know somebody who has had it, it can be pretty unpleasant.”

The PM suggested self-isolation rules will continue to stay in place for “as long as they’re very important” in stopping the spread of Covid.

And this morning health minister Ed Argar added to the growing pressure on scientists to change their stance.

He said: “There is an ongoing debate whether it could be reduced to five days.

“If that were possible safely then of course that could have some benefits in terms of reducing critical workforce absence.

“But it’s a scientific decision based upon whether reducing it would risk increasing the number of people who might still be infectious in circulation.

“We keep everything under review and if that scientific advice changes then of course we’ll look at that.”

Mr Argar added the PM is keen to drop all Covid restrictions as soon as possible amid hopes Plan B will be scrapped later this month.

He said: “We have seen in recent days those cases, particularly in London, starting to plateau and come down and hospitalisations starting to slow.

“It’s absolutely vital that as soon as it’s safe to do so, as soon as we’re able to do so, we ease those restrictions – for example working from home or otherwise – and try to get our society back to normal as we learn to live with this virus.”

The US has already cut self-isolation to five days, prompting calls for Britain to follow suit.

Currently vaccinated people in the UK have to quarantine for up to 10 days if they catch the virus.

Those who take two negative lateral flow tests on days 6 and 7 after their positive swab can end their isolation early.

Scotland, Wales, and Northern Ireland all set their own self-isolation rules.

Surging cases caused by the Omicron variant have forced millions of Brits into self-isolation and sparked mass workplace absences.

Public services including the NHS are current struggling with staff shortages because so many people are off.

Education secretary Nadhim Zahawi yesterday because the first senior minister to publicly suggest the change is on the cards.

And one government source told the Telegraph that 60 per cent of Boris Johnson’s cabinet are in favour of the move.

Yesterday senior Cabinet minister Michael Gove said that there are “better times ahead” and that Britain is close to learning to live with Covid.

But he warned the country isn’t “there yet” and that there will be “difficult weeks ahead” with Omicron.

He also ruled out scrapping free lateral flow tests until the current wave is under control.

He said the kits will remain without charge for “as long as we need them” to curb the spread of the virus.

Mr Gove said: “We are moving to a situation where it is possible to say we can live with Covid, and the pressure on the NHS and vital public services is abating.

“But it’s absolutely vital to recognise that we are not there yet and there will be some difficult weeks ahead.

“And that is why we all need to continue to test, continue if we are positive to isolate, and continue broadly to support the NHS as it goes through a challenging period.”

He also defended gloomy predictions that there would be 75,000 deaths from Omicron which scientists have now admitted were wrong.

The minister said that “nobody is setting out to scaremonger” and it would be “irresponsible” for the Government not to prepare for worst case scenarios.

His remarks come after Britain recorded a fifth daily drop in new cases with scientists saying there are signs Omicron is now peaking across the country. 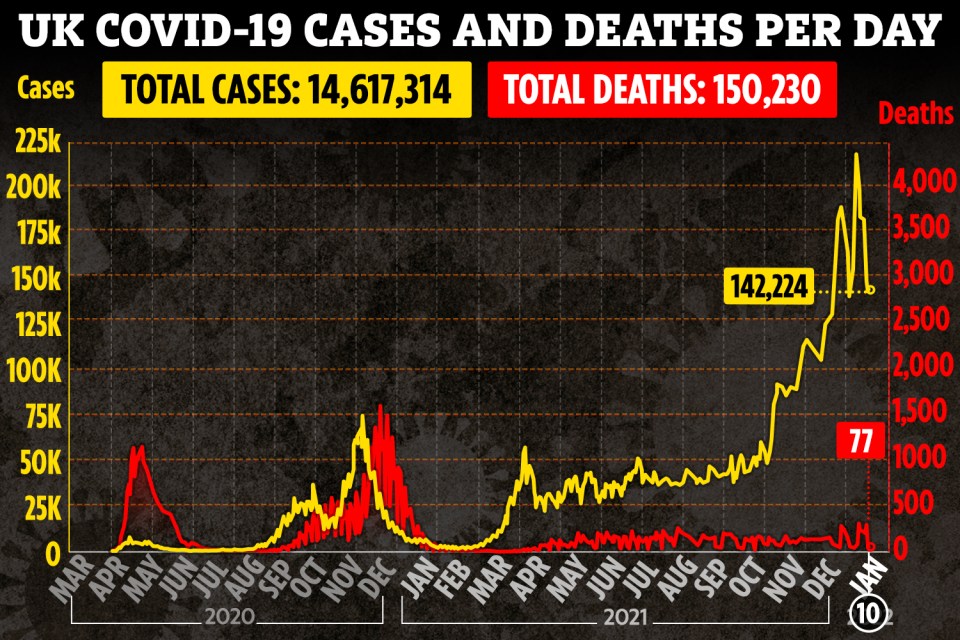