THE MET Office has dealt a blow to sun-worshipping Brits in hope of a heatwave for the last month of summer.

Weather conditions are expected to settle down in the coming days with no sign of scorching hot temperatures ahead. 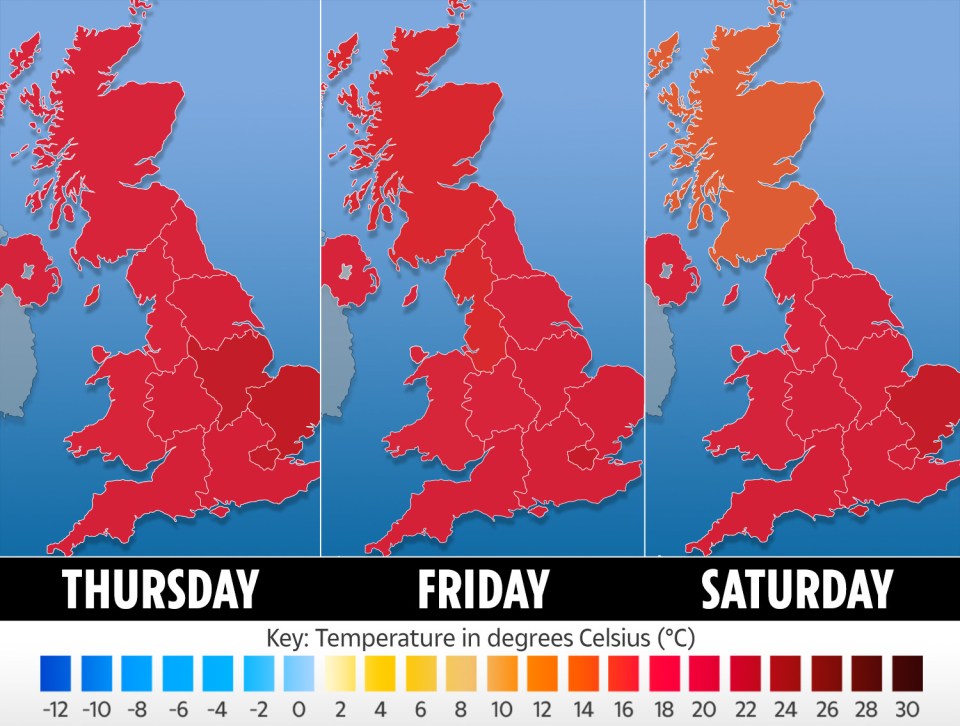 “Do not expect to see heatwave conditions, but dry, sunny spells for many,” Mr Madge said about this month.

“August has essentially been a case of mixed fortune with some areas seeing drier weather than usual, while others have virtually had a whole month of rainfall in just 10 days.

“We’re not expecting to see record-breaking weather, as there have certainly been wetter Augusts in the past but many areas have faced a very wet and intense period of rain.

Read our UK weather live blog for the latest forecasts

“We are putting this down to an area of low pressure which is moving slowly across the country bringing the damp conditions many have seen.”

The first ten days of August has seen Brits battered by heavy rainfall and lightning storms.

According to the Met Office, 46mm of rain has fallen so far in London which usually sees 53mm of rain for the entire month of August.

For the country, the average rainfall is 89mm for the summer month however so far almost 40% of that total rain has fallen.

But looking ahead, the UK will peak around 23C over the next few days with many expected to experience heavy rain.

Today will have rain over the north of England Scotland with lighter rain forecast further south.

Make sure to bring a jumper with your brolly while out walking in the north as temperatures will turn quite chilly.

The weather conditions for the weekend are “unusually uncertain”, the Met Office has said.

Northern areas will be showery and breezy but a low pressure front coming in from the Atlantic could bring even worse conditions.

However, it is not yet known how the front will develop in the coming days.

There is dry and cloudy weather expected for the rest over the weekend.

Extreme weather patterns have been the norm over recent weeks both in mainland Europe and the UK.

On Tuesday sand dunes caught on fire after temperatures peaked in the mid-twenties.

In Wales, aerial footage showed smoke billowing from a sand dune that had gone up in flames.

The footage was captured on sand dunes near Borth and threatened the nearby Ynyslas Golf Course.

Fire crews were called and arrived at the scene to tackle the blaze on the dunes at around 3pm yesterday.

It is unclear what caused the unexpected blaze but the fire comes after the UK experienced an extreme heatwave.

In Europe an Alicante resort has been hit by a freak “mini-tsunami” caused by a blowtorch Saharan heat surge that is forecast to send temperatures in Spain rocketing to 47C.

The bizarre rise in the tide, which was sparked by a hellish heat wave moving in from Africa, swept through the coastal town of Santa Pola last night.

The rare tidal phenomena flooded the beach, promenade and nearby streets, with cars damaged and boats set adrift.

It was caused by a dramatic drop in atmospheric pressure which caused the sea to swell scorching hot, dry air pushes in from North Africa.

With the mercury in the Med already soaring beyond 40C, Spanish, Portuguese and Italian forecasters have issued heat alerts.