THE Iranian ambassador today slammed claims that the Gulf Tanker was hijacked by ‘Iranian commandos’ – calling them ‘false rumours.’

Mohsen Baharvand, condemned the allegations in a strongly worded letter after Iranian internationals were alleged to have headed the nine-strong armed group that clambered aboard the Asphalt Princess yesterday.

The reports claim that the vessel had been ordered ‘to sail to Tehran’ according to the shipping authority Lloyd’s List Maritime Intelligence.

The armed gang reportedly stormed the ship on Tuesday close to the Strait of Hormuz – a waterway where around a fifth of the world’s oil is transported.

It’s reported that the commandos have now left the vessel and the ship is considered “safe”, according to officials.

The White House branded the initial reports “deeply concerning”, with the hijackers suspected of being backed by Tehran.

But today Mohsen Baharvand, vehemently denied the allegations as ‘false rumours’ via a letter issued to the Secretary General of the International Maritime Organization, according to Fars news agency.

The outlet reported that the ambassador blamed political motives behind the accusations amid language aimed at Iran which “mixed force and threats.”

He also allegedly condemned the actions of the International Convention for the Safety of Maritime Safety for their “destabilizing practices in the region.”

It echoed claimed yesterday by Abolfazl Shekarchi, Iran’s senior armed forces spokesman, rubbished reports of a potential hijacking in the Gulf as a “kind of psychological warfare and setting the stage for new bouts of adventurism.”

It came amid increased tensions in the region as Boris Johnson warned Iran that it would face “consequences” for killing a British security guard at sea in a suspected drone strike last week.

Army veteran Adrian Underwood has been named as the victim, with British special forces team believed to have been deployed to the region – as the UK and allies mulled a cyber strike retaliation.

A US military ship was expected to be sent towards the area to monitor the situation.

Officials in Washington said the move doesn’t imply military action will be taken.

The Asphalt Princess is owned by a UAE firm and registered in Panama. There are no Brits on board.

Sources told The Times they believe Iranian military or proxies boarded the vessel about 60 miles off the coast of Fujairah.

It’s believed the asphalt and bitumen tanker was heading to the port of Sohar on Oman’s northern coast when it was attacked. 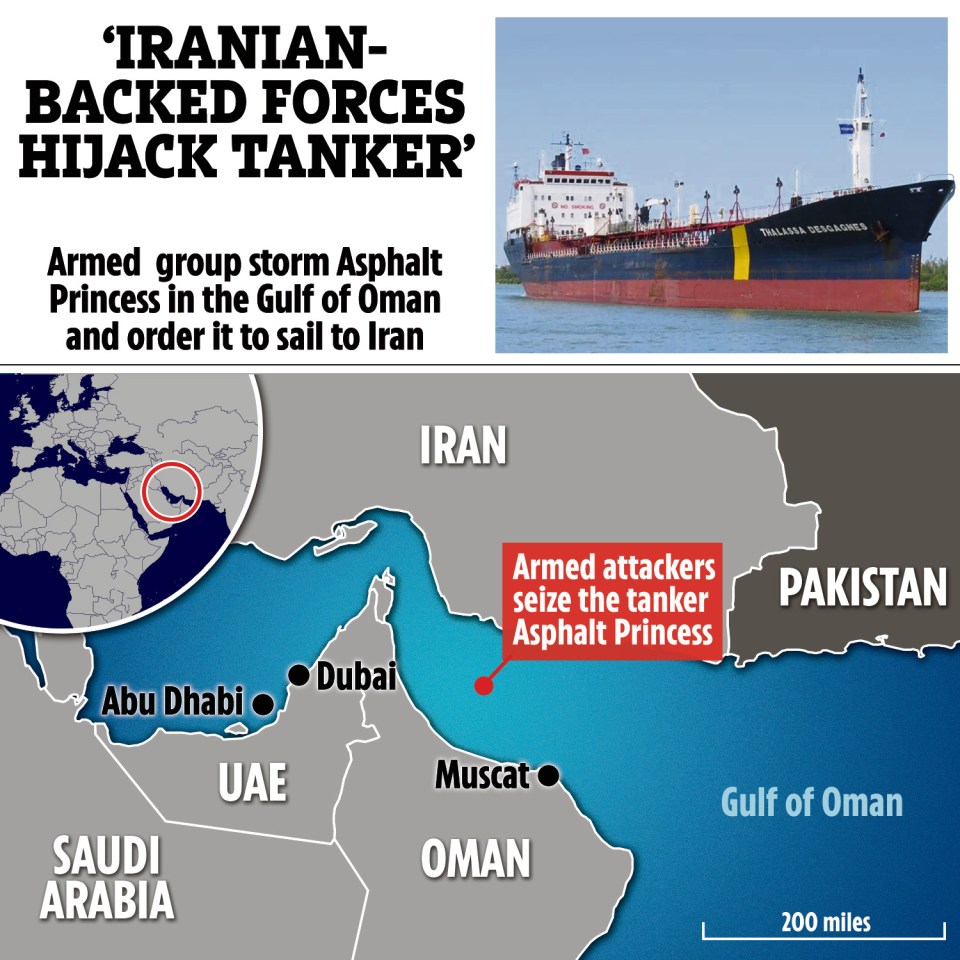 At least six other tankers also sent out warnings saying they were “not under command”, according to shipping website Marine Traffic.

Queen Ematha, Golden Brilliant, Jag Pooja and Abyss were among those to raise the alarm through their Automatic Identification Systems.

Oil and shipping expert Ranjith Raja told Reuters: “At the same time, if they are in the same vicinity and in the same place, then very rarely that happens.

“Not all the vessels would lose their engines or their capability to steer at the same time.”

Iran’s Revolutionary Guards denied its forces were involved and claimed the incident was a pretext for “hostile action”.

A UK Foreign Office spokesman said they were “urgently investigating” the suspected hijacking.

The Dubai-based company that owns the Asphalt Princess had another ship hijacked two years ago by revolutionary guards.

The emergency comes after an attack on the MV Mercer Street killed a British security guard and a Romanian soldier, leaving the UK and its allies mulling retaliation.

British special forces are planning a ‘kill or capture‘ manhunt mission on the Iran-backed terrorists who attacked the Israeli-operated tanker last week.

The “outrageous” and “deliberate” attack on the vessel, which is linked to an Israeli billionaire, occurred off Oman in the Arabian Sea.

The PM said he was working with the US and Israel on how to respond.

US Secretary of State Antony Blinken branded the incident a “direct threat to freedom of navigation and commerce”.

Britain, Romania and Liberia told the UN Security Council that it was “highly likely” that Iran used at least one drone to carry out the attack, MailOnline reported.

Iran has denied involvement in the suspected drone attack.

Since 2019, the waters off Fujairah have seen a series of explosions and hijackings. The U.S. Navy blamed Iran for a series of limpet mine attacks on vessels that damaged tankers.

In July, 2019, Iran seized the British-flagged Stena Impero on the Strait of Hormuz as it headed from the Iranian port of Bandar Abbas.

The raid came after authorities in Gibraltar seized an Iranian supertanker carrying £93 million ($130 million) of crude oil on suspicion it was breaking EU sanctions by shipping oil to Syria.

Both vessels were later released.

Last July, an oil tanker sought by the US over allegedly breaking sanctions on Iran was hijacked off the Emirati coast.

Toddler seriously injured after being hit by lorry in Birmingham

The vessel and its crew ended up in Iran, though Tehran never acknowledged the incident.

Tehran claimed officials stopped the vessel for “polluting” but it came at a time ahead of tense negotiations over frozen Iranian assets in South Korean bank accounts.