GREECE is experiencing its most severe heatwave in 30 years – causing residents of it’s second biggest island to evacuate.

Wildfires are ripping through the Greek island of Evia for a seventh day today, prompting residents to flee to safety by sea.

A firefighter tries to extinguish a wildfire burning in the village of Pefki, on the island of Evia, Greece[/caption] Pillars of billowing smoke and ash turned the sky orange and blocked out the sun above Greece’s second-largest island[/caption]

More than 2,000 people have already been evacuated, with elderly residents carried on to ferries.

Parts of the island have been badly destroyed, with officials saying not enough help has been sent to help tackle the blazes.

Greece is experiencing its most severe heatwave in 30 years in which temperatures have spiked to 45C (113F).

A number of wildfires have struck the country in recent days as temperatures rose to 45C – including one fire in a northern suburb of the capital Athens which has now subsided. 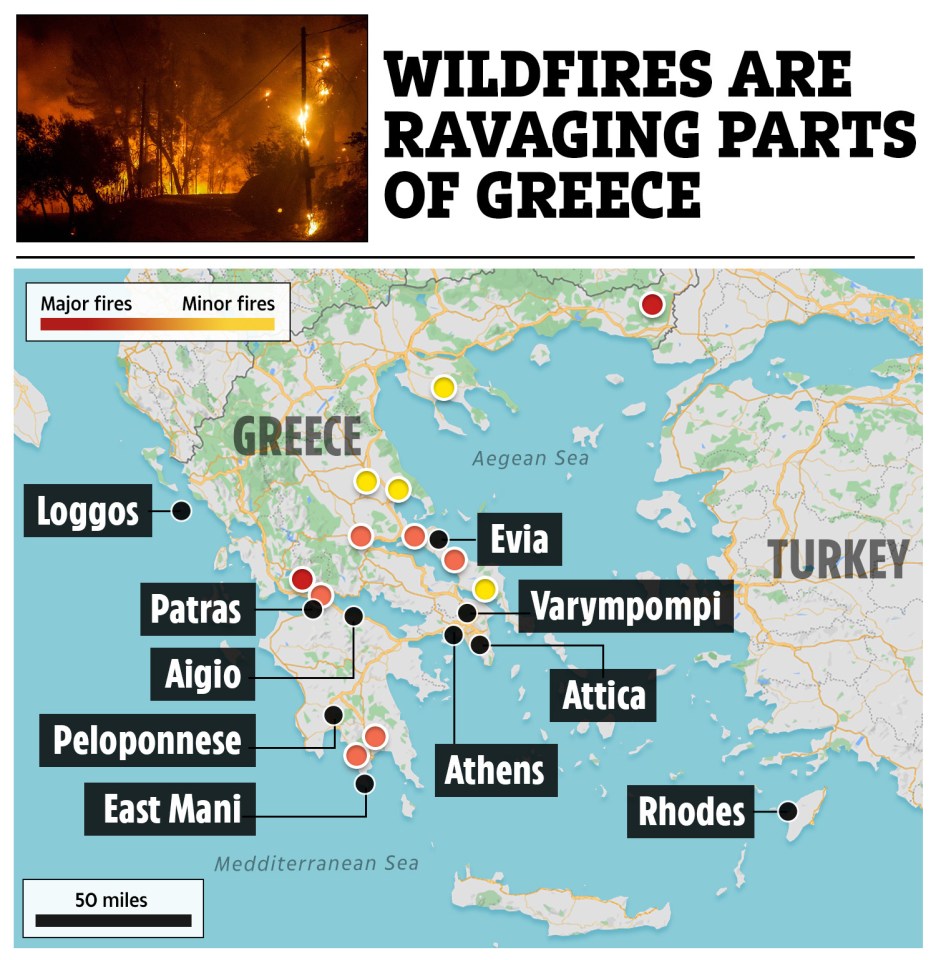 Temperatures of more than 40C and high winds have fanned the flames in Greece, with some places seeing the mercury soar as high as 47C.

Local fire crews and volunteers are being supported by 100 firefighters from Ukraine, 112 from Romania who have brought 23 fire trucks, along with 34 firefighters and 14 vehicles from Serbia.

The UK sent at least 20 firefighters, who are currently battling the blaze now.

Thousands of people have been evacuated from their homes and hundreds of frantic firefighters have been working to control the blazes.

“We thank you for standing by Greece during these trying times,” he wrote on Twitter.

Girl, 15, died after 'being strangled & having throat crushed' at hol park

Unearthed Tesco receipt from 1989 shows just how different prices were

Hilarious pics show world’s worst lookalikes… can YOU guess who they are?

Elsewhere in Greece, fires in the Peloponnese region are said to be stable and fires in the northern Athens suburb have subsided.

“The situation in Attica (which encompasses Athens) is better but we are afraid of the danger of flare-ups,” Mr Hardalias said.

Similar scenes are being seen in several other EU nations – with Italy and Turkey also plagued by wildfires, with hundreds of thousands of acres burned.