Three Covid symptoms ‘MUST be included on the official NHS list’

Up to half of people don’t get the classic cough, fever or lost sense of smell so they can’t get a test, meaning they slip through the net and spread the virus.

New symptoms must be added to the official list, experts have warned[/caption]

Experts led by University College London are calling for a longer list of symptoms which could include sniffles, tiredness, chills and diarrhoea.

They said this will make it easier for people to get tests on the NHS and stop outbreaks.

“For those who do get the core symptoms it takes two to three days longer so it’s hard to stop transmission.

“We want to keep cases low without the need for population-wide restrictions.

“That comes down to a nimble and more refined test, trace and isolate system. That will help us get back to normal more quickly.”

Signs of the illness are changing with new variants and they are different in younger people, who now make up most cases thanks to jabs protecting the elderly.

Health chiefs in the US and EU each use more than 10 official symptoms to spot cases but the UK has just three, the team pointed out in the British Medical Journal.

An Office for National Statistics report yesterday found that 60 per cent of people who test positive in the UK do get symptoms.

Cough, headache, weakness and fever were most common in June.

But sore throat and muscle aches – which are not on the official list – were more common than lost smell or taste – which are on it.

Mix-ups over symptoms are also making it hard to spot people with long Covid.

Oxford University scientists found GPs only diagnosed 23,000 cases of the lingering illness between February 2020 and April 2021, but surveys suggest two million have had it. 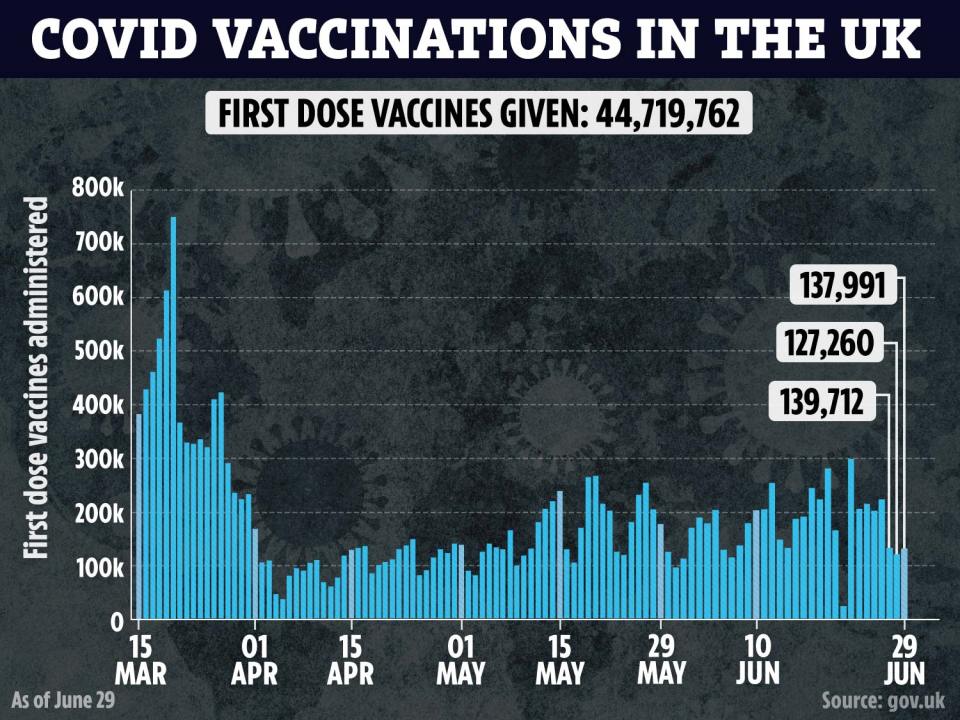 They said in the British Journal of General Practice that many people are suffering in silence and doctors aren’t properly recording cases when patients do seek help.

Dr Ben Goldacre said: “We were very surprised to see almost a hundred-fold difference between population survey estimates and formally recorded diagnoses for the same condition.”

Earlier this month we told how an expert warned there are 21 different coronavirus symptoms to look out for and most just feel like a common cold.

Professor Tim Spector, from King’s College London and lead on the Covid Symptom Study app has now said that depending on how much protection you have had from a vaccine, then these symptoms could be different.

He explained: “People urgently need to know there are more than just the three classic symptoms.

Gina Coladangelo's husband's AGONY as she dumps him for love rat

Millions of Brits lined up for Covid booster jabs from September

“The top symptoms being currently logged in the Zoe app are; headache, runny nose, sneezing, fatigue and sore throat, which for many will feel more like a common cold.

“The earlier people can catch the infection, the quicker they can self-isolate until symptoms abate and stop the spread.

“We encourage anyone feeling under the weather to take a test as soon as they can and stay at home.”

at July 01, 2021
Email ThisBlogThis!Share to TwitterShare to FacebookShare to Pinterest
Labels: BBC News