Plans to bring in compulsory coronavirus certifications for mass gatherings are set to shelved, The Daily Mail reports.

Covid vaccine passports for festivals or sports events won’t be needed from July 19, it’s reported[/caption] Ministers will replace that rule with 20-minute lateral flow tests taken each day, anyone testing negative would be free to go out[/caption]

But organisers will be able to launch their own systems so attendees can prove they are Covid risk-free, it’s claimed.

The Premier League is said to be among the companies planning to introduce a Covid certification scheme.

It comes after a furious backlash from the hospitality industry forced a u-turn over controversial government plans for Covid passports in pubs and restaurants.

It comes as Boris Johnson told Cabinet he is “increasingly confident” that Britain can reopen fully on July 19.

Meanwhile, Health Secretary Sajid Javid is planning to unveil a new NHS app which could allow Brits to travel to Europe this summer.

Tourists could bypass quarantine if they’re double jabbed, show a negative test before departure or prove they caught Covid in the past 180 days.

And Brits who have had both jabs will no longer have to isolate for ten days if they come into contact with a Covid victim from July 19, The Sun can reveal.

Anyone alerted by Test and Trace that they have been near someone who has tested positive must — by law — isolate at home. 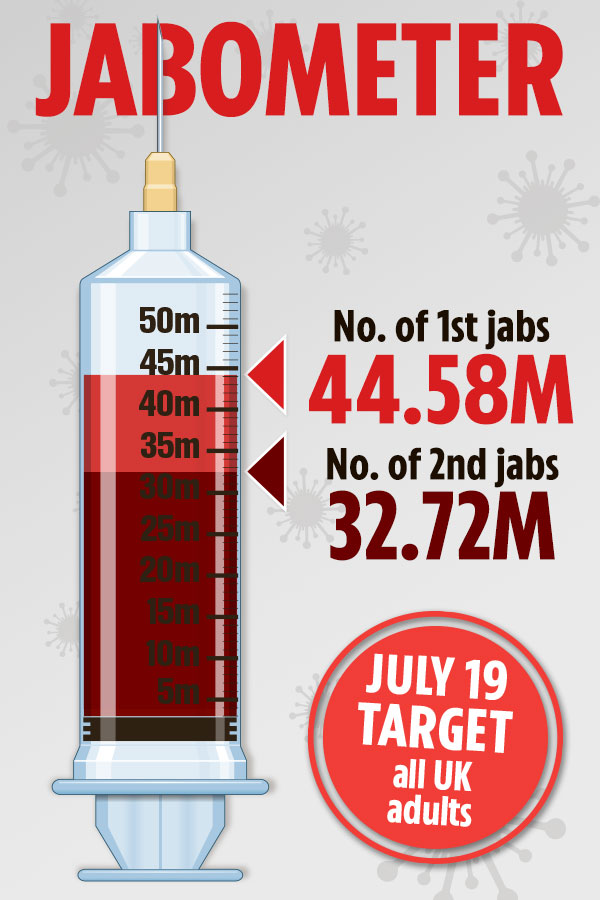 But following a successful pilot scheme since April, ministers are set to replace that rule for the fully vaccinated with 20-minute lateral flow tests taken each day for the same amount of time.

The Prime Minister believes the country must learn to “to live with” the disease, with 84 per cent of adults now having received at least one vaccine dose.

Mr Johnson said the latest Covid data “shows cases continuing to rise but hospitalisations and deaths have seen a much shallower growth”.

A a government source told the Daily Mail the July 19 date will go ahead even if cases more than double from current figures.

The source said: “We need to get used to the idea of treating Covid more like flu.

“People have the flu vaccine, which helps reduce serious illness, but we still get large numbers of cases and significant numbers of deaths.

“But that is not in itself a reason not to go ahead, provided hospitalisations and deaths remain at relatively low levels.”

SALT IN THE WOUND

NHS worker suffers horrific injuries after being knocked out by man

The EU has threatened to slap Brits with quarantines because of the surging Indian – or Delta – variant cases here.

Talks with Washington about opening the US border have also stalled.