BORIS Johnson was last night accused of letting the Germans steal a march in the sunbed wars as double-jabbed Brits languished at home.

Germans are free to travel and have wasted no time getting the towels down despite the EU’s bungled jabs rollout and the country averaging more than 100 deaths a day.

Angela Merkel and Boris Johnson walk on the beach at the G7 summit in Carbis Bay, Cornwall[/caption]

Thousands hit beaches in Gran Canaria, Majorca and mainland Spain to soak up the warm sun while frustrated Brits were stuck at home in the cold and rain.

They have free access to travel to most of Europe and only need one negative PCR test before going home while Brits returning from amber list countries — such as France, Greece and Spain — must isolate for ten days and get tested twice.

German health minister Jens Spahn has launched a digital vaccine passport valid across the EU and from Friday the fully vaccinated can enter Germany if two weeks have passed since their jab.

Scientists, MPs, travel bosses and holidaymakers last night warned Brits risk being left behind despite our plummeting death rate and the fact that almost all adults have had at least one vaccine shot.

Yesterday just five Brits were confirmed to have died as hospitalisations remained extremely low sparking claims the spooked PM is “jumping at shadows”.

Despite the statistics, The Sun can reveal the green list for safe travel is “unlikely” to be added to at a review this week. Another is due at the end of July, but will come too late for many holidaymakers.

Mr Johnson did say the country was “looking good” for domestic unlocking on July 19 but he was downbeat about foreign holidays.

He said: “There will be hassle, there will be delays I’m afraid, because the priority has to be to keep the country safe and to stop the virus coming back in.”

Warning of a “rough winter”, he said: “You can never exclude there will be some new disease, some new horror that we simply haven’t budgeted for, or accounted for.”

Health Secretary Matt Hancock said his department was working on measures to allow fully vaccinated Brits more freedom, but he warned: “We’re not ready to be able to take that step yet, but it’s something I want to see and we will introduce, subject to clinical advice, as soon as it’s reasonable.”

The foot-dragging comes despite Department of Health figures showing that no vaccine-busting Covid strains have been imported from amber list countries.

In the three weeks to June 9, of 1,418 people to arrive home from Spain, 1,222 from France, and 484 from Greece, only four tested positive, none with a mutant variant currently of concern to ministers.

Government adviser Professor Robert Dingwall, a public health expert at Nottingham Trent University who sits on the government’s Nervtag advisory group, told The Sun it was time to “stop jumping at shadows”.

“We have a persistent misunderstanding of risk. If you’re double vaccinated, there is very little risk to you from travelling anywhere else on the planet, because the vaccines would work just as well in Kathmandu as in Kenya.

“The concern is that vaccines do not stop you getting a mild infection with some local variant.

“If you bring it back into the country where pretty much everybody else is double vaccinated, they are all protected to the same extent that you are.

“There’s a failure to think this through from a risk management perspective perhaps rather than a public health perspective.”

Prof Karol Sikora, of the University of Buckingham, said: “It’s cruel to ruin everyone’s summer holiday for reasons which simply aren’t backed up by the science.

“Current travel restrictions will not stop new variants coming in anyway because the actual procedures are not rigorous enough. Cases will inevitably slip through.

“The government should either shut down the borders completely and not let anyone in, or open up travel for the rest of us.

“It’s no good preaching about the risks while allowing world leaders to enjoy a jolly on the beach in Cornwall.”

His plea was echoed by senior Conservative MP Sir Iain Duncan Smith, who urged: “Let’s just get this all into some perspective and re-evaluate the risks faced by people.”

The former Tory leader warned: “We cannot totally eliminate the risk but the vaccines should be acknowledged as the game-changer they are.

“There is no reason for the summer to be tough for people who have been double jabbed.” 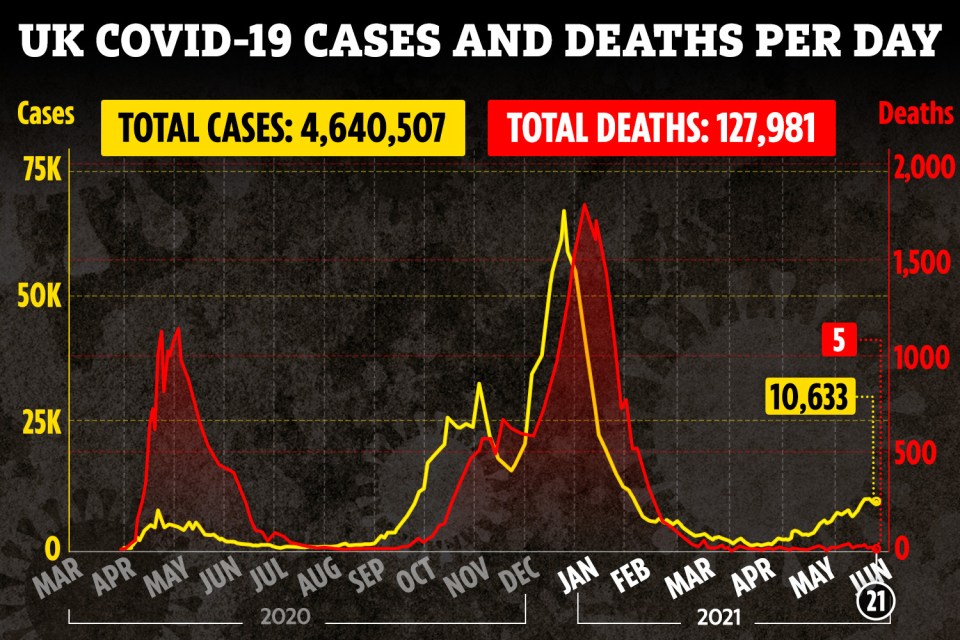 Tim Alderslade, boss of Airlines UK which represents BA, Virgin and easyJet, said the government must follow the data.

He added: “It shows it is perfectly safe to open up travel to many countries while maintaining a robust red list to high-risk destinations.

“If they continue down this road — ignoring the data as well as the effectiveness of their own vaccine programme — they will never open up travel anywhere ever again.”

A Ryanair spokesman said: “We call on Prime Minister Boris Johnson to open up international travel to all vaccinated people without further delay.

“Vaccinated citizens should be immediately allowed to travel freely. It is completely nonsensical to keep vaccinated people locked up when scientific data has demonstrated vaccines are effective against all variants.”

Britain joins US, EU and Canada to slap fresh sanctions on Belarus

He said: “I totally get it. For me it’s been very difficult because I want to go on holiday but I’ve chosen not to because of the restrictions.

“It’s a difficult one to balance.” He said the data from amber list countries was “encouraging”.

However, Brits will not benefit from Germany’s border reopening as its government is to keep in place the entry ban for arrivals from virus variant areas, such as the UK.