A MAJOR row has erupted between Jersey and France over post-Brexit fishing rights.

Prime Minister Boris Johnson has deployed the Royal Navy to protect the island from the threat of a French blockade. Here is everything you need to know about what is going on.

Tensions between Jersey and France escalated following the introduction of a new post-Brexit law on May 1, 2021.

It means French boats fishing off Jersey – which is under Britain’s protection – now need a special licence from the Jersey government.

France is threatening to cut off power to Jersey, which receives 95 per cent of its electricity from France through three undersea cables, in retaliation for the fallout.

One of French president Emmanuel Macron’s key allies, Maritime Minister Annick Girardin, told French MPs: “We are ready to use these retaliation measures.

A fishing vessel in St Helier harbour, Jersey, as French fishermen protest post Brexit changes to fishing in the area on May 6[/caption]

A UK government spokesperson described the threat as “unacceptable and disproportionate”.

They will monitor the situation and also protect the island’s 100,000 citizens who depend wholly on imports for food, medicine and even electricity. 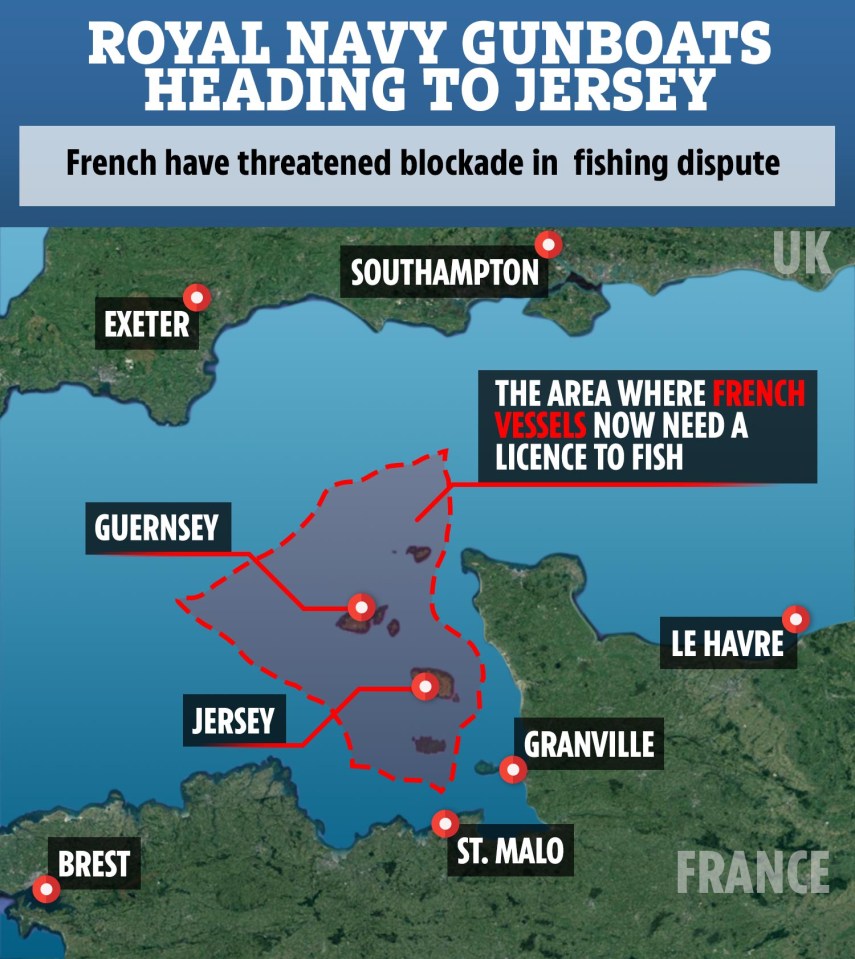 Around 100 French fishing vessels began arriving at the island just after 6am on May 6, with some on board setting off flares.

They are due to launch a blockade as part of their protest, the head of fisheries for the Normandy region, Dimitri Rogoff has said.

David Sellam, head of the joint Normandy-Brittany sea authority, claimed Jersey had been taken over by “people who are not trustworthy” and an “extremist fringe, who want to reduce French fishing access and profit from Brexit”.

He added: “We’re ready for war. We can bring Jersey to its knees if necessary.”

The French vessels are steaming towards Jersey’s main port St Helier, which is narrow and would only take a handful of 150-ton trawlers to block.

Thursday, April 22: French fishermen launch a blockade of UK exports to the continent in protest at lost of access to our waters.

Angry trawlermen besieged the port of Boulogne-sur-Mer, near Calais, accusing No10 of treating them with “contempt” by shutting their boats out.

Europe minister Clement Beaune said Paris will be a “brutal and difficult partner” until it secures more catches.

Friday, May 1: A new post-Brexit law comes into place, meaning French boats fishing off Jersey need a special licence from the Jersey government.

The requirements under the terms of the UK-EU trade deal mean boats must submit evidence of their past fishing activities in order to receive a licence to carry on operating in Jersey waters.

Tuesday, May 4: France threatens to cut off Jersey’s electricity supply.

Angry trawlermen and government officials warn they could cut a cable which runs underwater from Northern France to Jersey.

Maritime Minister Annick Girardin told French MPs: “We are ready to use these retaliation measures.

Is Jersey part of the UK?

STING IN THE TAIL WIND

Killer hornets to invade this weekend after being blown from France

HMS Severn and HMS Tamar arrive at the island, armed with a 20mm cannon, which can fire 700 rounds a minute at a range of 1300 yards, and can travel at up to 20 knots.

Thursday, May 6: Dozens of French boats arrive at the harbour, with some crews setting off flares during the so far peaceful protest.

The Jersey Evening Post said the leader of the protest had asked the French boats to leave the harbour to let a freight ferry, the Commodore Goodwill, depart.