How the world looked the last time David De Gea saved penalty for Man Utd, including no Brexit and Brangelina in love

IT was a different world back when David De Gea last saved a penalty for Manchester United.

The Spanish shotstopper, 30, has come under fire after he failed to save a single spot-kick in the incredible 11-10 penalty shootout defeat to Villarreal in the Europa League final – and then missed with his effort. 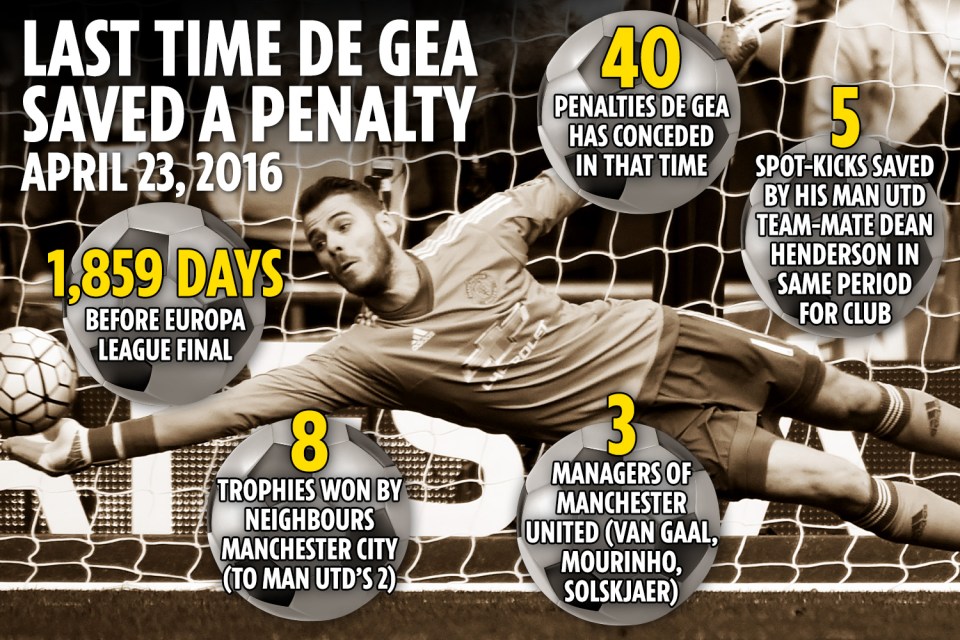 He has now let in the last 40 spot-kicks he has faced and you have to go back to April 23, 2016 for the last time the much-maligned goalie was the hero.

That was when he saved a Romelu Lukaku effort from 12 yards in an FA Cup semi-final against Everton.

Here’s how the world looked – from pop culture phenomenons to political upheavals back then – when Dave last managed to save.

Although US tabloids had you believing there was trouble in paradise for a while, A-listers Brad Pitt and Angelina Jolie were still very much an item.

It later transpired in court documents that the Tomb Raider actress accused Pitt of child abuse, reporting an alleged incident between him and adopted son Maddox on a private jet.

However, this week – after a lengthy court battle – Pitt won joint custody of their shared six children.

In April 2016, Brad Pitt and Angelina Jolie were still a couple[/caption] Months after De Gea’s penalty save, Jolie filed from divorce from Pitt[/caption]

Barack Obama was in his final stretch as US President, completing an eight-year term.

However, Donald Trump was on the campaign trail duking it out with Hillary Clinton.

On November 9, 2016 the reality TV star was elected by the American people.

The outgoing Obama reportedly called Trump to wish him well and congratulate him, despite their differences in the past.

Barack Obama was still US President in April 2016[/caption] Later that year, Trump was voted in replacing Obama[/caption]

Binge watching was beginning to become a thing.

Especially with the rising popularity of Netflix, which would soon release cult phenomenon Stranger Things, which was already being hyped about since the turn of the year.

It debuted on July 15, 2016 although was originally slated for release the same month of De Gea’s penalty save.

On the day De Gea palmed away Lukaku’s effort, we were still in the EU.

An extraordinary 33 million people turned out in force to cast their votes.

The referendum resulted in 51 percent of the votes cast being in favour of leaving the EU. Some four years later, Britain finally left.

Britain was still in the EU and a vote hadn’t been cast for Brexit[/caption] Over 17 million voters voted to leave the EU on June 23, 2016[/caption]

The week of that cup semi-final, Canadian rapper Drake had the No1 single in the country with One Dance.

No doubt it would’ve been played over the PA system to fans at Wembley before the action unfolded.

Incredibly, it stayed top of the charts for 15 weeks – almost equalling the record set by Bryan Adams’ lighter-in-the-air anthem, ‘(Everything I Do) I Do It for You’.

It was taken from the album Views, which would become the No1 record in the country on April 29.

And, at that time, he was praised for introducing youngsters like Dele Alli, Marcus Rashford, Harry Kane, and Raheem Sterling into the Three Lions fold.

However, going with inexperience for Euro 2016 would – in the end – cost him his job.

England finished below Wales in their qualifying group, but scored a favourable draw against Iceland in the last-16.

But we all know how that went. And Hodgson’s contract wasn’t renewed in the summer.

Roy Hodgson was still England boss[/caption] Hodgson was credited with helping young players thrive for the Three Lions, but was ultimately sacked after a poor Euros[/caption]