THE European Union will vaccinate the majority of the population by the end of JUNE, an internal memo has said.

The claim comes as jab centres across Europe are left empty as citizens across the bloc refuse the vaccine.

Citing an internal memo, Bloomberg News reported that Germany, France, Italy, Spain and the Netherlands would have more than 55% of their populations vaccinated by the end of June.

The Commission has claimed that the EU, with a population of 450 million, will receive around 260million does by the end of June in addition to 100million jabs that have been already shipped.

Countries in Europe have been urgently attempting to ramp up what the World Health Organisation branded as an “unacceptably slow” start to its vaccine rollout.

WHO director for Europe Hns Kluge said last week that the bloc’s outbreak was “more worrying than we have seen in several months”.

While the vaccination rate is slowly climbing only 14.2% of the EU’s adult population have been given their first dose, according to Europe’s vaccine tracker.

In the UK, however, more than 31million Brits have been given their first dose totalling 47.3% of the population.

The UK’s figures are more than three times that of the EU’s latest figures.

The claim comes as vaccine centres across Europe have been closing early leaving vaccines unused, despite being in the middle of a third wave.

The poor uptake follows scaremongering by President Emmanuel Macron, who has questioned both the safety and effectiveness of the AstraZeneca vaccine. 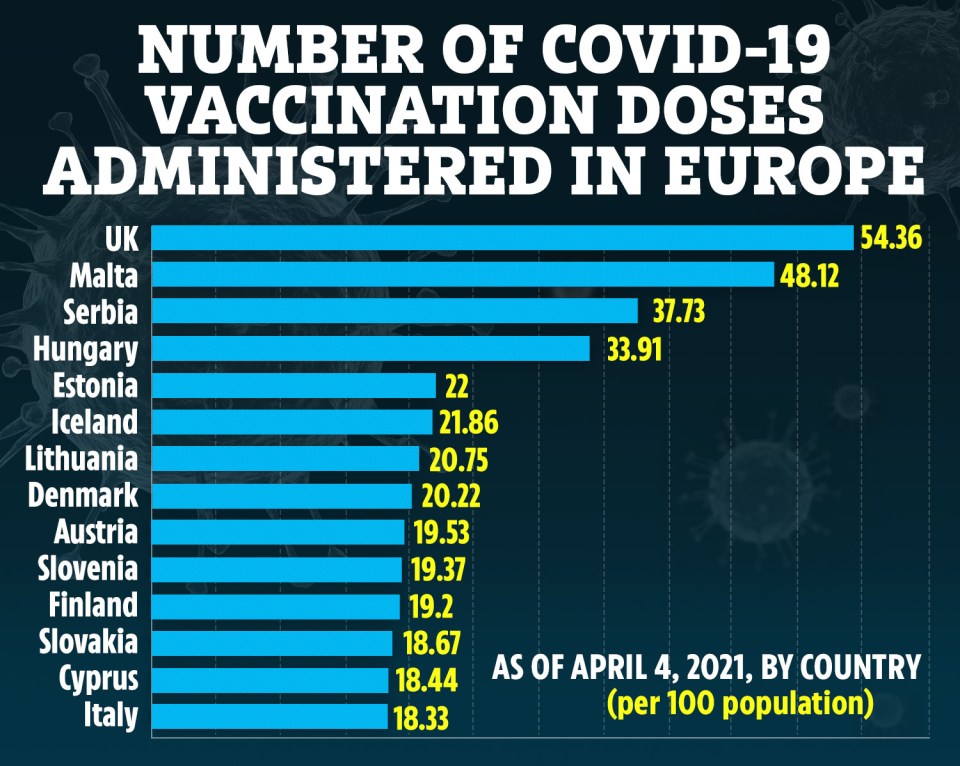 Macron, 43, has been blamed for a lack of public faith the AstraZeneca jab, which he falsely called “quasi-ineffective”.

He has performed a series of U-turns, first saying the jab was not suitable for those over 65, then banning it over unfounded blood clot fears, then saying it should not be given to those under 55.

With hundreds failing to turn up for their jab appointments many vaccination centres no choice but to close early.

Natacha Bouchart, mayor of Calais, said 600 doses had been left unused in the town as people held out for the Pfizer or Moderna vaccine.

“It’s more than a wave of panic. It’s been going on for a week, and Friday was the final blow,” she said.

“There really has to be a national campaign to explain that this vaccine has no more negative consequences than the one from Pfizer or Moderna.”

Meanwhile, in nearby Gravelines, Dr Thierry Mraovic, one of the directors of a vaccination centre, said 600 doses of AstraZeneca had been returned to the manufacturer.

He condemned the policy in France of limiting the use to people over 55 because of a very small risk of blood clots that appear to have affected younger patients.

In the town Valenciennes, to south east of Calais, over 900 doses were left over.

Figures from the European Centre for Disease Prevention and Control show 4.7 million of the AstraZeneca jab have been bought by France but only 2.3 million given out.

Across Europe millions of doses of the jab remain unused, sitting in warehouses.

Italy has been entrenched in an anti-vaccination movement and the recent discovery of Covid-19 clusters in hospitals where staff had refused to get the jab has caused outrage.

To combat this last week the government announced that it would make Covid vaccine mandatory for all health workers in a bid to stop the “no-vax” sentiment.

Those health care workers who refused a vaccination could be suspended without pay for the rest of the year.

In Germany, Angela Merkel is facing growing criticism for failing to spell out policies to reverse the rising infections as cases continue to rise across the country.

Last month thousands of appointments were cancelled in Germany after panic over the safe vaccine, with some 20 countries suspending the use of the AstraZeneca jab.

Pictures of empty vaccination centres show the scale of the problem as millions of people across Europe continue to be left unprotected from the deadly virus.

According to the Thuringian Ministry of Health, the central vaccination centres in Gera and Erfurt have been badly affected, with around 2,800 vaccination appointments cancelled each day.

In Belgium, it was reported that 40% of the healthcare workers in Brussels were refusing the vaccine and blamed the disinformation for the low vaccination rates.

Last month, other countries in Europe suspended the use of the AstraZeneca Covid vaccine due to blood clot fears.

Boris Johnson, UK scientists and regulators say the jab is safe and there is currently no proof it was the cause of fatal blood clots in people who had recently received it.

In a bid to persuade more countries from pausing the roll-out of the jab, the European Medicines Agency (EMA) insisted the rate of clots “in vaccinated people seems not to be higher than that seen in the general population”.

When can pregnant women and children get Covid vaccines? Everything to know

Covid, hayfever or post-vaccine side effects... spot the symptoms

The EMA, currently probing the link between clots and the jab, added that its benefits “outweigh the risks of side effects”.

Yet, despite countries questioning whether it is safe, Brussels was threatening to hoard millions of more doses.