No10 had been braced retaliation after they accused the “bitter” former aide of leaking embarrassing texts from the Mr Johnson’s personal phone.

Denying some of the accusations levelled against him, Mr Cummings claimed: “It is sad to see the PM and his office fall so far below the standards of competence and integrity the country deserves.”

In a lengthy blog posting he also claimed the Prime Minister had tried to stop an inquiry into the leak last year of plans for a second lockdown because it implicated a friend of his fiancée, Carrie Symonds.

He said that he had also warned Mr Johnson against plans to have donors secretly pay for refurbishment of his Downing Street flat, saying they were “unethical, foolish and possibly illegal”.

Yesterday The Cabinet Office confirmed Mr Johnson had met the cost of refurbishments made to the flat himself.

However it had been revealed that originally Tory donors had been approached the secure funds.

The astonishing row follows Mr Cummings’ dramatic departure from No 10 last year amid the fallout from a bitter power struggle with Ms Symonds.

All-out war erupted between the Brexit architects after the livid Prime Minister sensationally pointed the finger at his ex-aide for a string of private text messages handed to the BBC.

Insiders say Mr Johnson was “deeply disappointed and saddened” over his “suspicion” that his former senior adviser made public text messages he had sent to a billionaire business chief and the controversial leader of Saudi Arabia in a bid to damage him. 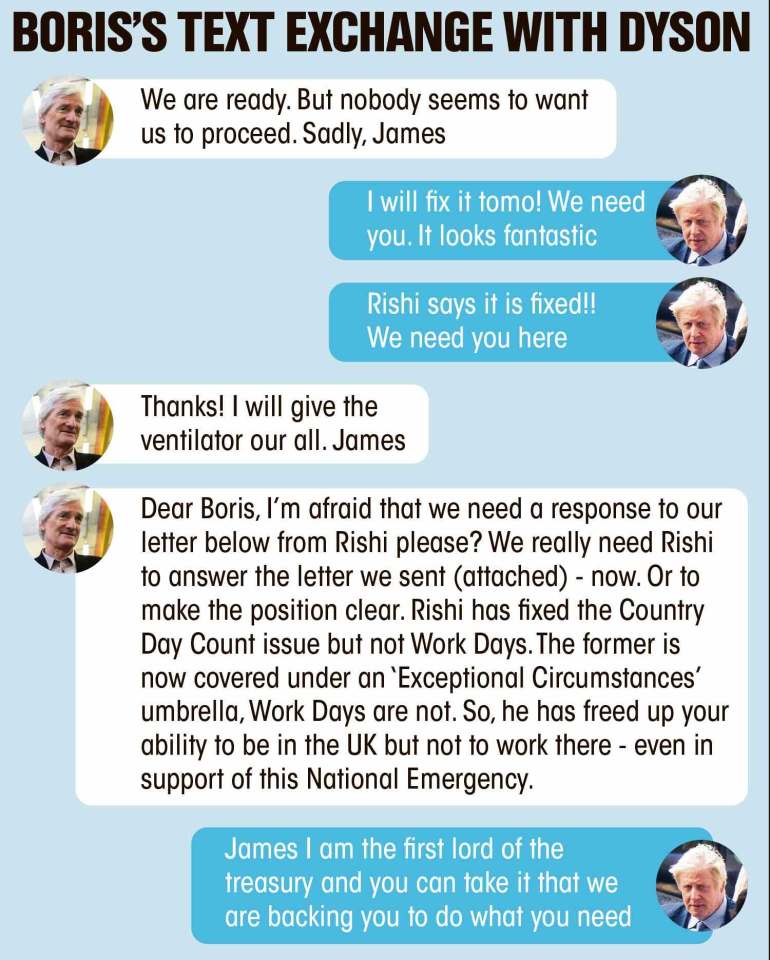 All of the leaked messages were received or sent by Mr Johnson during Mr Cummings time in Downing Street, with the PM understood to often share messages with his inner circle.

But yesterday Mr Cummings hit back at the claims, denying he had possession of the Dyson texts.

He made no mention of the communication with Crown Prince Mohammed Bin Salman in the fiery statement.

His blog post claimed Mr Johnson had “stopped speaking” to him about renovations to the Downing Street flat last year.

The Prime Minister on a campaign visit in Hartlepool[/caption]

He went on “I told him I thought his plans to have donors secretly pay for the renovation were unethical, foolish, possibly illegal and almost certainly broke the rules on proper disclosure of political donations if conducted in the way he intended”.

“I refused to help him organise these payments. My knowledge about them is therefore limited,” Cummings added.

“I would be happy to tell the Cabinet Secretary or Electoral Commission what I know concerning this matter.

Boy, 14, knifed to death after school outside pizza restaurant in London

No masks by SUMMER & life could be 'relatively normal', say No10 experts

WOOD YOU BELIEVE IT

Last night Mr Johnson told reporters on a campaign stop to Hartlepool, he was “mystified” as to why some people have “chosen to attack” his communications with Dyson who was trying to help build ventilators.

“I think people aren’t so much interested in who is leaking what to whom as the substance of the issue at hand.

“The issue is really the question of the ventilators as you will remember James Dyson was offering to make. Let’s be absolutely clear I think it was right to talk to him.”