RISHI Sunak this morning hailed the creation of Freeports across the country as an “incredibly exciting” opportunity to turbocharge the economy after Brexit.

The Chancellor said the foundation of new business hubs up and down England will attract jobs and investments and help power the recovery from the pandemic.

Read our Budget 2021 live blog for the latest news & updates 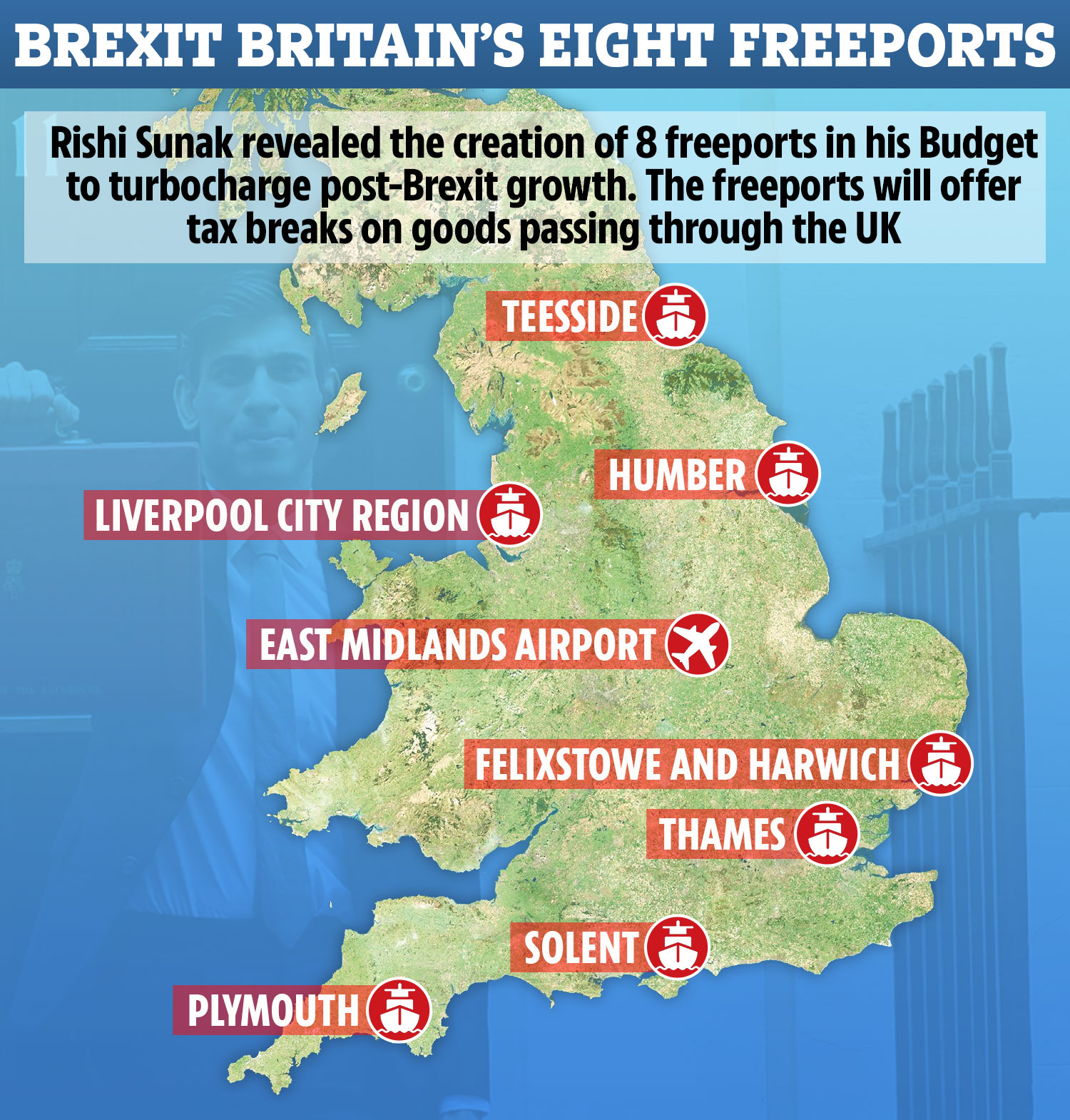 He made the comments during a trip to Teesport, which is one of eight sites that have been chosen to become the country’s next generation of enterprise zones.

Freeports are areas which allow companies importing and exporting from the UK to operate under simplified customs, tax, and planning rules.

They are a key plank in the Government’s plan to diversify our trade away from Europe and strike up commercial links with the rest of the world.

And the new blueprint is also intended to play an important part in kickstarting the country’s efforts to build back from the pandemic.

Mr Sunak said this morning: “Freeports are special economic zones which have different rules that are going to attract jobs, investment, and trade to places like Teeside.

“I’m incredibly excited about what this means. We said we’d level up opportunity across the country, Freeports are an example of us doing that.

“It’s a policy we can fully pursue in a unique British way now we’ve left the EU.

“Freeports are used extensively across the world and the EU is actually one of the few places that doesn’t use them extensively.”

The Chancellor said the US has over 200 such facilities which employ close to 500,000 people there.

And he believes here they can help fuel the growth of new cutting edge industries like carbon capture and storage, offshore wind energy, and vaccine manufacturing.

He added: “All that can happen inside a Freeport with special tax planning and investment and that’s creating jobs across the country, so it’s an exciting agenda.”

Mr Sunak announced the creation of the new generation of eight Freeports in his 2021 budget yesterday.

They will be based at:

The Treasury says the new rollout of Freeports will be “on a scale we’ve never done before”.

It describes the move as “a policy to bring investment, trade, and most importantly, jobs right across the country”.

In the budget documents, officials add: “Internationally, a Freeport is a place to carry out business inside a country’s land border but where different customs rules apply. 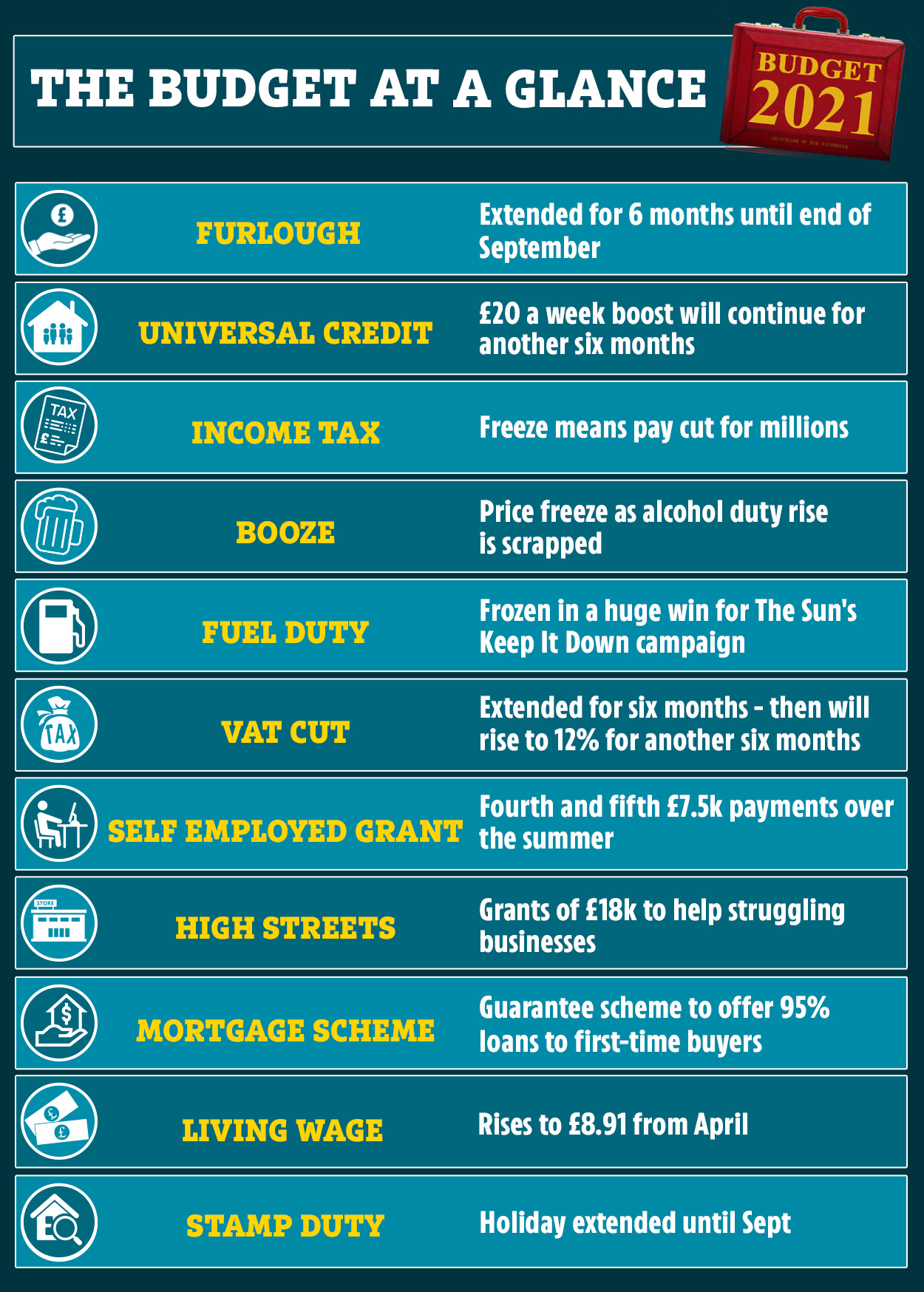 The location of the new facilities in traditional Labour towns – many of them in the Red Wall – is a shot across Sir Keir Starmer’s bows.

Labour’s leader moaned that the budget amounted to “a treasury office in Darlington, a few Freeports, and re-announcing other funding”.

But Tory MP David Davis beamed: “Excellent news in the Budget on Freeports, including Humber. This will greatly increase local investment and employment.”

And Tom Randall, MP for Gedling in Nottinghamshire, added: “Absolutely thrilled that the East Midlands will be home to one of a new wave of Freeports, creating sustainable, green jobs for residents across the region.”

Britain currently has no Freeports but did have seven between 1984 and 2012.

They are allowed under EU rules, although MEPs have warned they create a risk of “money laundering, tax evasion and tax avoidance”.

But Mr Sunak insisted all Britain’s new Freeports will operate strict tax and customs rules so “I don’t think anyone has anything to worry about on that front”.

He added: “What they will do is attract businesses to locate with the tax incentives – invest in new equipment, new plants here, create jobs in places like Teesside or Southampton or Liverpool, and I think that’s exciting.”

Some trade experts have questioned whether Freeports generate much economic value.