VLADIMIR Putin today blasted the “confrontational” EU over the AstraZeneca jab war and even questioned whether it is putting citizens first.

The Russian leader hit back after one top bloc official said it didn’t need Russia’s Sputnik V vaccine despite reports Germany was poised to strike a deal to get hold of it.

Putin described the comment as “strange” and suggested it was at odds with the interests of EU citizens.

He spoke as a new poll revealed most of those living in the biggest member states view the AZ vaccine as unsafe despite the EU’s own regulator declaring it “safe and effective.”

“It’s a strange statement. We’re not imposing anything on anyone,” Putin said at a televised meeting about his country’s vaccine programme.

“This raises a question: Whose interests are these people defending and representing?,” he added, as it was revealed he will receive his vaccine tomorrow.

“The interests of some pharmaceutical companies or those of the citizens of European countries?”

Internal Market Commissioner Thierry Breton had earlier said the EU did not need the Sputnik jab and could achieve immunity across the continent using European production.

The European Medicines Agency (EMA) – whose representatives are set to visit Russia next month – launched a rolling review of Sputnik V earlier this month.

But some European officials have called into question the need for the Russian vaccine.

And one EMA official urged EU members this month to refrain from approving the Russian jab at a national level while the agency was still reviewing it.

Putin also held a phone call with European Council President Charles Michel to discuss the possible use of Sputnik V vaccine against COVID-19, the Kremlin revealed.

Earlier this month, Michel had cast doubt on Russia’s motives for promoting Sputnik V abroad, saying Moscow had organised limited but widely publicised operations to supply the vaccine to other countries.

Putin told Michel that Russia was ready to resume cooperation with the trade bloc but that ties were currently unsatisfactory due to the EU’s confrontational and unconstructive policies at times, the Kremlin said.

Last week, German health minister Jens Spahn confirmed his nation was looking at getting hold of Vladimir Putin‘s vaccine amid the flagging jab rollout across Europe.

He even suggested that Berlin could break with their European partners and go it alone if the rest of the block does not want to engage with Russia.

Speaking at a weekly news conference on Friday, Mr Spahn said he would be in favour of signing a national supply deal with Russia for Sputnik V.

“I can also well imagine that we conclude contracts – and conclude them quickly,” he said.

Mr Spahn added that Germany wants to make clear how many doses can be delivered to them from Russia before putting pen to paper on a deal.

He added: “I am actually very much in favour of us doing it nationally if the European Union does not do something.”

Meanwhile, one Tory MP has warned that the EU’s latest threat to launch a vaccine war against Britain will backfire badly against Brussels.

Andrew Bridgen said the move could even spark an economic crisis in the bloc .

He told talkRADIO that any export ban that the EU imposes would have “major ramifications” on the entire EU economy.

Mr Bridgen also warned that the EU was putting politics ahead of people, since a vaccine ban would not accelerate European vaccination but slow down everyone else. 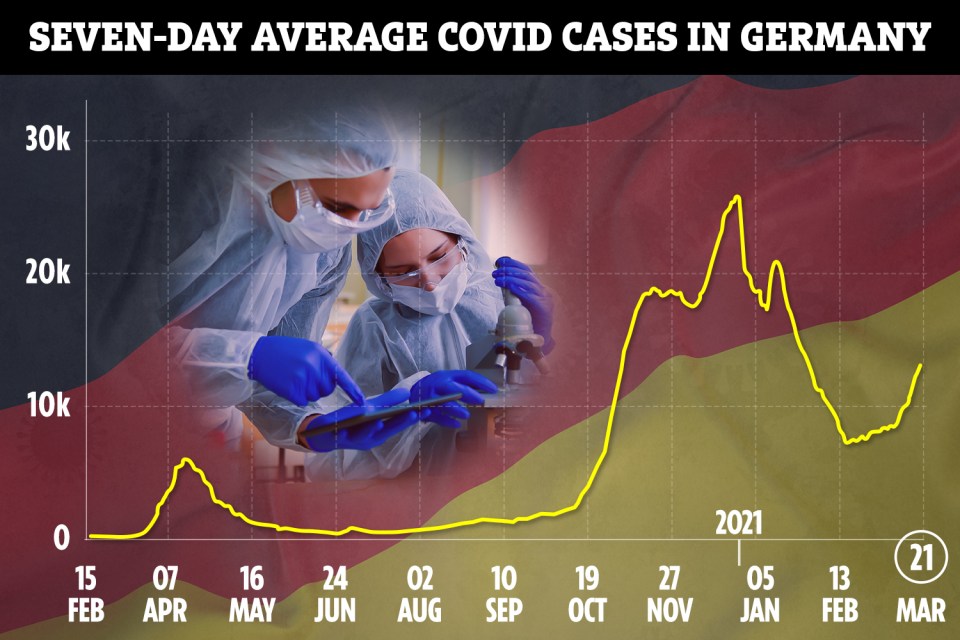 TalkRADIO host Patrick Christys said: “If the EU does decide to nick our vaccine, it would break international law.

“If Britain has a legal contract with a company and then a body of nations like the EU breaks that contract, that is therefore breaking international law.”

Earlier today, we reported how Germany is heading for a harsher lockdown as Europe is hit by a third Covid wave and a botched vaccine rollout.

The Netherlands and Belgium are also warning of tougher restrictions as cases and deaths spike.

The prospect of further curbs will infuriate the thousands of protesters who marched against existing restrictions in the German city of Kassel over the weekend.

Police there used water cannon, batons and pepper spray to disperse the crowds, which they estimated to number up to 20,000.

Protesters also marched in Amsterdam, Vienna, the Bulgarian capital Sofia, and Switzerland over the weekend.

Covid deaths lowest in 6 months as 17 fatalities recorded and 5,342 cases

Europe’s third wave of Covid infections is gathering pace as its vaccine roll-out has seen just eight per cent of its population given at least one dose.

Meanwhile, the UK, which is to begin lifting its lockdown in the coming weeks amid falling cases, has given at least one dose to 40 per cent of its total population.

That has led the EU to threaten to block AstraZeneca’s jabs from coming to Britain in order to shore up its supplies.