THE NHS smashed its Covid vaccines record for the third day in a row with 27 jabs a second.

The figures came as the Government told the EU to “grow up” over threats to blockade millions of doses as the roll-out there continues to flop behind Britain’s. 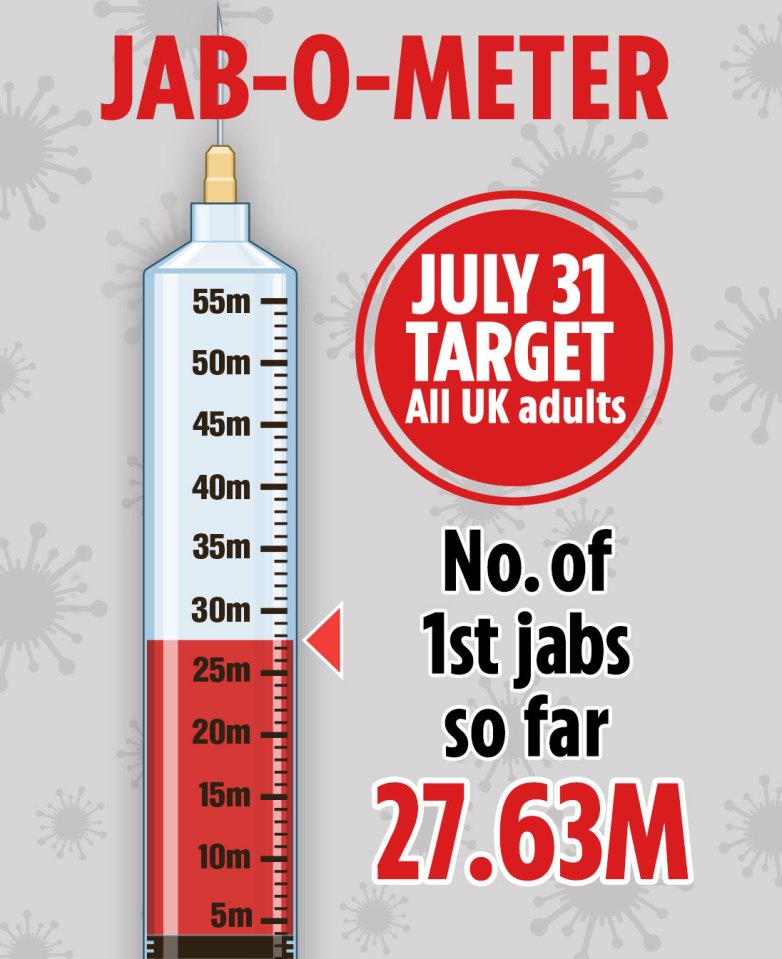 But Brussels chiefs vowed that “nothing is off the table” as they prepared for a crucial summit this week to plot their next steps in the supply row.

The UK’s army of jabbers dished out 844,285 doses on “Super Saturday” — the same as the adult populations of Liverpool, Southampton and Oxford combined.

A total of 27.6 million Brits have now had at least one dose, with Boris Johnson and Health Secretary Matt Hancock thanking the NHS for the heroic efforts.

The PM, who was snapped getting his first dose of the Oxford/AstraZeneca jab on Friday evening, said: “A huge thank you to everyone involved and please come forward to get your jab when you are invited to do so.”

Yesterday daily Covid cases were slightly up at 5,312, but deaths plummeted to their lowest level in five months, with just 33 recorded.

It was also the third Sunday in a row that deaths have been below 100 — but the figures are usually lower at the weekend due to a lag in reporting.

Earlier, Brussels bosses doubled down on European Commission president Ursula von der Leyen’s threats to block jabs coming from the continent to Britain as they continued to play hardball to ­distract from the EU’s own shambolic roll-out.

They were warned that such a move would “cut their nose off to spite their face” and their reputation around the world would be completely ruined.

Just ten per cent of people across the EU have had a vaccine dose so far, compared with more than half of British adults.

EU leaders will host a summit on Thursday to decide whether to take action to stop vaccines getting to the UK.

‘THE WORLD IS WATCHING’

It accused AstraZeneca of failing to fulfil its contract to ­supply the bloc with doses.

Ireland’s commissioner Mairead McGuinness stressed that all options were being considered.

She told the BBC last night: “Both the EU and the UK have contracts with AstraZeneca and my understanding is the company is supplying the UK but not the European Union.

“We are supplying the UK with other vaccines, so I think this is just about openness and transparency.”

But Defence Secretary Ben Wallace said the EU would suffer “severe reputational” damage if it tried interfering with vaccine exports and warned: “The world is watching.”

He hit back: “The grown-up thing would be for the European Commission and some of the European leaders to not indulge in rhetoric but to recognise the obligations that we all have. 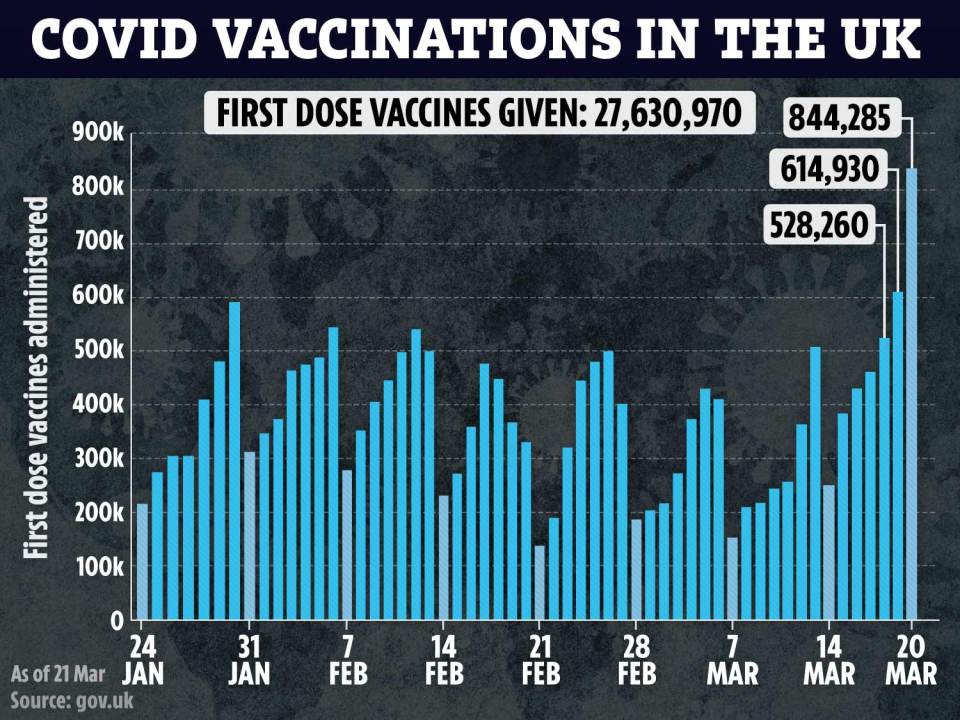 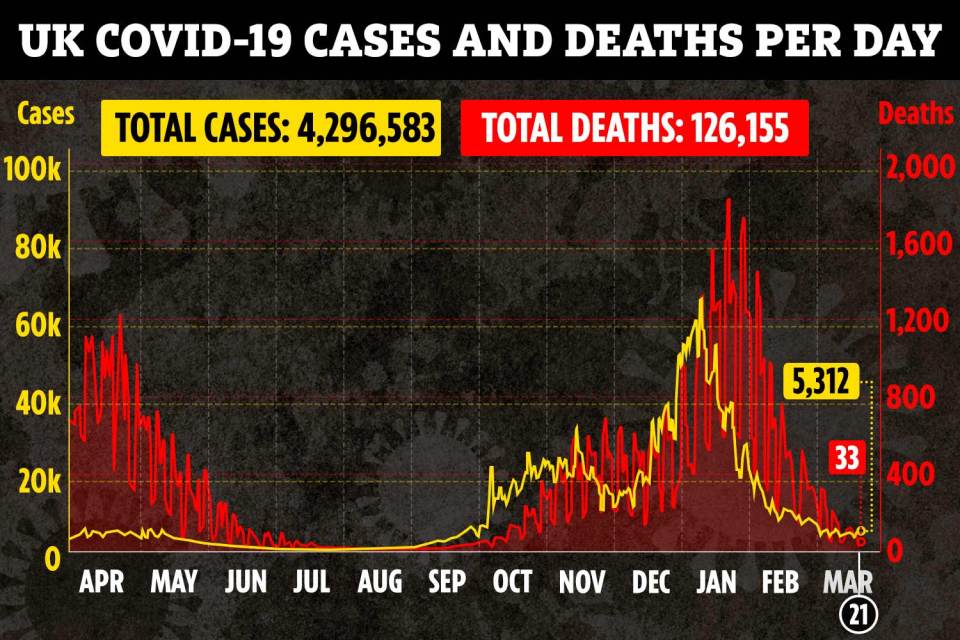 “We will all hold each other to our contracts. Making a vaccine is like baking a cake.

“We all have different ingredients and the European Commission will know that.

“They will know you wouldn’t want to cut off your nose to spite your face.”

He also warned the manufacture of the Pfizer vaccine depended on supplies from the UK.

Mr Wallace went on: “If contracts and undertakings get broken, that is a very damaging thing to happen for a trading bloc which prides itself on the rule of law.”

Last week, EU states across the bloc paused the roll-out of the AstraZeneca jab amid fears over blood clots — only to swiftly U-turn and said it was safe.

Jeremy Brown of the Joint Committee for Vaccinations said the decision was a “strategic error” that will have cost them lives.

He said: “The vaccine programme is pushed back.

“At this point in time, they are having a flood with infection so actually it does represent a delay in the vaccine programme, just when they needed the most.”

Oxford University’s Sir John Bell lashed out at Brussels’ response to a surge in cases and said the continent had “no idea what’s going on”.

If the EU did press ahead with a vaccine export ban, it could set back Britain’s roll-out by up to two months, analysis from Airfinity science service revealed — which would put at risk the PM’s target to jab every UK adult by July.

Meanwhile, polling out today from YouGov showed confidence in the AstraZeneca vaccine’s perceived safety has dropped hugely in the past two weeks in Spain, Germany, France and Italy.

The latest threat to illegally block exports of the AstraZeneca vaccine produced in European factories is another pathetic attempt to demonise Britain and distract from the EU’s calamitous vaccine rollout.

This is a medicine developed by Britain, with millions of pounds of British taxpayers’ money and the brilliance of British scientists.

The British Government put a supply network in place early while the Eurocrats were failing to get their act together.

Far from hoarding the vaccine, as the EU would like to suggest, we have licensed it for use around the world for the good of humanity, not for profit.

It’s a safe and spectacularly effective vaccine that EU leaders have denigrated from the start, for no other reason than that it is a massive post-Brexit British success story which they can’t stand.

And because their disinformation has confused their own people, they have unused stockpiles of the same life-saving AZ vaccine they want to stop others from having, while they have failed to prevent a third wave of Covid.

As Defence Secretary Ben Wallace says, they need to grow up.

Dad, 40, 'who was living dream' lost home and family in matter of weeks

More people there now think the jab is unsafe, despite the European Medicines Agency saying there was no increased risk of clots.

But the row has had a far smaller effect among Brits, with 77 per cent still thinking it is safe, slightly down from before.

Matt Smith, of YouGov, said last night: “After concerns about its protection and potency were raised by leaders across Europe, the Oxford/AstraZeneca vaccine has undoubtedly suffered damage to its reputation for safety on the continent.”