GERMNAY is set to strike a deal with Russia to get hold of its Sputnik V vaccine after the EU jab shambles.

It come as Angela Merkel has been urged to go back into total lockdown as daily new Covid cases surged to their highest since January.

German health minister Jens Spahn confirmed the EU nation is looking at getting hold of Vladimir Putin‘s vaccine amid the flagging jab rollout across Europe.

He even suggested that Berlin could break with their European partners and go it alone if the rest of the block does not want to engage with Russia.

Speaking at a weekly news conference on Friday, Mr Spahn said he would be in favour of signing a national supply deal with Russia for Sputnik V.

“I can also well imagine that we conclude contracts – and conclude them quickly,” he said.

Mr Spahn added that Germany wants to make clear how many doses can be delivered to them from Russia before putting pen to paper on a deal.

He added: “I am actually very much in favour of us doing it nationally if the European Union does not do something.”

Germany is facing a third wave of Covid as the continent struggles with its vaccine rollout – including the chaos over the suspension and then rapid U-turn over the safe AstraZeneca jab.

Merkel’s nation recorded 17,860 new cases yesterday, its highest in two months, as the seven day moving average has been creeping up since the middle of February.

Health officials have warned Covid is spreading at an “exponential rate” as the mutant variants begin to surge in Germany.

Mr Spahn admitted that the country may have to “take steps backwards” and confessed that Germany’s vaccine plan was not enough to stop the third wave. 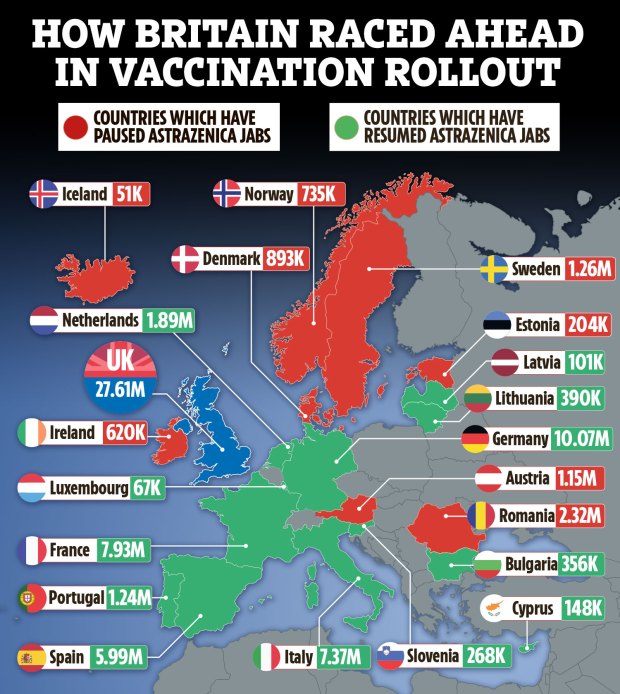 Three days were lost in Germany’s already flagging vaccination program due to the suspension of the AstraZeneca vaccine over baseless fears of blood clots.

So far only 8.5 per cent of the population has had their first jab, far behind the likes of Britain and the United States.

Regional leaders have called on Merkel’s government to speed up its review of Putin’s Sputnik V vaccine as they try to catch up.

Berlin mayor Michael Müller lamented “we need every vaccine we can get” and Bavarian premier Markus Söde said they need to “accelerate” the approval of Sputnik V.

“We need to approve it quickly and efficiently, not get bogged down in the classic, bureaucratic details,” Sode said.

If approved Sputnik V would become the first non-Western coronavirus jab to be certified for use across the EU.

It would also be a major PR win for Russia who faced questions last summer when it announced the creation of the jab – which was claimed to be world’s first vaccine against Covid.

Sputnik V’s developers claimed Monday that they had production deals with companies in Italy, France, Spain and Germany.

German public health expert  Karl Lauterbach warned against travelling at Easter as he suggested the nation could have to return to lockdown.

“With every week that we start later, we lose two to three weeks backwards,” he said, reported Bild.

Thousands of jab appointments have been cancelled after the panic which saw 20 countries ditch the jab.

The GP branded the situation “chaos” as EU nations suspended use of the AZ vaccine – which was the “most stupid thing to do in a pandemic”.

Even though the European Medicines Agency last night finally concluded the jab was safe, the top doc said they have now lost valuable time in the fight against Covid.

Dr Kröner raged the the suspension may have already “ruined” flagging European trust in the vaccine after misinformation was spread by the government’s of Germany and France. 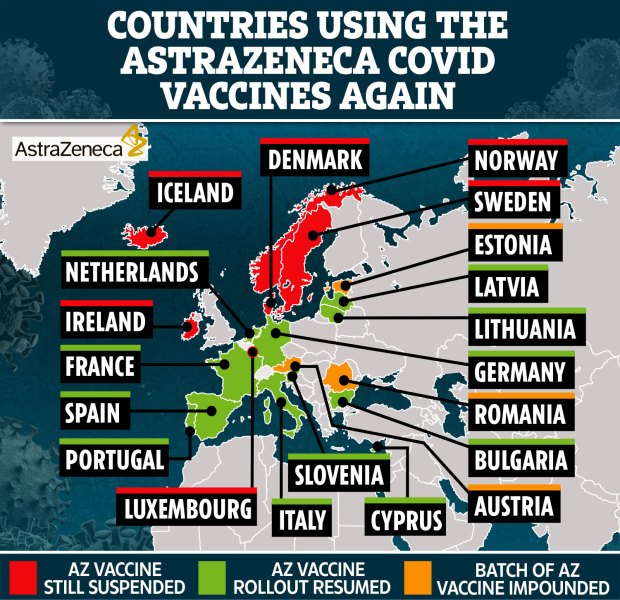 Within minutes of regulator EMA’s announcement, Italy became the first state to announce it was going to restart use of the AZ vaccine.

Matteo Salvini, leader of Italy’s biggest party Lega, said heads should roll over the fiasco and urged “full steam ahead” on deploying the AstraZeneca shot.

France and Germany also restarted use the vaccine today, with French prime minister Jean Castex being pictured getting incolated with the jab.

However in yet another confusing U-turn, France has now recommended that people under the age of 55 do not get the jab due to fears of blood clots – despite it being declared safe by the EMA.

Rapist cleared of attacking girl, 14, with some of worst injuries doc had seen

It is the third change to the country’s vaccine policy in quick succession and follows French President Emmanuel Macron himself claiming the jab was “quasi-ineffective on people older than 65, some say those 60 years or older”.

Meanwhile, France’s ambassador to the UK got the AstraZeneca vaccine on the NHS while the jab was still BANNED by her own nation.

Latvia, Lithuania, Cyprus, Luxembourg and Slovenia are also due to resume use of the vaccine today, while Portugal will resume on Monday, Spain and the Netherlands next week.

It comes as Emer Cooke, the EMA’s executive director, said she would take the Covid vaccine “tomorrow” if offered – after debating on its safety for days while the UK continues to steam ahead, now having almost 40 per cent of the population jabbed.