THOUSANDS more people will die because of the EU’s kneejerk ban on the AstraZenca vaccine, a German doctor has raged.

Dr Christian Kröner fumed at the “stupid” decision as he said nations like Germany and France should have followed Britain’s “smarter” example after the shambolic jab rollout across Europe.

The GP branded the situation “chaos” as many EU nations suspended use of the British made and safe AZ vaccine – which was the “most stupid thing to do in a pandemic”.

Bloc nations cited unsubstantiated fears of “blood clots” – which had so far effected just 0.0003 per cent of the millions who have received the jab.

And even though the European Medicines Agency tonight finally concluded the jab was safe, the top doc said they have now lost valuable time in the fight against Covid.

Thousands of jab appointments have been cancelled after panic, with some 20 countries suspending use of the AstraZeneca jab.

Dr Kröner told The Sun Online that the suspension may have already “ruined” flagging German trust in the vaccine.

Many people were already reported to be refusing the jab in Europe after baseless doubts were sowed by Angela Merkel’s government and French President Emmanuel Macron.

Dr Kröner said: “We can’t wait any longer, every single day we are not vaccinating costs lives.

“That is potentially thousands of lives of people who won’t be here next Christmas because of this chaos.

Every single day we are not vaccinating costs lives

“One of the main issues is that if the government hears there is a low risk, they think we must stop vaccinating.

“But it is the most stupid thing to do in a pandemic because every day we are losing around 300 people across the country to Covid.

“I am so angry about the suspension. Nothing has changed from my point of view. The vaccine is still safe.”

Pictures of empty vaccination centres show the true depressing scale of the problem as millions of people across Europe continue to be left unprotected from the deadly virus.

“There has been serious misunderstanding among a lot of German people, and a lot of rumours,” added Dr Kröner.

“The UK strategy has been a lot smarter – I just want them to follow suit and get the vaccines out.

“It seems a lot of people who have no idea about vaccination campaigns are directing things they have no clue about.”

He added that after Macron wrongly claimed at the end of January the AstraZeneca jab vaccine was ineffective in over 65s, “it had been a really hard time” in terms of persuading people of the benefits. 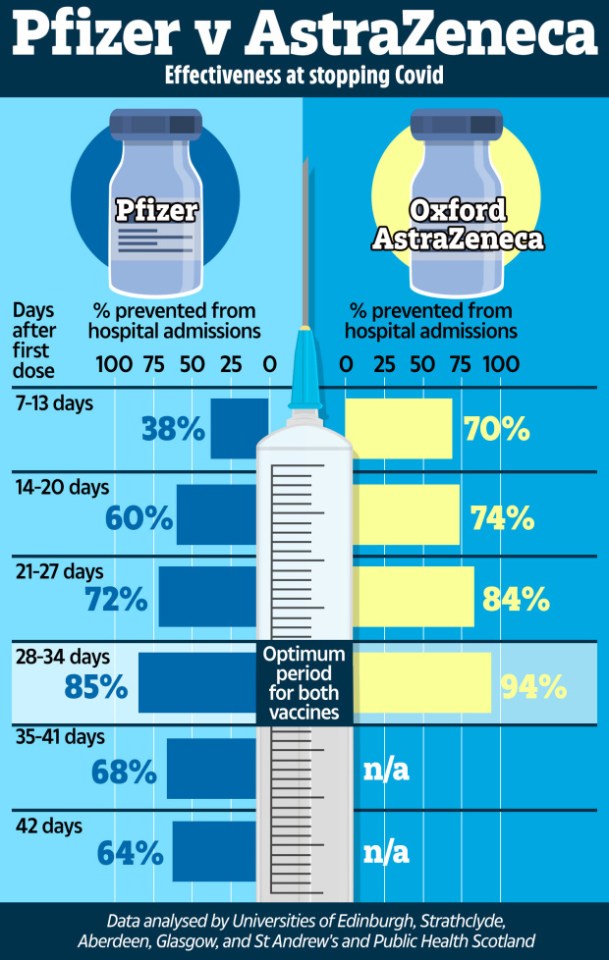 “And now there will be even more of a hard time selling it to the German people after this suspension,” Dr Kröner added.

“It has just ruined it. I hear it every single day that people just refuse to take AstraZeneca now.

“We brought ourselves a problem we really didn’t need. It would have been smarter to continue to vaccinate.

“It has really angered me as I have been fighting this for months, seeing people dying and suffering the effects of long Covid problems, and our solution has just been suspended.”

Meanwhile, the number of Brits inoculated against Covid has surged past 25 million.

England’s deputy chief medical officer Professor Jonathan Van-Tam said that “vaccines don’t save lives if they’re in fridges” as he sought to reassure the public after European countries suspended the vaccine over isolated cases of blood clotting.

The panic over blood clots is just the latest block on EU residents getting their jabs – following problems over supply, lack of trust in the vaccines, and a chaotic rollout.

EMA executive director Emer Cooke said the cases of blood clots in recently vaccinated people was still being analysed “tirelessly” by a range of experts.

Despite having the conclusion of the EMA’s investigation, many dithering nations have already lost a full three days of vaccinations.

“We are seeing the pandemic in slow motion and we need to get as many people through this catastrophic event as quickly as we can,” urged Dr Kröner.

“In Germany, we are good at getting things absolutely safe but we are not good at making quick decisions. That is where we need to improve.

“We are in big chaos and too many people are worried about legal issues or missing some tiny risk rather than seeing the bigger picture of getting as much vaccine out to the people as we can.”

The Sun Online previously spoke to German doctor Daniela Stock, a consultant at a hospital in Cologne, who revealed hospitals had received as few as THREE jabs during the the chaotic vaccination program.