EU countries are like “pioneers in a Western movie surrounded by Indians” as new Covid cases surge by 50 per cent amid the bloc’s jab fiasco.

The rocketing number of infections across the continent is feared to be the start of a third wave as pitiful numbers of people have been vaccinated because of chronic shortages.

The EU meanwhile has it struggles to vaccinate its people[/caption]

In Italy, infections jumped by 50 per cent in a fortnight with about 300 deaths each day.

Meanwhile, in Hungary, infections have more than doubled in 14 days, while scientists in the Czech Republic believe the country could achieve herd immunity without jabs because infection rates are now so high.

We’re waiting for the vaccines like pioneers in a Western movie, surrounded by Indians

The UK, until recently one of the worst-hit countries in the world, has less to fear from a third wave because of its successful vaccine roll-out.

UK PM Boris Johnson, however, has warned Europe’s Covid surge could hit the UK despite the speedy vaccine rollout as he rejected calls to ease lockdown more quickly.

The Prime Minister raised fears the UK could “follow the upwards curve” being seen among countries in Europe as they battle to get to grips with rocketing Covid rates.

The EU has given first doses to just six per cent of its population so far compared to 33 per cent in the UK.

Earlier this week the EU’s bungled jab rollout suffered yet another serious setback after another 55 million doses have been delayed.

Johnson & Johnson has told it is facing supply issues that may complicate plans to deliver all the vaccines the bloc has ordered for the second quarter of the year.

It comes after Pfizer also cut supplies to the bloc, vowing to make up for it with larger-than-expected deliveries later this year.

The British/Swedish firm AstraZeneca has also slashed its delivery to the EU in the first quarter of this year, sparking a huge row with Eurocrats.

Much of the third wave has been fuelled by the new “British variant” of the virus that was first detected in Kent. 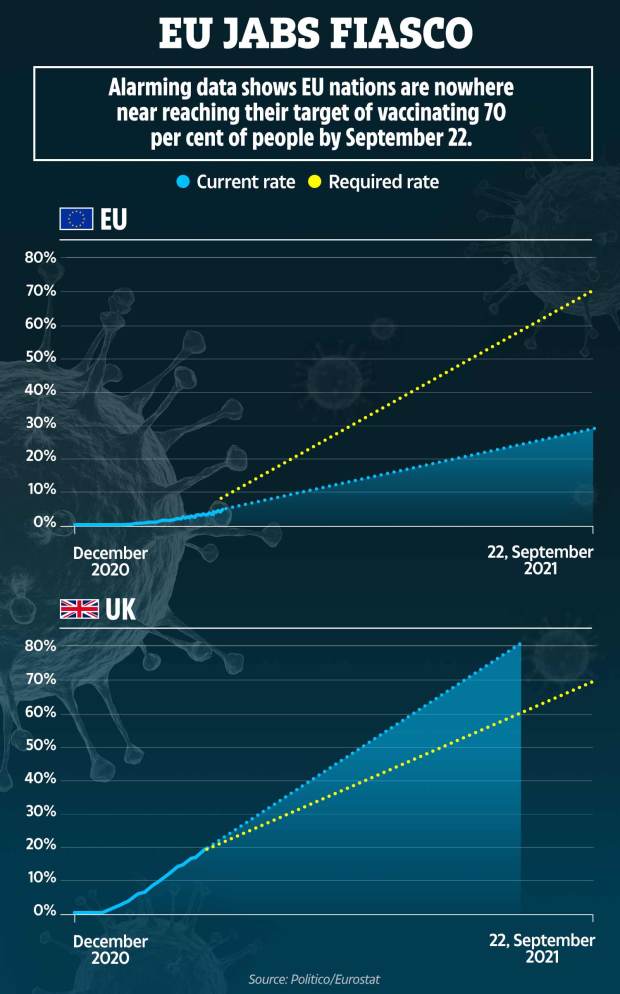 DID HE USE COP ID?

But while Italy and much of Central Europe have seen a steep rise in infections over the past fortnight, in Germany and France the number of new cases has largely plateaued.

Germany, which Angela Merkel declared was in the grip of a third wave a week ago, has not yet seen a big rise in cases..

France has been in a third wave since the start of the year but the infection rate has flattened since late January.

Spain and Portugal appear to be past the third wave, with infections dropping steeply.

Johnson & Johnson has told it is facing supply issues that may complicate plans to deliver all the vaccine the bloc has ordered for the second quarter of the year, an EU has said.