DESPERATE EU bureaucrats tried to block AstraZeneca vaccine exports to Britain last night as the UK told the bloc to “grow up.”

The European Commission said it would ensure that a jab facility in the Netherlands that is contracted to supply the UK with AZ doses would keep the remedies in the EU.

Run by drugs firm Halix, the Leiden-based plant is listed as a supplier of vaccines in both the contracts that AstraZeneca has signed with Britain and the European Union.

An EU official said: “The Brits are insisting that the Halix plant in the Netherlands must deliver the drug substance produced there to them. That doesn’t work.

“What is produced in Halix has to go to the EU.”

Britain has insisted that contracts must be respected.

This comes as EU member states are set to debate a vaccine export ban to the UK next Thursday.

Meanwhile, European Commission President Ursula von der Leyen threatened to join forces with France and Germany to hold hostage over 19 million AZ jabs scheduled to be shipped to the UK.

Number 10 has told the EU to “grow up” over their blockade threats as their rollouts continue to flop behind Britain’s.

Combined with a sharp rise in infections, the EU’s shambolic jab programme has seen large swathes of the continent plunged back into lockdown in the past week.

The EU’s vaccine rollout has been a disaster[/caption]

He told Sky News that “the world is watching” adding “the grown-up thing would be for the European Commission and some of the European leaders to not indulge in rhetoric but to recognise the obligations that we all have.”

But the EU official said the bloc was not breaking any contract.

AstraZeneca has not yet sought approval in the EU for Halix, but the official and a second EU source said the request was on its way.

Without regulatory approval, vaccines produced at Halix cannot be used in the EU.

An internal AstraZeneca document shows that the company expects EU approval on March 25.

AZ has declined to comment on the amount of vaccines that are currently stockpiled at Halix.

The EU official said the factory had already produced shots, but was not able to quantify the output.

Under the bloc’s contract with AstraZeneca, vaccines must be produced before approval and be delivered immediately afterwards.

Two factories in Britain run by Oxford Biomedica and Cobra Biologics are also listed as suppliers to the EU in the contract with AstraZeneca, but no vaccine has so far been shipped from the UK to the continent, despite Brussels’ earlier requests. 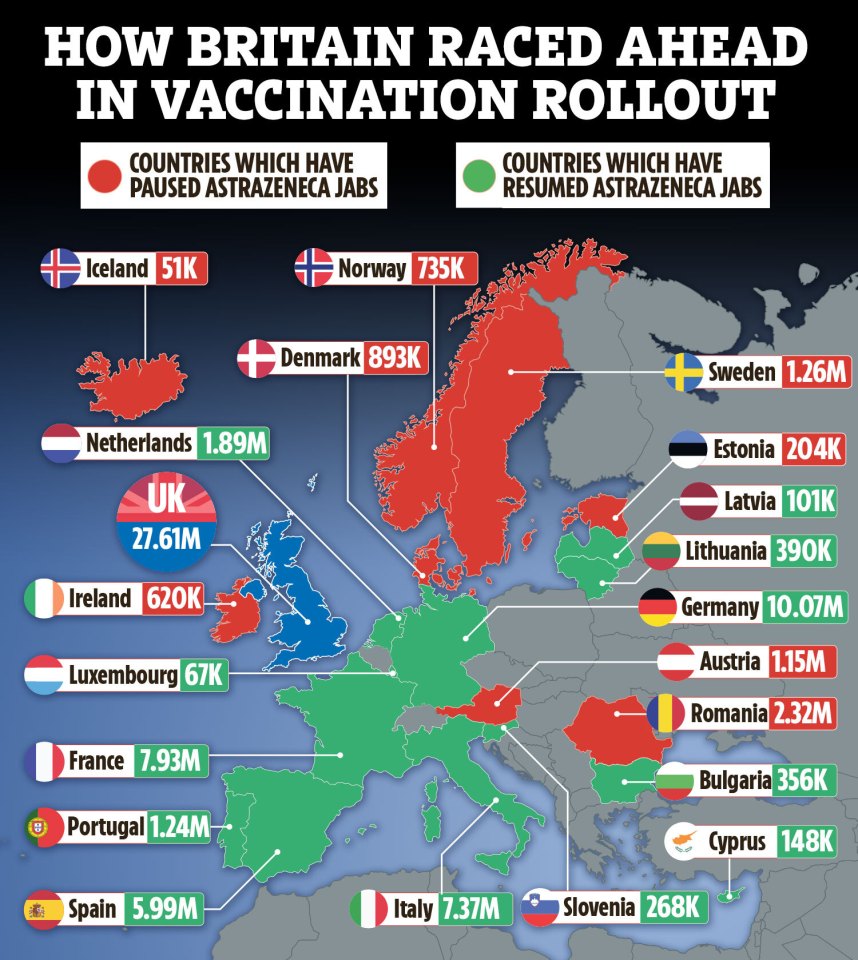 Officials have said that Cobra is not fully operational.

AstraZeneca told EU officials that the UK is using a clause in its supply contract that prevents export of its vaccines until the British market is fully served, EU officials said.

This comes as Britain’s vaccine rollout faces a two-month delay if EU members states go ahead with the jab export ban.

And according to analytics firm Airfinity, the move would NOT provide a significant boost to beleaguered vaccine rollouts in the European Union.

Research shows that the number doses kept within the bloc would speed up EU vaccinations by “just over a week.”

Yet, an export ban of the Pfizer/BioNTech vaccine made in Belgium and Germany would delay every British adult receiving a first jab until August 5, reports the Guardian.

And a further ban to all jab exports, including those from Moderna and Johnson & Johnson, would delay the rollout target even further to August 27, the report says.

Following a year living with Covid restrictions, a new report by the Daily Mail claims to show the true cost to the UK economy.

The report says that draconian measures are costing £500m per day in lost output whole adding £1bn to the national debt.

Yet, despite the crisis, Britain’s vaccine rollout continues to set records.

The UK, like Boris Johnson, bounces back...and the EU hates it

Dad, 40, 'who was living dream' lost home and family in matter of weeks

On Saturday, the UK smashed its daily vaccine record for the second day in a row with 844,000 more jabs administered across the UK in 24 hours.

And while our European neighbours are plunged back into stricter lockdowns, UK Covid deaths on Sunday dropped to their lowest level in five months with 33 more fatalities recorded.

A further 5,312 people have also tested positive for the disease – bringing the total number of infections since the pandemic began to 4,296,583.