BORIS Johnson has tonight unveiled a new jab super factory to wean Britain off foreign made vaccine supplies in light of the EU’s export ban threats.

The PM revealed the mega facility will be set up in the Red Wall after green-eyed Brussels threatened to cut off shipments from plants on the continent.

The plant run by drugs giant GlaxoSmithKline in Barnard Castle, County Durham, will be tasked with finishing and bottling 60 million doses starting in May.

It will be used to process the Novavax jab, which is currently awaiting approval from the UK’s medicines regulator (MHRA) and will be made at Stockton-on-Tees.

The PM made the announcement at a No 10 press conference to mark the first major step in the lifting of England’s lockdown today.

He said: “At the same time as we push forwards with our programme to offer a vaccination to all adults by the end of July, we’re building up our own long-term UK manufacturing capabilities.

“Novavax, a potentially significant new weapon in our armoury against Covid, is going to be made at FujiFilm in the North East.

“I can today announce that the Vaccine Taskforce has reached an agreement with GlaxoSmithKline to finish and bottle this precious fluid also in the North East, giving us between 50 and 60 million doses of UK made vaccine subject to the right approvals from the MHRA.”

Health secretary Matt Hancock added: “We’ve all seen just how important onshore vaccine manufacturing capabilities are, and this fantastic deal will ensure more of these vital products can be produced here in the UK.

“The UK’s vaccination programme has been a national success, with over 30 million people now having received a first dose of a COVID-19 vaccine.

“Should the Novavax vaccine meet our medicines regulator’s high standards of safety and effectiveness, the agreement reached today will boost these efforts over the coming months.”

The news the factory will be in Barnard Castle raised eyebrows after the town was at the centre of ex No 10 chief aide Dominic Cummings’ lockdown-busting exploits last summer.

He memorably claimed a 30-mile trip from his cottage near Durham to the picturesque tourist spot was to test his eyesight before making the long drive back down to London.

The announcement comes after months of bitter wrangling between Britain and the EU which has threatened to escalate into a cross-Channel vaccine war.

Brussels has repeatedly threatened to block shipments of life-saving jabs to the UK unless we send more doses from our factories to the continent.

It complains that 10 million doses – mostly of the Pfizer vaccine – have been sent from Europe to the UK but none have gone the other way.

Tensions started in January when it announced an export crack down on companies not fulfilling delivery targets with the bloc, namely AstraZeneca.

The Commission boss unveiled new rules targeting shipments going to countries that are doing better with their vaccine rollouts and fighting the pandemic.

But she was brutally snubbed by EU leaders during a video call on Sunday as they failed to back her controversial plans.

Countries with big pharma industries – like Belgium and the Netherlands where Pfizer and AstraZeneca are made – are wary of disrupting supply chains.

Angela Merkel is also worried about sparking a vaccine war with the UK that could badly hit European production. 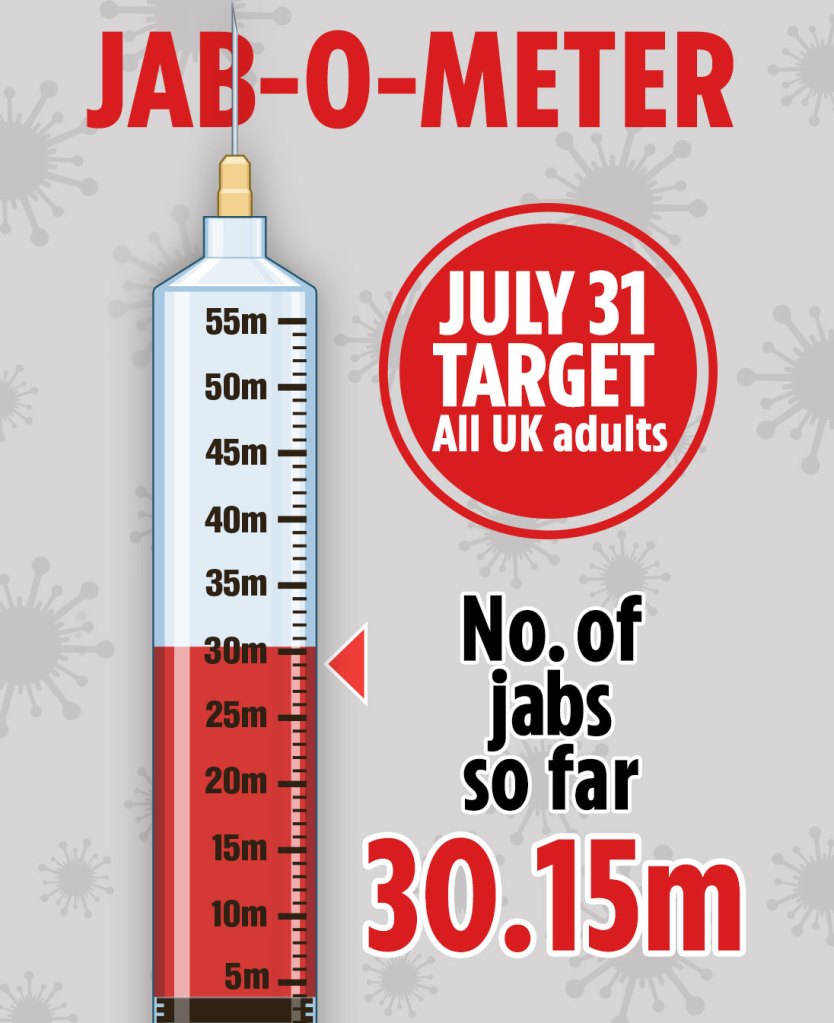 Talks between Brussels and No 10 on a deal over supplies, to avoid the threat of an immediate export ban, are also said to be going well.

Both teams were even given the weekend off to see their families amid high expectations an agreement could be struck this week.

But despite the detente senior French politicians have still risked sparking tensions by attacking our successful rollout.

Internal market commissioner Thierry Breton, the country’s top eurocrat, threatened to block all shipments of AZ from leaving the continent.

He said: “As long as AstraZeneca has not fulfilled its obligations, everything that it is produced inside the EU will be given to Europeans.”

And he added: “I can understand why some people are using this incredibly difficult period to justify their own choices, such as Brexit, for example.

And president Emmanuel Macron also needled Britain, insisting it is “completely false” to credit Brexit for the UK’s superior rollout.

He even claimed: “In a few weeks, we will have completely caught up with the British, who will depend more and more on us to vaccinate their population.”

Such the sabre-rattling from eurocrats and countries like France has unnerved No 10 and made it determined to secure our long-term supply.

Britain’s vaccine rollout is racing way ahead of Europe’s, with EU leaders under huge pressure to explain why we’re performing so much better.

The UK has now given 45% of the people at least one dose, while in Europe that figure stands at just one in 10.

Mrs Merkel today blamed her country’s snail-paced jabs drive on the “perfectionism” of the German state.

She said: “Perhaps we’re very perfectionist at times and want to do everything right, because obviously whoever makes a mistake always aces quite a lot of public criticism.

“But there needs to be flexibility too. That, I believe, is an attribute that we as Germans perhaps need to learn a little bit more, alongside our tendency towards perfectionism.”

And a new poll showed more than a quarter of Germans blame Mrs von der Leyen for the continent’s shambolic rollout.

Much of Europe is being plunged back into harsh restrictions as the continent battles a spiralling third wave.

In contrast, the PM today hailed Britain’s first major step out of lockdown with outdoor sports and mixing now allowed to resume.

Boris Johnson warns there WILL be more deaths as lockdown eases

HOLDUPS ON THE LINE

Woman performs subway striptease as she reveals lingerie under coat

Suez Canal megaship is finally FREED and is moving down channel

As of today up to six people, or two different households, can meet up outside including in private gardens, and the Government’s “stay at home” message is formally dropped.

Brits are now allowed to travel across the country to see friends and family, but, they must only meet up in the open air and overnight stays are still banned.

Outdoor sports and leisure facilities like swimming pools, golf courses, and football pitches are also reopening as of today with Covid-secure measures in place. 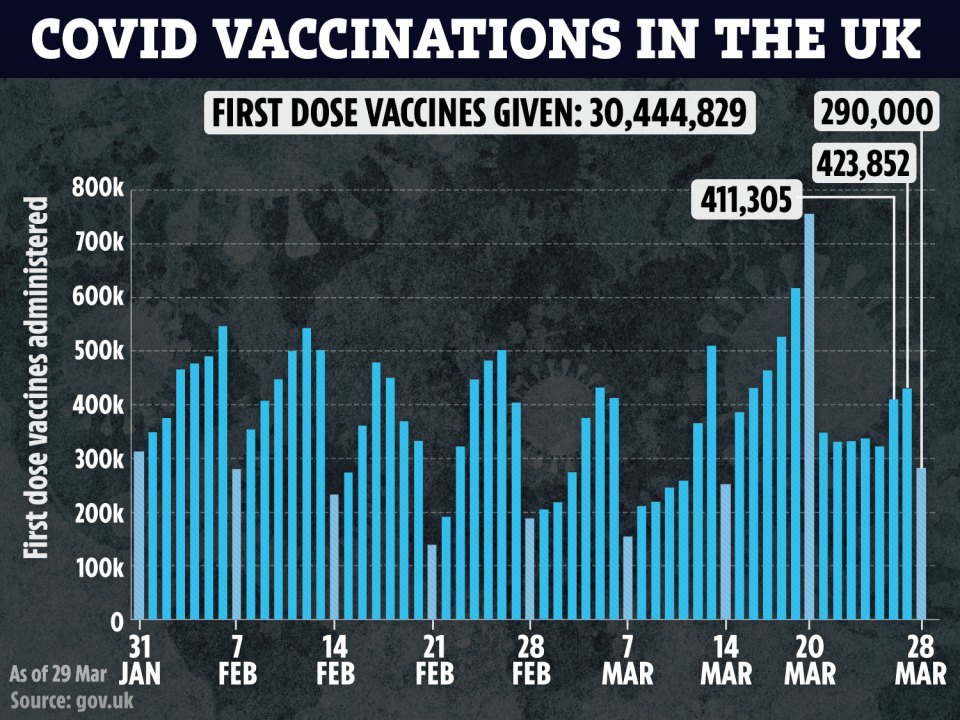 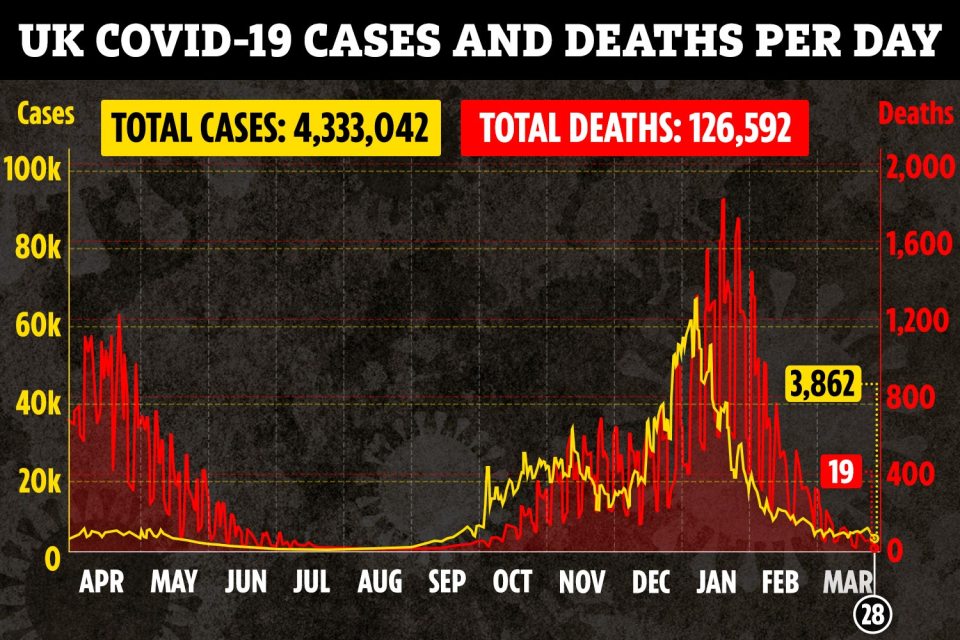